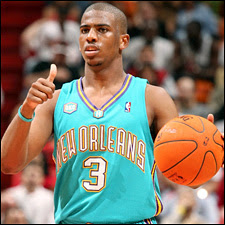 Chris Paul is the heart and soul of the New Orleans Hornets. Subtract him and the Hornets franchise will be back to square-one and with his impending free-agency, the Hornets will do all it can to keep their star in a Hornets uniform.

But will he leave New Orleans for a chance to play for the Charlotte Bobcats and Michael Jordan who he calls his mentor?

In an interview Tuesday with The Associated Press to promote Saturday’s Jordan Brand Classic high school basketball game in Charlotte, the guard said signing with the Jordan-owned Charlotte Bobcats n 2012 “would definitely be something to think about.”

New Orleans will have to prove to Paul they are making strides to regain their status as a Western Conference power as they were a few years ago. Paul has voiced displeasure in the past with the Hornets but the addition of head coach Monty Williams, forward Carl Landry, and making the playoffs despite the loss of All-Star David West should comfort Paul once his current contract is up and becomes a free-agent in 2012.