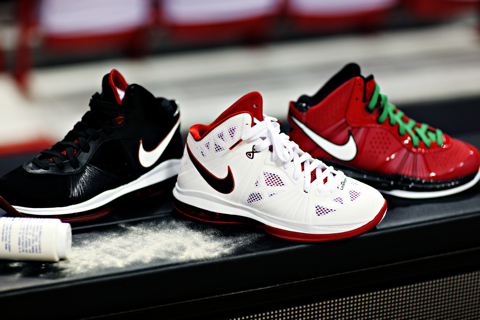 Driving to the American Airlines Arena again for what has felt like the thousandth time wouldn’t seem at first glance to be anything special for me at this point of the NBA season.

Nike had invited me to check out their new LeBron 8 PS signature model on the eve of James’ first playoff game as a member of the Miami Heat. Little did I know that an hour into the event I’d be running drills right on the court with a team of Nike trainers.

A group of about 20 of us had congregated at the waiting area inside the AAA where we were then herded through Championship Alley by a Heat representative. Although I’ve walked through Championship Alley hundreds of times already, I was surprised to find ourselves walking through a door that had always seemed closed before and taken to an area I would never think still existed, the old Miami Sol locker room, which was being used today by Nike for their presentation. Waiting for us was a huge bundle of Nike goodies that all us wanted to sift through immediately like Ralphie looking for his Red Ryder BB Gun. 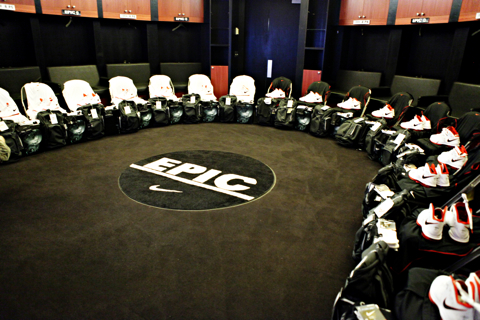 Patience had to be practiced though as LeBron 8 designer Jason Petrie expertly guided us through Nike’s vision of the LeBron 8 as well as its history and how it all tied together with the present and their newest shoe for their star athlete.

“The LeBron 8 PS. Playoff shoe. Big moment for LeBron. But it all starts somewhere, right? We started this journey with LeBron on the 8 right after the playoffs last year and we were kind of picking his brain, he hadn’t made his decision or anything at this point, but after chewing it up for a little bit we got to this notion of ‘transform’. 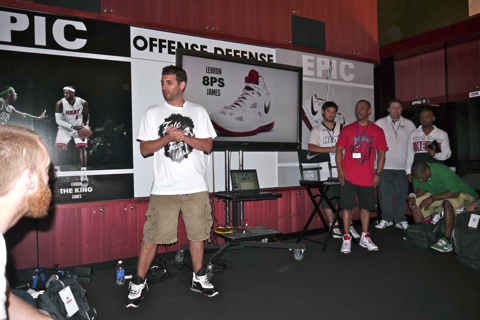 “And that could mean a ton of different things but what LeBron has told us for a while now is that he really looks at the season in two buckets. There’s the 82 game marathon and there’s the 28 game sprint at the end of the season.

“If you think about a marathoner’s shoe and a sprinter’s shoe they’re drastically different. So how can we bring that notion to his line is the key. So when he started talking about transforming our design, marketing and our development teams all got together with some of the new product performance solutions we had and this notion of transform and so what we did was look for other instances of things that transform.

“What we wanted the shoe to literally morph from where it was at the beginning of the season to the end.”

To further illustrate the point, Petrie’s slideshow highlighted the difference between a fully-equipped deluxe sports car and a performance-driven racing machine. Streamlined, re-focused, and efficiency all wrapped up in a still-sexy package. 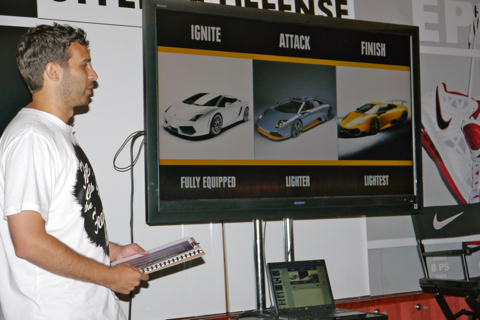 “You get to this attack phase of the car…and it becomes a different expression but the performance is still there,” he explains. “It ain’t about riding around with your buddies, it’s about beating the guy off the line.”

The parallels to LeBron’s new life down here in Miami obviously fit the notion of transformation perfectly with a brand new team, coach, teammates, lifestyle, etc.

“We wanted him to come in fully equipped,” Petrie explained. “That’s the notion of the V1. It’s about support and provide him with everything he needs to protect himself over the course of that long season.”

The V2 had already begun the metamorphosis to a lighter, more breathable shoe but with plenty of flair on it but the postseason inspired Nike to push further. After all those regular season games and the wear and tear associated with the Heat’s big playoff push, Nike wanted to help give LeBron any advantage needed at this time of the season when it’s all on the line.

“The sprint is on where we’re at now, 28 games, and it’s all out. Nothing that you don’t need. It’s not about luxury at this point, it’s really about pinnacle performance and only putting on the shoe what you need and bringing it in at the lightest weight that you possibly can.

“Now we’re at the point where we feel like the transformation is complete. In the end, we’ve taken almost 2.5 ounces out of the shoe, which is a pretty big deal and here’s why: Because at every ounce in a shoe, or in a uniform, that’s extra weight he has to carry around. Somebody like LeBron, an ounce in a shoe is about 55-60 pounds over the course of a mile and he runs about three miles in an average game.

“It sounds a little weird but you think about it, at the end of a game, all of a sudden you have a little extra energy…and your body is going to be a little bit fresher than it would have been because you weren’t carrying around something that was a little heavy, or a little heavier.”

Once Petrie’s presentation ended, he took the time to answer several of our questions and we were then instructed to put on the gear laid out for us and finally crack open those new shoe boxes. Unexpectedly, Nike had actually furnished us with LeBron 8 V2s to hit the court with. And when I say court I mean THE court, not the one located in the practice area. 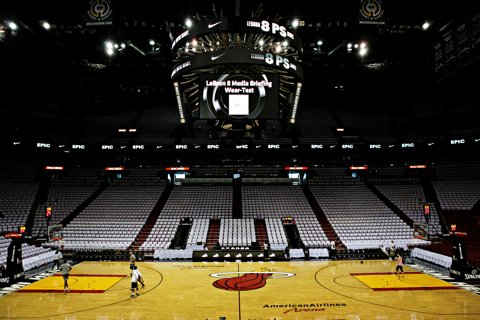 Coming out of the gates like an NBA player, we filed out to the court in awe as preparations were underway to transform the AAA into the White Hot theme as arena workers painstakingly set up each and every seat with white covers. Greeting us was the above-mentioned Nike crew, highlighted by former NBA player Kenny Anderson, ready to put us through some warmups and stretches. From there, we ran a three-man weave (or at least attempted to) and various other drills designed to get our juices flowing.

Seeing as how few of us were in top condition, a short break was welcomed to grab some water and take a seat on the sidelines and rest up before some scrimmages would take place. What awaited us were new boxes on each seat. Finally it was time to test the new PS 8 with Nike’s thinking behind having us trying them out at this point of the event becoming clear. 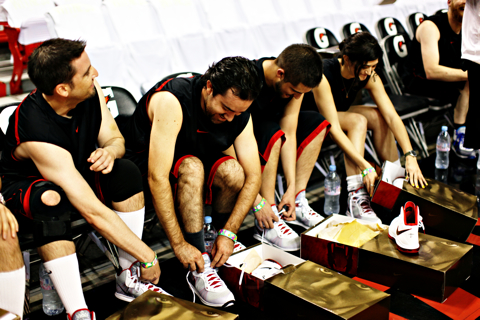 Just by holding the two different models in both hands already made the weight difference clear but actually putting them on and walking back on the court was a revelation. Playing a full-court game with fellow writers and bloggers was definitely a thrill but suffice to say the similarities between LeBron and us begin and end with wearing the same shoe and playing ball on the same floor as he does. Nevertheless, the point was clearly made as to how this shoe performers under similar conditions, just extrapolated over a full season, which is easier to appreciate when we were as gassed as we were by the event’s end.

High fives were offered up by the trainers, group photos were taken and the Heat were nice enough to bring out the Larry O’Brien trophy for more pictures even as none other than Chris Bosh took the floor to hit some shots. We were then finally privy to our backpack’s contents, a fresh change of clothing from the LeBron line complete with sandals. Ah, to live like the King for just one day.

The Nike LeBron 8 P.S. is available now with the Miami Heat home colorway (with a “Dunkman” edition is planned for next month) and retails for $150.