Every morning, we will give you five things from the night before in the NBA to start your day. 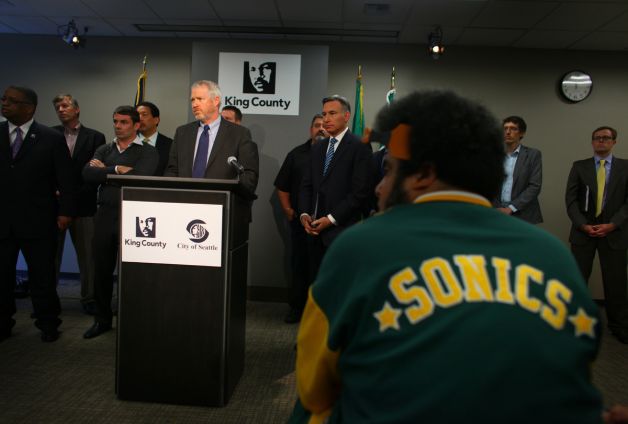 Sometimes, you just need to sit back and watch. The NBA features some of the greatest athletes in the world and all the strategy and Xs and Os go out the window. When you have two all star players like Kevin Durant and Kyrie Irving going head-to-head down the stretch of a close game, you just have to be a fan.

There was Kyrie Irving driving the lane and hitting a floater. Then there was Kevin Durant pulling up for a 3-pointer or driving the lane with his limber 6-foot-10 body quickly passing a defender through the tiniest of holes.

Then there was Kyrie Irving staring down Russell Westbrook waiting for him to give him a crease. And as Westbrook stepped back ever so slightly, Irving raised up and drained a 3-pointer. There was little Westbrook could do except watch in awe like everyone else.

Irving scored 35 points recovering from a 3-for-10 start to lead the Cavaliers to a 115-110 win over the Thunder at Quicken Loans Arena. He received a ton of help from Marreese Speights, who added 21 points off the bench and helped Cleveland keep pace.

Kevin Durant was not quiet either with 32 points and 11 rebounds. Just a normal night for the league's top scorer.

Except his Thunder did not win.

The NBA world held its collective breath as Tim Duncan was on the floor at AT&T Center in the second quarter. Duncan watched as Martell Webster went up for a rebound and crash down on him rolling on his ankle and then the back of his opposite knee.

Duncan was able to walk off under his own power, but it is unclear when he might be back or the extent of his injury. It does not seem to be a worst-case scenario for Duncan, who just returned from sitting out this week with a knee injury. No one could blame the Spurs for taking it slow.

Before Duncan went out, the Spurs were dominating the Wizards in the fashion you would expect a team of their caliber against a team of the Wizards' caliber. The Spurs won 96-86 withstanding the late rally from the Wizards that has become common with this team.

Duncan's was not the only injury. Michael Kidd-Gilchrist left Charlotte's game in Houston with a concussion and was carried off the court on a stretcher after a nasty hit. Kidd-Gilchrist seems like he will be OK and there is no report of any thing long term aside from the concussion.

It appears both players will be all right.

Look out for Parsons

With Tim Duncan out it could have been easy to see the Spurs deflate. And they did to some extent. Tony Parker though can carry a team and the Spurs are good at keeping an even keel. Another efficient performance from Parker gave San Antonio a win on a nervous night.

Oh, you mean Willis Reed Curry. He came back and played the way he’s capable of playing. He really led us in the second half and really got us clicking.

We felt we owed them. But bigger than that, we wanted to do it for our coach and give him the opportunity to coach the All-Stars.