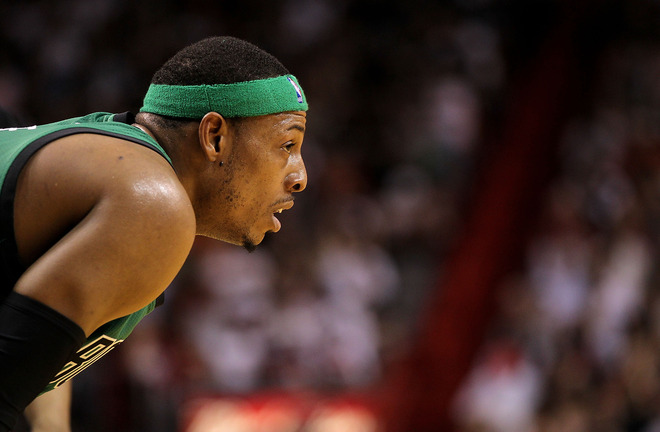 As Miami slowly extended its second half lead over Boston yesterday, heads around Boston slowly started to drop.  With each Celtics turnover and each Heat rebound, Celtics fans grumbled in frustration and berated their team on Twitter and Facebook.  And as the final buzzer sounded, you could almost feel the same thought being thunk by C’s fans around the world:

Is this it for the Celtics?
Fans have certainly been through this before.  Last year the Celtics crawled into the playoffs like a man lost in the desert looking for water.  Their run to the Finals should give fans hope, but Doc is quick to point out that last year’s malaise was actually no such thing.  Last year’s 27-27 debacle of a second half was planned and this year’s is not.

So if this year isn’t a planned step back, then what is it?

Is this a temporary blip, or the beginnings of a seismic shift in the Eastern Conference?  The Boston Celtics are now on year four of what was originally thought of as a three-year window.  When the trades were made for Kevin Garnett and Ray Allen, this year was supposed to be year one of the rebuilding.

Instead, Ray Allen re-upped, Paul Pierce was extended, and Danny Ainge made another run with his three aging amigos and one young superstar-in-the-making point guard.  He tried to fill the surrounding holes with more aging stars that he hoped would lean on their experience to fill very specific, and hopefully non-taxing roles.  He took chances on injury prone players and hoped they’d be able to make it through at least most of the season.

But MacGyver is only successful on TV.  The chicken-wire and bubble gum jerry-rigged roster didn’t hold up.  Shaq got hurt.  Then he got hurt again.  And then again.  And so did Jermaine O’Neal, Delonte West and Marquis Daniels.  And so did Kevin Garnett for a little while and then Perkins again after he came back from being hurt all year.  So minutes for the healthy guys, who also happen to be some of the oldest guys, accumulated because Doc Rivers had few other options.

There are only so many miles left on those legs.  Ray Allen is a physical specimen but even the best maintained car will stop running at some point.  Kevin Garnett can’t last much longer with these deep playoff runs.  Paul Pierce can’t absorb much more punishment.

The Celtics stood on that floor in Miami yesterday in disbelief, and in disarray.  They have yet to figure out how to fully integrate their new players.  Jermaine O’Neal is back but he looked confused at times and he didn’t pull in a single rebound in 14 minutes.  Jeff Green looks confused most times and it’s getting to a point where you wonder how much confidence these guys will continue to have in him.  Nenad Krstic has no idea whether he’s coming or going anymore and, despite his best efforts, is continuing to get lost on defense.

The Celtics have a week to figure things out before the playoffs begin.  If they truly want to hang an 18th banner…  If they are adamant about getting a second ring because “all the great Celtics won at least two”… then they’re going to have to figure it out now.  Because their window is closing fast.  The Celtics have been living on borrowed time, and their margin call is coming.