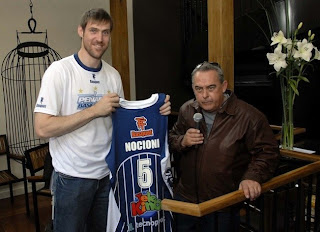 We’re seeing a rise in signings now that the 2011-12 NBA season truly seems to be in danger of being cancelled. Now another NBA player is getting back into competitive basketball with the news that Philadelphia Sixers forward Andres Nocioni has signed back home in Argentina with the club Peñarol de Mar del Plata for an upcoming national tournament called “The Super 8” that will take place from this Wednesday to the end of the week. The question will be whether he will stay on the team to play in the country’s regular league, which the club is praying will happen though Nocioni reportedly has several offers from European teams.

He’s already been practicing with the team for the past couple of weeks and knows their system by now so stepping right into the court with his new teammates.

“This is a dream come true, a historic moment that fills us with pride,” said the director of Peñarol, Alfredo Miño.

Wow, they’re pretty stoked to get Nocioni for half a week of basketball. I’d be stoked if he was lacing them up for the Sixers right now, but that’s not happening anytime soon. Sigh.