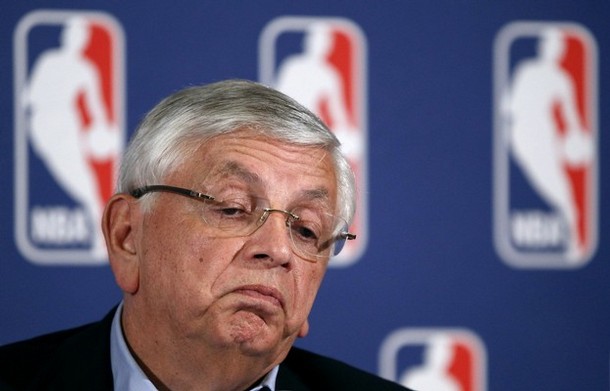 Both sides of the NBA lockout are taking time off before meetings resume again but they are still bickering publicly over how accurate the owners are being with their finances. While no one appears to lose sight that ultimately these are multimillionaires fighting over millions of dollars, the owners are losing the public relations war with their claims that most franchises are losing money and that player salaries are to blame for it. In the face of a successful 2010-11 season that featured rising ticket and merchandise sales along with the return of sky-high TV ratings, the owners and the NBA have become a bit defensive when others question their fuzzy math.

Eager for content during the lockout, the media have been shining a light on the bookkeeping of the league and the reality is that there is more than enough justification to question what the owners are claiming. For instance, Crossover Chronicles writer John Karalis took a look last week at the creative accounting teams use to project operating losses.

Salary cap expert Larry Coon gave an excellent summary of the debate surrounding whether the NBA is really losing money on ESPN.com and why the players want nothing to do with these creative accounting techniques that, while appear to be legal, are a shaky foundation to claim losses that players must absorb.

When applied to the league as a whole, these numbers add up fast. Seven teams were sold since the CBA took effect in 2005. Teams assign different amounts to these intangible assets and the amortization changes on a yearly basis, so we really can’t predict exactly how much is being amortized in a given year. If we assume seven teams deduct an average of $30 million each, then the league would show an operating loss of $210 million per year due to franchise sales alone. In addition, many owners are likely paying many millions of dollars per year in interest related to financing some portion of their team’s purchase. While these are real obligations and represent real cash going out the door, they relate to team ownership, in which the players do not share.

(National Basketball Players Association executive director Billy) Hunter is privy to current documents for all 30 teams and claims that at least $250 million of the league’s $370 million loss comes from these sorts of accounting quirks.

From the owners’ perspective, accounting quirks or not, the league still loses money each season. They insist that the whole financial model of the league is broken, and that much more is required beyond better team management and increased revenue sharing.

The Forbes data suggests that the league is still profitable. Its operating income — revenues less expenses (but before interest payments and taxes) — is estimated to have been $183 million in 2009-10, or about $6 million per team. The N.B.A.’s operating margin (operating income divided by revenues) was about 5 percent in 2009-10 and has been about 7 percent during the life of the current labor deal.

A 5 percent or 7 percent profit is not dissimilar to what other businesses have experienced recently. Fortune 500 companies, for instance, collectively turned a 4.0 percent profit in 2009 and a 6.6 percent profit in 2010 (both figures after taxes). Profit margins in the entertainment industry, in which the N.B.A. should probably be classified, have generally been a bit lower than that.

So why are N.B.A. owners seeking such significant reductions in player salaries, reportedly to about 45 percent of league revenues? The simple reason is that they think they can — and this reflects an awful lot of money. If salaries were reduced to 45 percent of revenues, this would save the owners roughly $500 million per year, or about $3 billion over the course of a six-year labor contract. It is hard to estimate either the near or the long-term cost of cancelling a season, but the potential gain from a more favorable contract is large enough that it is something the owners might be willing to risk.

The NBA then swiftly released their rebuttal as a press release, on their website and even on Facebook.

The information from Forbes that serves as the basis for this article is inaccurate and we do not know how they do their calculations. Forbes does not have the financial data for our teams and the magazine’s estimates do not reflect reality.

Precisely to avoid this issue, the NBA and its teams shared their complete league and team audited financials as well as our state and Federal tax returns with the Players Union. Those financials demonstrate the substantial and indisputable losses the league has incurred over the past several years.

The analysis that was posted this afternoon has several significant factual inaccuracies.

Not content with just denying the report, NBA sources on Wednesday went one step further and also provided their audited financial records to Forbes to prove their point.

Sources close to the NBA labor negotiations have provided Net Income numbers for the league each year over the last five years, plus projected losses for the 2010-11 season. Given that the NBA is saying that they are running at a net loss, as opposed to the NFL, which is saying they are seeing profits declining, the NBA is compelled to open their books as part of labor law, and have done so. The following numbers are audited figures. If the projected figures are correct, the NBA will have lost $1.845 billion over the last 6 years, not turned a profit, as reported by Silver.

The following shows the losses, as well as the number of teams that reportedly have run at a loss the last 5 years, plus projected losses for the 2010-11 season:

Before one begins to say that this all is skewed toward ownership, looking at the Forbes numbers that detail the 2009-10 season show that while some clubs are running in the red, some, such as the Knicks and Bulls are profiting handsomely.

Ideally, the NBA’s records would be as transparent as possible for the media and their fans so the public could have an opportunity to judge for themselves instead of taking their word for it. But remember what Coon wrote and the NBA themselves have said, the players union already has the complete financial documents of all the teams so the fact remains that they have and continue to question the NBA’s numbers even while conceding some ground with regards to lowering player salaries. On Wednesday the players’ union continued to express their doubts Wednesday after the NBA had released their statement.

Union spokesman Dan Wasserman said the NBA projected a decline in revenues that season but they actually rose, so the final losses should have been much less than the league said.

“In 2009-10, the NBA repeatedly offered projections that league revenues would decline as much as 5 percent, or $180 million, while also projecting losses of $370 million. Revenues were actually up in ’09-10 and the revenue projections were off by as much as $200 million. Yet, the loss figures were only adjusted by $30 million. So yes, we feel there is more than adequate basis for questioning their projections and financials,” Wasserman said.

If the players union remains unconvinced of the NBA’s “truthiness” then the lockout drags on as both sides only build distrust instead of harmony.

Can’t we all just get along?