Lakers' Kobe Bryant is already considered one of the most self-motivating player in the game. It doesn't take much for him to find an edge on the court to destroy the competition.

And now that he is on the road to recovery after suffering a season-ending torn left Achilles heel injury, he is gathering up motivation and tracking those who doubt he can return to an NBA court.

Via his Instagram (H/T L.A. Times), Bryant showed just how much he is keeping his eye on doubters and it began with the L.A. Times. Check out what he had to say in the upper right hand corner in the photo below. 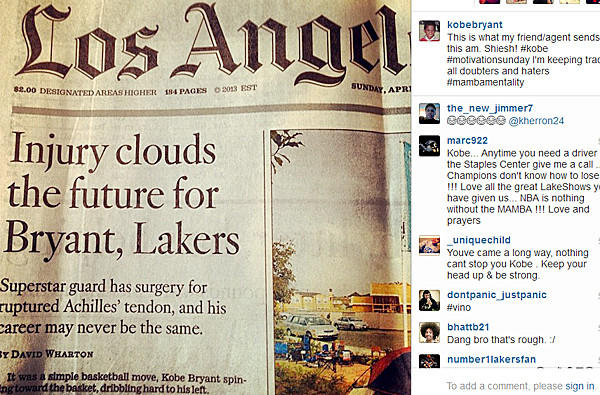 At his age, coming back from an injury like the one he suffered will be arduous. But if any player in the NBA that can come back from such an injury is Kobe.

For now, all he can do is watch his team fight for a playoff spot and continue to gather motivation. Needless to say, it probably won't take much to fire up "Mamba."