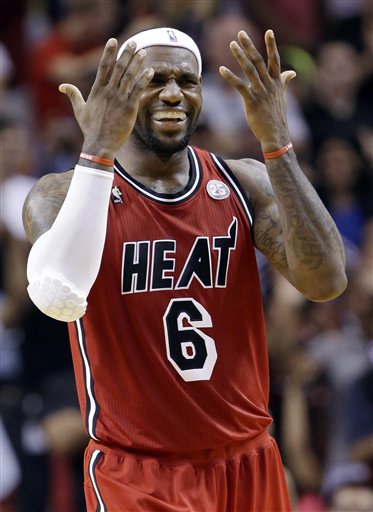 Fans have an unhealthy obsession with the slam dunk. It certainly has a mystique about it since so few people can do it — and even fewer can do the athletic tricks that marvel us on a nightly basis. The Slam Dunk Contest is what made Julius Erving, Michael Jordan and Dominique Wilkins transcendent. It made names out of Spud Webb, Dee Brown and Isaiah Rider.

So when LeBron James said in 2010 that he would enter the next year's dunk contest, seeing his freakish athleticism on that stage seemed too good to be true. Fans could only imagine the trick dunks he worked on in practice and what he would bring to the show.

Alas, James has not entered the contest formally. And the dunk contest this year was an unentertaining mess full of missed dunks and a lack of star power.

So when LeBron James pulls of a pregame warmup dunk like this, it rightly makes fans a little bit angry (h/t Matt Moore of Eye on Basketball):

Off the backboard, between legs, one-handed tomahawk jumping from just inside the free throw line? On one try?! Why aren't you in the dunk contest, LeBron!

Then there is the report (but no video yet) of James turning a Kyrie Irving post-buzzer 75-foot heave into a reverse jam that only adds to James' dunking legend.

There is not much LeBron cannot do at this point. But, LeBron, please enter the Slam Dunk Contest. Just so we can marvel at you a little bit more.