Late Sunday night, Yahoo! Sports' Adrian Wojnarowski broke the news of the trade between the Toronto Raptors and Sacramento Kings that shipped off embattled wingman Rudy Gay, along with role players Aaron Gray and Quincy Acy, to the struggling Kings in exchange for guards Greivis Vasquez and John Salmons in addition to forwards Patrick Patterson and Chuck Hayes.

Gay, who was averaging 19.4 points per game and shooting 39 percent from the field in 18 games with Toronto in the 2013-14 campaign, went to Toronto last January after being dealt from the Memphis Grizzlies, the team that traded for him on draft day in 2006. Pundits, analysts, writers and pundits have ripped Gay constantly this season for his incredibly poor shooting numbers and for the fact that he banned stat sheets from the Raptors' locker room in an odd ploy to get his team to focus on winning games, not their point totals.

It was clear, though, Gay's employment and relationship with the Raptors was going to be shortlived, especially with his albatross of a contract and less-than-stellar statistics in his short time with the team.

Such a trade, like the one Toronto GM Masai Uriji pulled off, was totally necessary for both parties–Gay and the Raptors–because it gave the former UConn star what he needed in order to regain his top form on the court: a new team and setting.

For Gay and supplementary guys such as Gray and Acy, the Raptors were able to get a nice haul, obtaining Vasquez — a serviceable point man — as well as scoring guard Salmons, former lottery pick Patterson, and the scrappy Hayes. Now in one of the NBA's smallest markets, far from the media pressure of the Northeast, Gay will have to ability to work on his game and improve himself as a player without the scrutiny he has faced in his other destinations.

With Gay, and the increased playing time at the point that Isaiah Thomas is likely to get, the Kings have a chance to run a much freer offense that should allow Gay, DeMarcus Cousins, Marcus Thornton, Ben McLemore and the other athletic scorers Sacramento has to get more opportunities to put up a lot of points.

As a poor defensive team without much depth in terms of big men, the Kings have to score often in order to win games. This trade allows them to do that. 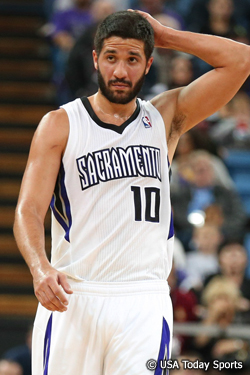 The deal also benefits the Raptors in multiple ways. Getting rid of the offensive black hole that is Rudy Gay will allow DeMar DeRozan, the clear offensive go-to guy for Toronto, to get as many touches as he could possibly want, which for him would likely translate in high scoring numbers. Remember how much more open Memphis' offense became after trading Gay. The Grizlies went to the Western Conference Finals.

An able facilitator such as Vasquez provides Dwane Casey's team with another guy who can run the offense successfully and get scorers their shots. Salmons is another shooter who can put up points off the bench (albeit in high volumes like Gay) while Patterson and Hayes are solid on defense with Patterson serving as a nice post player and Hayes as a smaller forward who hustles from the time he has in the game to when he leaves it.

Normally, trades of this magnitude are unbalanced in some way, giving one of the teams involved a better shake than the other.

On the surface, this one way look like that, especially with how losing Gay's inefficient output may appear to hand the trade win to Toronto. However, the effect a change of situation could have on a player such as Rudy Gay in truly innumerable, and should be enough to even this deal both ways.

It probably will not be enough of a positive jolt to send the Kings and/or Raptors into the playoff hunt, but it is certainly possible, and not all that improbable.