The NBA released its 2014-15 schedule Wednesday getting us officially super excited for the 2015 season.

Is it October yet? No? Dang.

Two months just seems like too long a time to wait. Especially with so many games to look forward to. This season is just going to be way too much fun.

Seriously, is it October now? No?

Until the games start, we will just have to wait for the games we cannot wait for. Don’t forget to listen to our podcast breaking down the schedules and storylines we are looking forward to.

Here are 10 games we are looking forward to most:

Sorry, had to give love to my Magic, because I cannot wait for their season to start or to see Anthony Davis after what is sure to be a strong FIBA World Cup. The Magic and Pelicans will surely be the first game to tip off on the NBA season. We want to see that first game so badly. 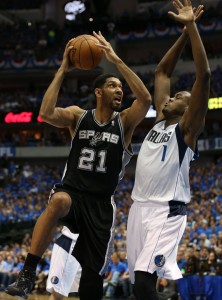 The Spurs get their rings on opening night against a very familiar in-state foe. Photo by Matthew Emmons-USA TODAY Sports

But, for opening night, most people will be watching the Spurs get their championship rings against the team that nearly ousted them in the first round. The Spurs and Mavericks have exchanged some words this offseason as the Texas rivals clearly have no love lost from several Playoff battles the past decade.

The road starts here though. I doubt they will show much emotion over raising yet another banner.

As much venom as there was that December night in 2010 when LeBron James and the Heat came to Quicken Loans Arena, there will surely be that much more adoration and appreciation for James’ first game back at Quicken Loans Arena as a member of the Cavaliers.

This might be the hardest ticket to get of the season in Cleveland. Remember, New York was the team that was supposed steal LeBron away. Instead James is returning against the Knicks as the triumphant hero with the whole world in front of him and his city.

This is going to be some electric television and a pretty good game as the Cavaliers try to figure themselves out.

Trick or treat, am I right?

Derrick Rose makes his home debut against LeBron James and the Cavaliers in this potential Eastern Conference Finals matchup. Many consider the Bulls and Cavs to be the top two teams in the conference. It is hard to argue against that right now.

The question we all want answered though is whether Rose is truly ready for this stage. Is he “back?” This is the question we will answer each game. None bigger than this second game of the season. 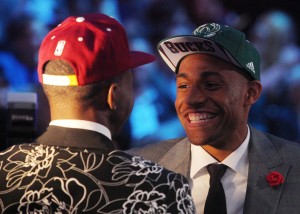 This game will be a pre-Thanksgiving League Pass treat. The top two rookies and the players teams tanked for years to get play each other for the first time in the regular season — the Bucks and Timberwolves play each other twice in the preseason. This will be a fun matchup.

True, Andrew Wiggins and Jabari Parker played each other in college in a high-profile non-conference game. But that was in college. This is the NBA.

There is a lot of expectation and pressure heaped on these two players. It is not going to come immediately. Their meeting in January in Milwaukee might provide a better measure of where they are in their rookie years. But we like seeing firsts. This is the first time these two guys will meet. It should be an exciting appetizer.

This will be the featured game on an epic Christmas Day slate of games. There really is no dud in this bunch of games. It should be a great full day of basketball.

The highlight undoubtedly is LeBron James’ first game back in Miami after he decided to return to Cleveland. How will Heat fans react to having him back? Will they boo? Will they show their appreciation for a player that won the MVP and helped the franchise to two championships and four NBA Finals appearances?

Will Heat fans even show up on time? Will they all be wearing LeBron Cavs jerseys?

This could get awkward. At least the Thunder only have to visit Washington D.C. once every year.

The rumors have already begun racing for Kevin Durant‘s free agency in 2016. We are a full two years out and Wizards fans are circling should the Thunder fail to win a title the next two seasons. They feel they have a team that could get Durant to that promised land.

So when Oklahoma City visits Washington, there could be a lot of doctored Trevor Booker jerseys hoping Durant dons red, white and blue for the Wizards in the very near future. It is going to be a very strange atmosphere indeed. 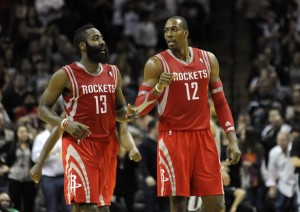 Dwight Howard has not seen Stan Van Gundy on a court in a while. Maybe they will share a Diet Pepsi. Photo by Brendan Maloney-USA TODAY Sports.

The last time Dwight Howard and Stan Van Gundy were in a basketball stadium together, Howard was pushing through a serious back ailment for a 20-20 game. Then Howard disappeared from the Magic never to return. This all happened just a few weeks after Stan Van Gundy’s famous press conference when he admitted Dwight had asked management to fire him and Howard incredulously denied it after Van Gundy left (Diet Pepsi in tow).

Howard and Van Gundy’s relationship is actually much better than you would imagine. Van Gundy has said he still texts with Howard and Howard donated to a political campaign Van Gundy was heading up in Central Florida. There were basketball disagreements for sure, but nothing personal it seemed.

This game though will be the first time Van Gundy and Howard face each other as opponents on a basketball court since the heated departure. Howard has not found anywhere near the success — or adoration — since Van Gundy and him split ways. So that adds some intrigue as Van Gundy re-enters the league.

It will take quite a while for the Rockets to return to the scene of their biggest failure. The Damian Lillard shot that ended the classic first round series (and the 3-0 lead the Blazers quickly took in some heated games) are still ringing in the Rockets’ ears as they try to figure out how to become true title contenders.

The Blazers put a wrench in that plan last year and are on their way to figuring out how to be contenders themselves. This early-March battle will surely have Playoff implications and all those bad feelings from April and May will rise up as the Rockets try to keep their eye on the prize.

Which team comes out on top here could very well determine home court advantage should these two meet as the 4-5 series once again. 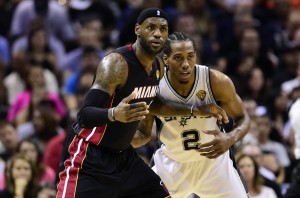 It is not quite a Finals rematch. But LeBron’s trip to San Antonio will certainly feel like one. Photo by Bob Donnan-USA TODAY Sports

This is not quite a championship rematch with LeBron James leaving the Heat and all, but this is probably as close as we are going to get.

The Spurs pretty much embarrassed the Heat in that gentlemen’s sweep in the Finals. They absolutely routed the Heat and made the defending champions look tired and old. Even James succumbed to the pressure as he could not deliver when his team needed it. The cramp game will loom large even with a new maintenance worker at AT&T Center this year.

This will be a marquee game on the schedule. There will be echoes to the 2007 Finals and the Playoff hunt will be in full swing as the Cavaliers visit the Spurs.

This has turned into one of the better rivalries and games in the NBA in the last couple years. Each game has been heated. The teams clearly do not like each other. And they are both really, really good.

After last year’s emotional seven-game playoff series, I would say watch all three games (including the Christmas Day game at Los Angeles). But this one especially catches my eye.

The return to the scene of Game Seven from last year, plus the middle of the Playoff battle where the Clippers and Warriors will likely be angling for a top Playoff seed? That screams must-see TV.