To hear some of the criticism and lack of accolades heading John Wall, makes you think he is not one of the growing young stars in the league. The former top overall pick was recently cut from the guard-heavy U.S. Basketball Team which was not a humongous surprise considering teams can zone and Wall is still an improving jump shooter.

Still, the process irked Wall some.

His public announcement as a member of the roster pool came just days before the team was set to meet in Las Vegas. Wall had been left off the Select Team before and has been an early cut in the past.

This time though felt different after Wall made the All-Star team and led the Wizards out of the first round for the first time since 2005 and seemed to turn a corner. He was hitting jumpers more consistently and becoming better at running a team in the half court. Pluse had had that blinding speed in transition.

Maybe this does not exactly fit the international game. Still it seems odd such a promising young player is being virtually ignored. Again, Wall was not thrilled with the whole Team USA process it seemed (from Ben Standig of CSN Washington):

Asked if he was given a fair shot to make the final 12-player roster, Wall said, “Nah, I don’t think so, but it’s a part of the game. I’m just happy to have the opportunity to be there and represent my country. I wish them the best of luck and hope they can win gold.”

That is a pretty bold statement. True, the team is loaded with point guards with Derrick Rose and Stephen Curry sure to take up two of the spots. Then there is Damian Lillard and Kyrie Irving also competing for time at point guard. Someone who is very, very good was going to get left out.

Wall is just wondering why it was him and why he always seems to get the short end of the draw when it comes to Team USA. 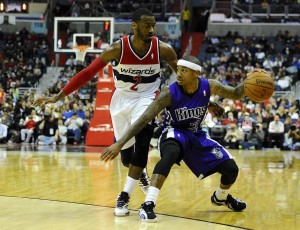 Despite a second-round playoff appearance, an improving jumper and an All-Star selection, John Wall got no respect from Team USA. Photo by Brad Mills-USA TODAY Sports

Wall always seems to get that short stick. National media types like Colin Cowherd (if his opinion can even be considered valid) have reveled in Wall’s struggles to crack Team USA and the elite of the NBA.

His scoring average jumped to 19.3 points per game after a stead progression up from around 16 points per game as a rookie. His assist numbers held steady around eight per game. Yes, Wall still needs to be a better shooter — he shot around 43.3 percent from the floor last year and 35.1 percent from beyond the arc, a career high.

It is hard to be too critical of a player with his skill considering he is just 23 years old (he will be 24 when the season begins).

Wall continues to be sort of outside that elite status. He is no longer the flavor of the month like he was his lone year at Kentucky. That will change though as he continues to get more efficient and continues to improve his game — particularly running a half-court offense.

This year will be a big step forward for him and his career after last year’s breakthrough in the Playoffs. The Wizards will have everyone’s attention as the potential favorite to win the Southeast Division.

At that point, Wall can prove all his doubters wrong.