How old are the San Antonio Spurs?

No, really — how old is this team?

Tim Duncan, 38, continues to produce with the relentless consistency of his 20s, because his career has been nothing but a study in machine-like regularity at a high level of competition.

Kawhi Leonard is only 22, but he often plays with the savvy of a 35-year old. His steal of Russell Westbrook in the open court with 43 seconds left became an instantly iconic play in NBA history, one to be remembered alongside “Havlicek stole the ball!” and “There’s a steal by Bird! Underneath to D.J.!” The play of the game preserved a 108-107 lead and enabled Duncan, the old guy constantly refreshed by the fountain of youth, to score the post-up bucket that gave the Spurs a three-point margin and enabled them to seal the Western Conference Finals on the road.

The story of the 2013-2014 San Antonio Spurs has not yet been written in full, but it can already be said that this team defies the laws of time… and the odds… and everything we’ve come to expect from modern professional sports. What this team achieved on Saturday night gave the Spurs the championship of a cutthroat Western Conference. That the Spurs are preparing not for a Game Seven against Oklahoma City, but for Game One of an NBA Finals rematch against the two-time defending champion Miami Heat, is one of the more remarkable stories authored in the modern NBA.

The story of the 2014 Spurs can’t begin anywhere else than in Miami, in Games 6 and 7 last June.  Kawhi Leonard’s inability to hit two foul shots opened the door for the Heat to tie Game Six on Ray Allen’s unforgettable three. Two nights later, Tim Duncan missed a short shot in the middle of the paint in the final minute of Game Seven, killing his team’s valiant attempt at a bounce-back win. Duncan’s emotions, so often held inside, were exposed moments after that miss as he retreated downcourt to play defense.

The extent to which that Finals loss hurt the Spurs cannot begin to be measured. For a team with two stars on the sunset side of 35 years of age (Duncan and Ginobili), plus a point guard with many miles on his tires (Tony Parker), that long and arduous climb toward a fifth NBA title in the Gregg Popovich era felt like the last one for a good, long while in San Antonio. Oklahoma City, having missed Westbrook in the 2013 playoffs, figured to get the equation right and use its younger legs to outrace the Spurs. The rest of the Western Conference had become so deep and formidable that one more Spurs run seemed unlikely.

Yes, Leonard showed signs of ripening into a star, but the likes of Danny Green and Tiago Splitter didn’t quite come across as cornerstone players able to make up the difference when Duncan and Ginobili inevitably slowed down. The Spurs were almost certain to finally experience a slow but real decline. What happened in Miami nearly 12 months ago was supposed to have been the death of a dream, a dream of an old-man championship for Duncan, one of the NBA’s all-time greats.

Yet, here are the Spurs, again in the arena, preparing to face the Heat in a blockbuster Finals reunion.

How did this happen?

It happened because the Spurs have defied age… and because they were prepared for the situation that faced them on Saturday night in Oklahoma City.

The Western Conference Finals began with Serge Ibaka out, but they concluded with Tony Parker on the bench. The series that, sans Ibaka, looked like a Spurs sweep turned into a 2-2 series with a likely Game 7 finale. Even as the series moved to Game 6 and then to halftime with the Spurs in the hunt, the absence of Parker — San Antonio’s best player — was supposed to mean certain death and a Monday finale back in the Alamo City. No one would have given the Spurs grief for falling short without Parker in a building where they had lost nine straight games to the Thunder.

Again, why are they now flying home to face Miami, and not OKC?

Everything about this bounce-back season gave the Spurs belief… more belief than this and other commentators thought they could turn to their advantage in Game 6.

Throughout the regular season, Popovich gave his old-men starters extended periods of rest to keep them fresh in much the same way the Miami Heat preserved Dwyane Wade’s body for the final two playoff series of the season. Popovich used all sorts of lineup combinations, and the Spurs didn’t suffer as a result. It was easy to think — and yours truly succumbed to just such a temptation — to think that regular-season performance without their core stars was not going to elevate the Spurs past OKC with Ibaka back in the picture, haunting San Antonio in much the same way he did in the 2012 West Finals. Yet, two years later — in a Game 6 with a decidedly different outcome — the Spurs’ depth and teamwork saw them through a supremely difficult test.

Cory Joseph played determined defense at the start of the quarter and set a positive tone without Parker.

Marco Belinelli hit a three and set up another basket with an unselfish pass.

Danny Green buried a tough three from the left wing while providing above-average defense against Kevin Durant, who never found a consistent shooting touch in the fourth quarter.

Boris Diaw scored in the paint and on the perimeter while exploiting Derek Fisher on pick-and-roll action and the switches that followed them.

These role players are not united in age, shape or size. They’re all very distinct basketball creatures, nowhere near close to the same mold. Yet, their efforts kept the Spurs in a position to win, before Ginobili, Duncan and Leonard carried San Antonio to the finish line. For all the ways in which the regular season doesn’t matter — see the Miami Heat crushing the Indiana Pacers despite a lack of home-court advantage — the habits the Spurs cultivated over 82 games were able to rise to the surface in Game 6. Team cohesion developed over many months is what San Antonio called upon against an OKC side whose bench had little to give other than a spirited performance from an undersized Derek Fisher. 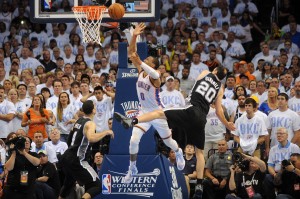 Russell Westbrook was Oklahoma City’s best player in the playoffs, and he was the best player on the floor in the second half. Yet, San Antonio’s ability to win with unlikely lineup combinations in the absence of Tony Parker was somehow able to end the Thunder’s season in a building where they hadn’t lost to the Spurs in nine tries.

The Spurs aren’t a team for the ages, at least not this new incarnation of a different sort of squad, ever since Popovich reinvented the franchise with an offense-first approach a few seasons ago. The Spurs of 2003 through 2007 earned their way into the history books with three championships, but this team needs to beat the Heat in order to be remembered in a similar fashion. Yet, if the Spurs aren’t yet a team for the ages, they are already a team of the ages. Their youngsters have old-man game, and their oldsters have young-man enthusiasm for the sport. The Spurs got one year older in age this year, but they looked younger on the court. The skills that were evident in 2013 look more polished and fluid in 2014.

It’s not how teams with old-man stars are supposed to progress — the 1987 Boston Celtics didn’t have enough juice when 1988 came around, and the 1990 Detroit Pistons ran out of answers in 1991 — but the Spurs have broken the rules. The calendar and the fact of biology say they’re older, but their full roster is so adept at bringing Popovich’s vision to life that the end product is dressed in the clothes of younger men.

Russell Westbrook and Kevin Durant have the endless motors and the capacity to play 44 or more minutes, which they did in Game 6. Leonard, the young buck, was the only Spur who played at least 40 minutes, clocking in at 44. Yet, despite being moved in and out of action in various combinations by a feverishly scrambling Popovich, San Antonio maintained the seamlessless needed to not only beat a personal nemesis, but to do so by chasing away a few demons.

The Spurs won even though Ginobili missed a foul shot late in regulation, recalling the demons that surfaced in Miami in Game 6.

The Spurs won by having Duncan score against Ibaka, the defensive menace who stood in San Antonio’s way in the 2012 West Finals.

The Spurs won by having Green play with a resilience not shown in the Spurs’ collapse against the Thunder two years ago.

The Spurs won even though Westbrook — a central tormentor in 2012 — was the best player on the floor for either team in the second half and the first few minutes of overtime.

The Spurs won north of the Texas-Oklahoma border… all without the French floor general who had seemed so central — and necessary — to a set of title aspirations that felt more remote in November than they did in the final seconds of Game 6 against the Heat.

The Spurs know that their journey is not finished, and that a loss to Miami would haunt them even more than it did a year ago.

Yet, when you chase away ghosts and the laws of sports physics as San Antonio has done, the two-time defending champions don’t look like as much of an obstacle in the coming weeks.