Why were the Lakers so bad? First off, superstar Kobe Bryant only was able to play six games all year because of a debilitating knee injury. Point guard Steve Nash was limited to only 15 games due to chronic back problems.

That left Pau Gasol (60 games played, 17.9 points and 9.7 rebounds per contest) as the Lakers star to be injured the least, which certainly demonstrated just how hamstrung L.A., and now former coach Mike D’Antoni was with his team.

On Wednesday, news broke that D’Antoni — whom Los Angeles hired at the beginning of the 2013 season — resigned from his position with the team after not receiving the extension he was wishing for, allowing the Lakers to look for a new start with their coaching staff after two consecutive weird, eventful, and unsuccessful seasons. 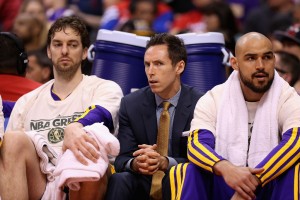 The reunion of D’Antoni with Nash, his old point guard in Phoenix with the Suns, did not turn out as well as the team would have hoped, and injuries and the strange one-year Dwight Howard Lakers stint probably had a lot to do with that.

Being the Lakers and all, general manager Mitch Kupchak is looking to go big with his next coaching hire, and reportedly is considering a pair of college coaches for the vacancy — UConn’s (2014 NCAA champion) Kevin Ollie, former NBAer and L.A. native, and Kentucky’s John Calipari. Both coaches faced off against each other in April’s National Championship Game, with Ollie’s Huskies trumping Calipari’s Wildcats.

Ollie played in the NBA from 1997-2010 for 12 different NBA teams and was hired as the head coach of his alma mater, replacing the retired Jim Calhoun. UConn went just 20-10 in the 2012-13 season, missing the NCAA Tournament because of NCAA violations, making their improbable run to the title this year as a No. 7 seed that much more impressive.

The former point guard may not have NBA head coaching experience, but Calipari, who has seen many NBA teams attempt to coax him out of the college ranks, coached the then New Jersey Nets for three seasons in the 1990’s, going just 72-112, before becoming an assistant with the Philadelphia 76ers and moving on to Memphis back in the NCAA.

Calipari has already denied his interest in the Lakers job . . . but that is just for today.

Before it starts, I'm totally committed to helping this group of young men reach their dreams. I wouldn't & couldn't leave this group!

With just Ollie and Calipari, Kupchak has a pair of pretty good candidates. But according to Marc Stein and Ramona Shelburne of ESPN, Los Angeles may also look at Bulls coach Tom Thibodeau and even current Thunder guard Derek Fisher — long rumored to be a good coaching prospect — as other possibilities.

Obviously, right now is too early to tell anything but it is clear the Lakers are trying to make a big move with their coaching hire and they have the candidates to do so.