Portland's season was quickly going off the rails long before LaMarcus Aldridge came crashing on the floor in the second half. Aldridge made the basket but fell hard on his lower back, an injury that will keep him out at least the next two games and maybe longer.

The game was almost out of reach at that point anyway. Which says a bit more about the Trail Blazers free fall from getting home-court advantage to fighting for their Playoff lives.

At the beginning of the seaosn, the Blazers raced out of the gates to a 31-9 record. Damian Lillard and LaMarcus Aldridge were legitimate all stars and played the part. This was one of the true feel-good stories of the NBA with Terry Stotts getting the most out of his team.

Portland is hardly young too. There was an urgency to make this a Playoff year with Aldridge having the ability to enter free agency. There are plenty of players on the roster — from Nicolas Batum to Wesley Matthews to Mo Williams — who have cut their teeth in the league and wanted to ride the elevator up with Lillard and Aldridge to some form of success.

The Blazers are now 42-23, fifth in the Western Conference and 5.5 games clear of falling out of the Playoffs. That sounds like enough of a cushion, even for a team that has now lost 14 of its last 25 games in a Western Conference that is increasingly passing them by. 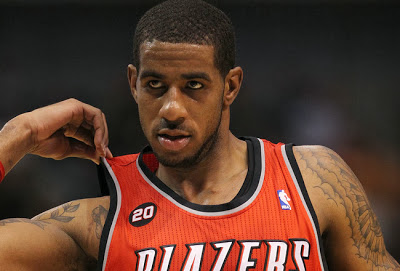 A four-game losing streak like the one Portland is on now can certainly lead a team to do a bit of a freefall. And it certainly does not engender confidence that they can get out of the first round.

No one is claiming though that the Blazers have gone so far back as to throw Aldridge's future back in doubt. At the beginning of the season, Aldridge seemed to be a prime trade candidate with his contract set to run out in 2015. He seemed poised to be the next player to make his exit (along with Kevin Love).

Winning changed that. And this is a team that should continue to get better as Lillard gets better.

Portland still seems ahead of schedule. But expectations change with early success. And the Trail Blazers are not living up to those early expectations.

Instead, they are falling a bit and falling behind. This once great story is turning back into mediocrity in the middle of the West.