Any time you throw the word “rape” around it is loaded and usually uncalled for. Bob Knight should know this better than anyone. Yet, he did it again.

In no way should Knight have used the term in this context. All flak he receives for the comparison of a professional sports league taking the best players from the collegiate or amateur level at any point is deserved. So here is the quote from the cantankerous former coach to Chris Littman of the Sporting News (h/t Tim Polzer of Sports Illustrated):

“If I were involved with the NBA I wouldn’t want a 19-year-old or a 20-year-old kid, to bring into all the travel and all the problems that exist in the NBA. I would want a much more mature kid. I would want a kid that maybe I’ve been watching on another team and now he’s 21, 22 years old instead of 18 or 19, and I might trade for that kid. On top of it all, the NBA does a tremendous, gigantic disservice to college basketball. It’s as though they’ve raped college basketball in my opinion.”

Obviously that is a poor comparison. And a really poor choice of words.

What we want to do is get to the crux of Knight’s argument. And he certainly raises several of the concerns that have put the age limit at the forefront of Adam Silver’s agenda.

The NBA is not doing anything to college basketball. The NBA loves having college basketball around — it is free marketing for their future stars and provides a free minor league system for top prospects to showcase themselves for scouts and fans. In any case, the NBA has really no responsibility to the NCAA and college basketball except to ensure the growth and development of the sport.

The league is pushing to increase the age limit to 20 years old or two years out of high school. The one-and-done rule has been a good thing compared to some of the disastrous picks that occurred when players could jump to the league straight out of high school. At that point there were clearly not players ready to play coming to the NBA and making tons of money. The league though is addressing some of the issues Knight brings up as a problem.

The one-and-done system has become a joke for much more nefarious reasons. Players are skating by school just enough to remain eligible and then checking out at the end of basketball season to prepare for the NBA Draft. They are making a mocker of the NCAA’s student-athlete model. They are not students. They are unpaid athletes.

The NBA is only providing them a landing spot for their athletic desires. There is virtually no reason these players who are physically capable of playing in the NBA from doing so. 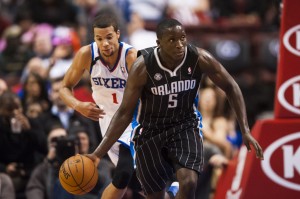 Some players certainly need the time to develop — Victor Oladipo did, for instance. Others do not — LeBron James scored 25 points and dished out nine assists in his first game.

Maturity wise, certainly some players need the time with more direct supervision to grow up some. A year or two under Mike Krzyzewski’s watchful eye can help out of control players grow up. There is no guarantee they get that presence. And the NBA becomes a free for all anyway.

The issue with Knight’s proposition is not that the NBA is the problem. The problem is the recruiting culture and AAU culture that has told many of these players that they are ready to play in the NBA when they are not. More honest assessments of a player’s capability to play at the collegiate and NBA level will go a long way to solving this problem. An age limit from the NBA in the next collective bargaining agreement will certainly fix some of these problems.

It could also cause the whole college system to become even more of a joke — at least compared to the ideals the NCAA ascribes to.

In the end, no one is going to stop players from declaring for the Draft when they think they are ready. Many will do so at the earliest point they can. Making them wait a year and stay out of the NBA system might be more of a waste than anything else.