LeBron James‘ decision about where to sign his contract for free agency was about making something right that was wrong. It was also about winning. He looked at the landscape of the Miami Heat and the health of Dwyane Wade and was not convinced he had a chance to win.

Yes, winning in Cleveland was going to be a challenge. The Cavaliers are young, inexperienced squad with more potential than anything else. James is hoping to lead this squad to the promised land of a championship.

With James’ domino falling, other free agents have been spreading out throughout the league and making their decisions. The next best player on the market is Knicks forward Carmelo Anthony. He had an equally intriguing decision to make that would shape the rest of his career.

On one hand were the New York Knicks. They offered the comforts of home — and the extra year and raises that home can offer. There is also the comfort of role — a ball-dominating one where Anthony is relied on as the only scorer.

Of course, entering free agency this year, Anthony saw himself miss the Playoffs for the first time in his career and a team with little future and fewer assets. New York collected a few in trading away defensive linchpin Tyson Chandler this summer, but nothing to persuade Anthony to stay. 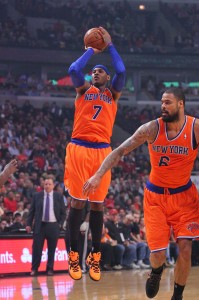 Carmelo Anthony will get his money in New York. But will he win? Photo by Dennis Wierzbicki-USA TODAY Sports

That is where the Chicago Bulls came in. The Bulls offered Anthony the chance to play for a winning team. There was a team that has willed its way into the Playoffs without its superstar Derrick Rose, who is supposedly healthy now and ready to return to his MVP form. Rose would be a great complement for Anthony as a distributor and creator, taking offensive pressure off of a great scorer like Anthony.

Many saw the Bulls as the favorite in the Eastern Conference if they could grab Anthony.

They could not however. Anthony signed a reported 5-year, $122 million contract with the Knicks. According to Ian Begley of ESPN New York, the contract could be worth more but is not for the full max that Anthony could have received.

This was not a complete money grab. Anthony has proven himself to be a max player in this league. The Bulls were offering a better chance at immediate victory.

So much like how the narrative about James being torn about leaving Cleveland and eventually returning, Anthony’s decision fits his narrative. Here was a player who obsesses with being great and a great scorer but is either unable or unwilling to share the spotlight and do what is necessary to win. Anthony has never made the sacrifice to his own game and numbers to become a true winner in the NBA.

His presence in Chicago to help that organization get over the hump and provide the offensive punch the team so desperately needs (even with Rose out) to be true contenders in the East.

Anthony, in essence, passed up the opportunity to be part of an immediate contender to stay in New York where he could be “the man” whether or not the team wins. And it feels fairly certain the Knicks are not quite ready to win in 2015.

New York could actually be in worse shape than the team was last year when it unexpectedly missed the Playoffs just a year after finishing with the second best record in the conference. Gone is Tyson Chandler and in comes Jose Calderon. That does not exactly bode well for the defense.

What the Knicks do have working for them is tons of cap space however.

With Anthony slated to make somewhere near $20 million next season, New York only has $27.7 million committed to next season’s team. That would give the Knicks enough cap room potentially to go after a big-name player with some room to spare (if they renounce all their free agents, inclusive of options the Knicks payroll bloats to $22.1 million which is still very manageable to get a star).

Phil Jackson showed some decent acumen in clearing this cap space. And while the Knicks and Jackson seemed ambivalent toward Anthony’s return, Jackson positioned his team to be players and provide those supporting pieces to help and support Anthony. Anthony was by no means a centerpiece, it appears, for Jackson. 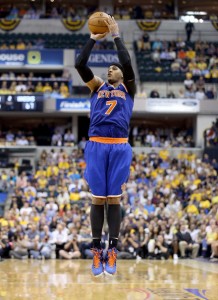 That could rub Anthony the wrong way. There were already reports of Anthony being willing to see where the Knicks go and then try to force his way to where he wants to be. It seems both sides are trying to feel each other out still.

That is not the greatest way to start a five-year relationship. And it is not necessarily the best way to guarantee wins.

If winning was Anthony’s number one priority the near-certainty of Chicago would seem to be a better fit than the mystery of New York. Remember, the Knicks have a first-time general manager and a first-time coach in Derek Fisher. That is not the strongest footing for a winning team.

Anthony though has made his decision. He has made his money. He will get his stats. We will have to see if he is happy with that.