The New York Knicks are not likely to compete for an NBA title any time soon unless their superstar forward, Carmelo Anthony, can carry the team to the Finals. With limited cap space this past summer, the Knicks were unable to make any wholesale changes to the squad, instead tinkering with some parts and trying to add key pieces wherever they could.

Nonetheless, Knicks fans have to be pretty optimistic about a bright future that contains their superstar scorer Anthony on the floor and with maestro Phil Jackson pulling the strings behind the scenes, there’s no telling what will happen.

Even though the Knicks are mostly biding their time until they can shed some dead weight in contracts and attract some bigger names in free agency next year, they still should contend for a playoff spot during the 2014-15 season. And maybe, just maybe, they can shock some people.

That kind of optimism has even the most expensive Knicks tickets returning value this year, as Melo and co. will come to work hard against the stiffest of competition. To get a good idea of what Knicks fans can expect in those games, let’s quickly break down New York’s top five most expensive games for this season: 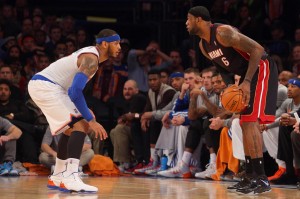 You will have to pay a pretty penny to see LeBron James match up with Carmelo Anthony this year. Photo by Brad Penner-USA TODAY Sports

LeBron James vs. Melo is a classic battle and Cleveland home games are pretty pricey this year, so this is no surprise. Add Kevin Love to the mix and this October battle is both formidable and epic. At an average price of $1,294.52, Knicks vs. Cavs tickets are the most expensive NBA tickets in 2014-15.

Talk about a discount. Yes, King James and co. coming to Madison Square Garden is still expensive, but it is more than half the price of the same matchup in Cleveland. Hometown Knicks fans get a solid deal and also get the home court advantage. Add in the fact that NYC parking at parkwhiz.com starts at just $12 for spots near the Garden, and you have quite a bargain.

It gets even better once 2015 hits, as the Cavs and Knicks square off again. All the star power and Knicks tickets can be purchased for MSG. Spike Lee will surely be in attendance for one of the top showdowns on New York’s schedule.

Finally, not the Cavs, right? A rising Wizards team boasts the veteran Paul Pierce at the three spot, and he will try to give Melo a hard time in this instant classic for Christmas Day.

Derrick Rose might do all of these other matchups one better, as a hopefully healthy Bulls team serves as a nice early season measuring stick in New York.