For what felt like years, Kevin Love — drafted with the fifth overall pick in the 2008 draft by the Timberwolves — made it clear that he wanted to finish his career outside of the Twin Cities. A California native, who grew up in Oregon but matriculated to play at UCLA, it was always the prevailing notion around the league that Love’s time in Minnesota was numbered, regardless of how much personal success he experienced while there.

Well, this offseason, his long-rumored departure came in the form of a trade to the Cleveland Cavaliers, now re-equipped with LeBron James.

In exchange for their power forward, Minnesota received Andrew Wiggins and Anthony Bennett (the last two first overall picks) from the Cavs. In a consequent deal, which netted Thaddeus Young and a trade exception for the Wolves, Luc Richard Mbah a Moute, Alexey Shved, and a 2015 first round pick were surrendered.

When taking into account the fact that Kevin Love clearly was not going to remain a member of the T-Wolves past this upcoming season, that Minnesota got a possible franchise player in Wiggins and complementary pieces in Young and Bennett — both of whom are young enough to have notable potential — it appears as if they did just as well as they were going to do.

On the surface, losing Love is going to invariably hurt the team for years to come. However, the Timberwolves knew they were not going to keep him for the long term, so why not get as much value as possible for him now before he left in free agency for nothing?

That is the mentality most teams have regarding departing star players, but many — as in the case of Cleveland when LeBron left for the Heat — let them leave without receiving anything in return. 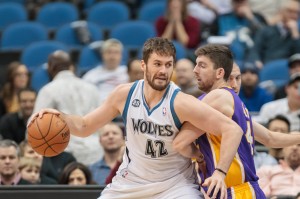 As much as fans, possibly teammates, and even Minnesota’s owner may be bitter about losing Love, trading him this summer was the right thing to do for both him and the team.

Love spent his first six seasons with the Wolves, and was amazing during those seasons, averaging 19.2 points and 12.2 rebounds while making three All-Star games. He may never have made the playoffs with the team — which is due more to his lack of teammate support than his own play — but also gave it his all for Minnesota, even when it was obvious he wanted to play elsewhere. You can’t really ask much more of a player.

For the Timberwolves, waiting anymore to deal him would be unnecessarily risky.

In-season NBA trades rarely guarantee equal trade value for stars and there’s always the chance that possible trade partners would simply wait for free agencas my to scoop up Love instead of giving up players, picks, and financial considerations.

It looks like the way the Kevin Love era ended in Minnesota was about as amicable and beneficial as possible for both parties. Minnesota’s rebuilding process got accelerated with the addition of Wiggins, Bennett, and Young while Love is on pace to make his first postseason ever as a member of the Cavs’ super team. That’s about the optimal situation for everyone involved.