There have been a number of innocuous trades and roster moves as training camps get set to start. Nothing major. No James Harden trade to wake us up before the season starts or clue us into any master plans. Just minor things.

Like whenKeith Bogans was shipped from Boston to Cleveland for the non-guaranteed contracts of Erik Murphy, John Lucas, Malcolm Thomas and Dwight Powell. Bogans is owed approximately $10.8 million in the next two years. It was a strange move for the Cavaliers to take on that extra money with how LeBron James structured his contract and the incoming extension for Kyrie Irving and Kevin Love quickly on the horizon.

Bogans in all likelihood was not going to play. He played in just six games last year for the Celtics and he is largely just another large, semi-expiring contract that will get passed around a few times.

In fact, he already has been passed off to the Sixers — where he is the team’s second-highest paid player. The Cavaliers got just a second-round pick in return. 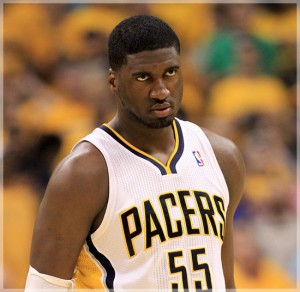 So, if you are doing the math at home, the Cavaliers have just $16.3 million committed to next year’s team. most of that belongs to Irving’s extension. James and Love would take up another $37 million — so the Cavaliers could have $53 million designated for those three players. They do not have Bird rights for James so they have to keep enough cap room to re-sign him outright if he were to opt out of his one year deal.

But with the salary cap projected to bump up again with the anticipation of the new TV deal, the Cavaliers could be sitting on a heaping pile of cap space. Maybe not enough to sign a player outright, but perhaps to acquire another big player in a trade. Especially since the Bogans trade gave the Cavaliers a more than $5 million trade exception to use until next September.

And the rumors have already started with one Cleveland reporter saying the Cavaliers placed a phone call for Roy Hibbert (something the Pacers denied).

That kills that dream — for what it’s worth, Hibbert would give the Cavaliers the rim-protecting center they need to complete their defense. But it does not sidestep the point.

The Cavaliers are cooking something interesting and have a lot of options to explore and build with James now in tow and Irving and Love along for the ride.

Dion Waiters is an interesting trade chip to dangle out there as well along with all those expiring contracts and trade exception too. David Griffin has done a good job positioning the Cavaliers to get better.

And they are already the favorite in the Eastern Conference.