The NBA Finals is predictably tied at 1-1 after two games. How we got there is somewhat surprising with LeBron James cramping at the end of Game One and then looking superhuman in Game Two as the Heat won a close game. This series could very easily be 2-0 either way, which sets up an exciting pair of games coming up in Miami later this week.

Philip Rossman-Reich: What did we learn about this series through two games as the series shifts to Miami? Did the Spurs need to win Game Two and miss an opportunity to take clear hold of this series or can they survive on the road in Miami?

Matt Zemek: I went into this series thinking that the Spurs, so utterly comfortable at home in the playoffs save for the first two games of the Dallas series, would do what no one else has done against the Big Three-Era Heat: Take a 2-0 series lead.

It is clear that taking a 2-0 series lead against the LeBron-Wade-Bosh Heat, if achieved, represents a substantial accomplishment, if only for the fact that it would be unprecedented. The Spurs could have set the stage for a short series by going up 2-0.

Now, it seems we are going seven again. 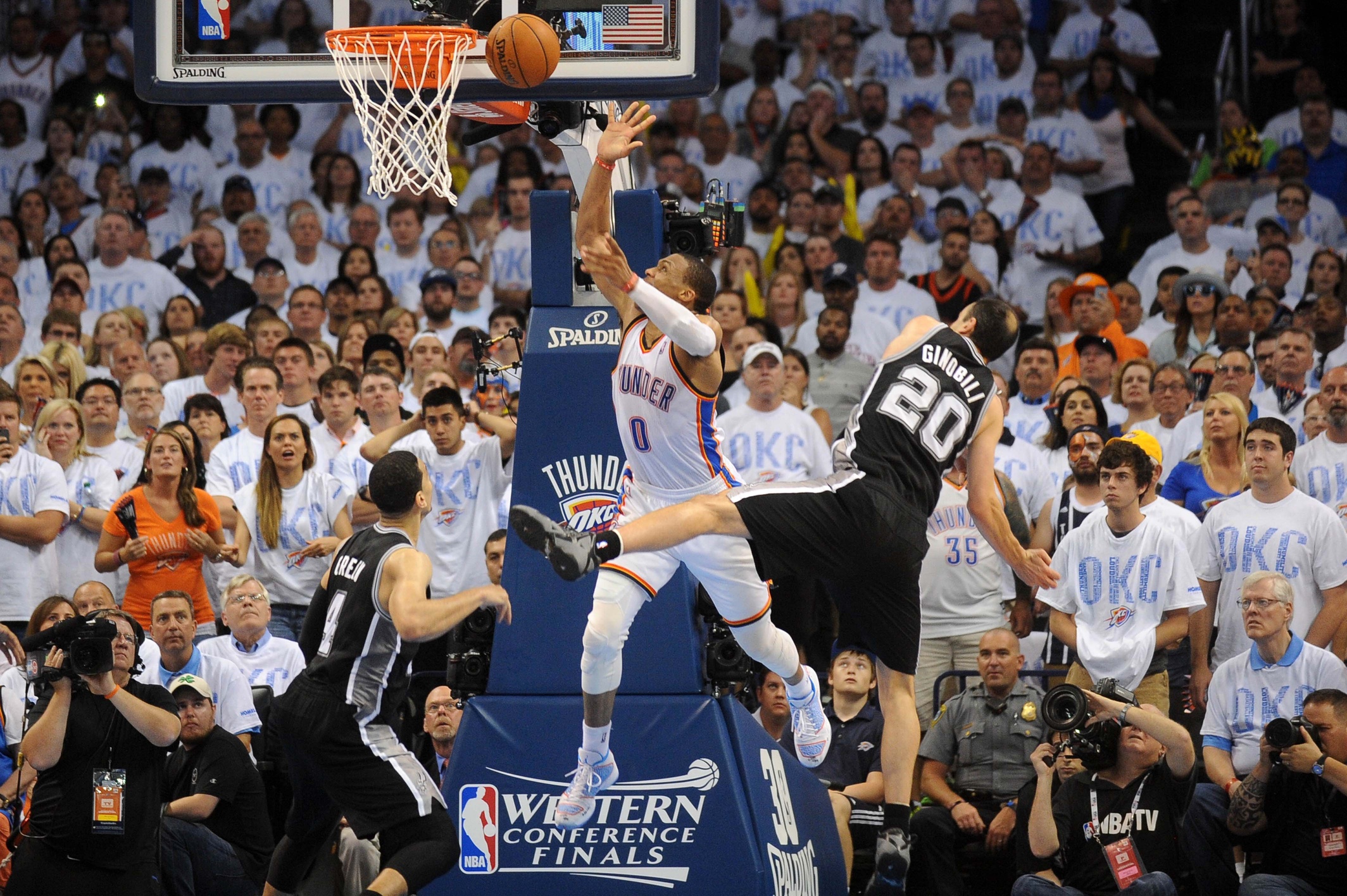 Russell Westbrook was Oklahoma City’s best player for the balance of the playoffs, and he was the best player on the floor for most of the second half. Yet, San Antonio’s ability to win with various unlikely lineup combinations in the absence of Tony Parker was somehow able to end the Thunder’s season in a building where they hadn’t lost to the Spurs in nine tries.

Let us apply some clarity and nuance to this situation: The Spurs simultaneously blew a big opportunity on Sunday, yet did not put themselves in huge trouble. Oklahoma City is the road locale where they really struggle. It is only if they fall behind 3-1 that they will truly rue Game 2.

The Spurs would have liked to have been up 2-0, but if you give them a Game Seven scenario right now, they would take it. Getting to a Game Seven at home is, after all, what the Utah Jazz failed to do against the Chicago Bulls in the 1998 Finals, the last time a rematch occurred at this stage of the postseason. Michael Jordan never had to deal with a Game Seven in the Finals. He was always able to get the job done in no more than six. The Spurs will just have to strap in and make sure that when they fly out of Miami on Friday morning after Game Four, they will be in a 2-2 series. If they attain that goal, they will probably get the Game Seven on their turf.

Josh Burton: Through two games, I think we have learned just how important the three-point shot is for both teams. Rashard Lewis and LeBron both hit three triples apiece as Miami went 8 for 19 from deep while the Spurs went 12 for 26.

Both teams hit their long balls in Game Two but the Heat made more important ones, as Chris Bosh made a hugely important one late in the fourth quarter while Lewis and LeBron made critical ones throughout the game to both keep the Heat within striking range of the Spurs early on and help the Heat build a larger lead later.

San Antonio’s three-point shooting was pretty good overall, but the Spurs could not buy a triple as the fourth quarter wound down, which is when they needed one the most. Normally reliable Manu Ginobili was just 2 for 7 from downtown and regularly clutch sharpshooter Danny Green disappeared. His impact was severely diluted last night, as he played just 18 minutes and only took five shots overall.

A few more made open threes here and there by either team would have totally changed the way this game played out. If James Jones was able to make either one of his two great 3-point looks or if Ray Allen played as well as he normally does, Miami may have ran away with this game instead of it coming down to the wire. Meanwhile, if Manu were able to get into a rhythm for San Antonio, the Spurs might be up 2-0 already in this Finals.

The Spurs defended James well throughout the night, but may have missed their chance to dethrone the King. Photo by USA TODAY Sports

However, neither of those situations came true and the Heat were able to win. The Spurs blew their only true chance, in this series, to take near-complete control and have the Heat up against a wall, fighting for their playoff lives in Game Three. Now, Miami has the home court advantage that San Antonio gave up in addition to having almost all the momentum after a huge Game Two victory.

I think the Spurs will still able to take at least one of the next two games in Miami, but there is a chance they do not. If not, they will be down 3-1 heading into Game Five in San Antonio, which would be a nightmare for them.

Philip: Any time you are in a Finals series, every game is obviously pretty important. As we learned last year, the championship can be determined on one or two plays. There is really no way not to feel that losing a close game in the Finals is “giving one up.” Will San Antonio regret their collapse in Game Two? At this point, we cannot say the Spurs would any more than the Heat feel bad for collapsing in Game One. Both teams had their share of bumps. Both teams took care of one game.

What surprised me most in the first two games is really two sides of the same coin.

First, the ease with which Tony Parker and Manu Ginobili were finding their way into the paint and creating for others. There are long stretches in both games where the Spurs just imposed their will and played their system to perfection. Then there were also stretches where the ball got stuck, Ginobili went hero ball and San Antonio turned the ball over way too much. You cannot do that against the Heat.

So what surprised me most was how imprecise San Antonio was executing its offense for good chunks of each game. To be sure, the Heat will take advantage of each of those stretches as Gregg Popovich readily admitted after Game Two that the Spurs are not good enough to defeat the Heat with one player trying to do everything himself. There are going to be stretches where that is going to happen and the Spurs just have to survive.

Survival becomes tougher on the road. Miami should feel pretty comfortable as this series moves on.