We are mere hours away from the NBA Draft taking place and a lot of key questions getting answered.

Last week, I presented my first run through the first 30 picks. A lot can change in a week. Dario Saric reportedly signed a two-year deal with Anadalou Efes in Turkey. People still do not know what Joel Embiid’s health outlook looks like. The Magic traded Arron Afflalo for Evan Fournier and a second round pick. Omer Asik was shipped from Houston to New Orleans.

And, oh yeah, a major free agent shift could be coming with Carmelo Anthony and LeBron James opting out of their contracts. That is where we stand as the Cavaliers head to the draft board — considering several offers for the top pick.

With that in mind, let’s get a quick look at how the Draft might shake down tonight:

1. Cleveland — Jabari Parker (Duke): The Cavaliers are reportedly still debating what to do between Parker and Wiggins and have entertained trading the pick. Parker reportedly “tanked” his workout. That is never a good look. The Cavaliers need to win now and Parker is the most ready to contribute of the top guys. Pairing him in the front court with the versatile Tristan Thompson will give the Cavaliers an athletic front line.

2. Milwaukee — Andrew Wiggins (Kansas): Wiggins is probably the player with the most talent in this draft and the most potential to become something really special. Even if Milwaukee has a need at point guard and really likes Dante Exum, the team cannot pass on a talent like Wiggins. He still has to put his game completely together and learn to take over a team, but he has the talent to do it and will only get better. Look for Philadelphia to push to get into the top two to take Wiggins through the Draft.

3. Philadelphia — Noah Vonleh (Indiana): I am personally higher on Kentucky’s Julius Randle. I think he is a more complete player and Vonleh needs a lot of work. He is raw with a ton of physical attributes. If there is a team that can afford to be a little patient, it is Philadelphia. And that front line with Vonleh and Nerlens Noel seems like a twin towers lineup that would give players athletic nightmares in the future. Besides, Vonleh said he thinks he can play the three, showing his athleticism and confidence in the skills he does have.

4. Orlando — Dante Exum (Australia Institute of Sport): The Sixers or Bucks could very easily take Exum and leave Orlando drafting the raw Vonleh or Randle. Exum is a unique talent, possessing a lot of speed and size for a point guard. The Penny Hardaway comparisons are a little much, but it is hard to argue when you watch the way he plays. He and the Magic would be a perfect fit as his skills and defensive potential complement Victor Oladipo well.

5. Utah — Julius Randle (Kentucky): Of all the post players, Randle is probably the most complete and ready to play. I really believe you could drop him on an NBA court tomorrow and he would playe well. He has decent size and a great offensive touch. He just needs to increase his strength and defense in the paint. Randle’s big issue is a perceived low ceiling. The comparison to Zach Randolph is a good one, but that probably does not mean he can be your franchise player. Still a very good pick.

6. Boston — Joel Embiid (Kansas): Boston seems like a team that could take the risk on Embiid after his stress fracture last week. They are still deciding whether to rebuild or retool and are collecting assets to make a run at Kevin Love. If that pursuit holds over into the season and Embiid shows he can play, that is another asset . . . and another reason for Love to stay. The truth is, if Embiid can be healthy, he could very well be the top player from this Draft. He has great basketball sense for someone who has not played the sport long.

7. L.A. Lakers —Aaron Gordon (Arizona): With the Lakers likely moving on from Pau Gasol, they will need some girth and inside presence to make up for that loss and get back into at least Playoff contention. Gordon is still growing as an offensive player, but has a knack for finishing around and getting to the rim. You could easily see him cutting to the basket and finishing dunks . . . if Kobe Bryant will pass him the ball.

8. Sacramento — Marcus Smart (Oklahoma State): It is starting to sound like the Kings will lose starting point guard Isaiah Thomas in free agency. So why not trade away the diminutive point guard for this bull-headed, strong lead guard? Smart has some issues with his jumper that he will have to continue to work on and he and DeMarcus Cousins might have some attitude issues. But there is no denying the talent.

Michigan’s Nik Stauskas shot 44 percent from 3-point range in his two seasons of college basketball, but shooting is not all he will bring to an NBA team. Photo by Nick Conroy/AP

9. Charlotte — Nik Stauskas (Michigan): Stauskas is probably the best shooter in this draft and he has had several NBA teams on his tail. He is not just a shooter though. He really has sneaky athleticism that make him more of a rounded player. The Hornets need shooting either way to build off their playoff success. It makes sense for them to go after Stauskas here.

10. Philadelphia — Gary Harris (Michigan State): Harris is a really interesting combo guard with some passing ability, but a better ability at getting to the basket and scoring. He is fast and a solid defender — typical of a Tom Izzo recruit. If the Sixers are toying with pairing Exum and Michael Carter-Williams together, Harris is a more natural fit at shooting guard and will not take the ball out of Carter-Williams’ hands too much.

11. Denver — Doug McDermott (Creighton): McDermott had the ball in his hands a lot at Creighton and put up a lot of points. The question for him is how does he go when he is not the main guy on his team. He certainly does not have the talent or size to do that consistently in the NBA. But he will still find his way into the league because he is such a good shooter and understands how to get the space for his own shot.

12. Orlando — Adreian Payne (Michigan State): With today’s trade to acquire Evan Fournier, it feels like the Magic have found a decent shooter to add to the lineup. I have had this slot pegged for Rodney Hood or James Young for a while now. But I shift it now to Adreian Payne. Payne could develop into a solid stretch-4. For now, he is a determined, if undersized, defender and a solid player around the basket.

13. Minnesota — James Young (Kentucky): Young was the shooter for that Kentucky team until Andrew Harrison went bonkers in the NCAA Tournament. Young is a guy who will hit an open shot when he gets one. That was something the Wildcats needed desperately. Young is very similar to Hood. There are questions about whether his skills will translate to the NBA level.

14. Phoenix — Dario Saric (Cibona Zagreb): Saric, as noted previously, signed a two-year deal with Anadalou Efes and will likely remain in Europe at least one more year. So whatever team takes him will have to be patient. The team that does get him will get a virtual point forward and someone who has a lot of guard skills for his size at 6-foot-10.

15. Atlanta — Elfrid Payton (Louisiana): Payton has risen a lot in the Draft over the past few weeks. He put up big numbers for a Sun Belt team, but struggled a bit against the major conference foes he faced. Red flag?

16. Chicago — Rodney Hood (Duke): Lanky left-handed shooter with good athleticism and an ability to score. Has to fill in the rest of his game.

17. Boston — Zach LaVine (UCLA): Hard to pin down exactly what position LaVine will play. He has point guard skills and a ton of athleticism. Going to be real interesting to see how he puts it together. 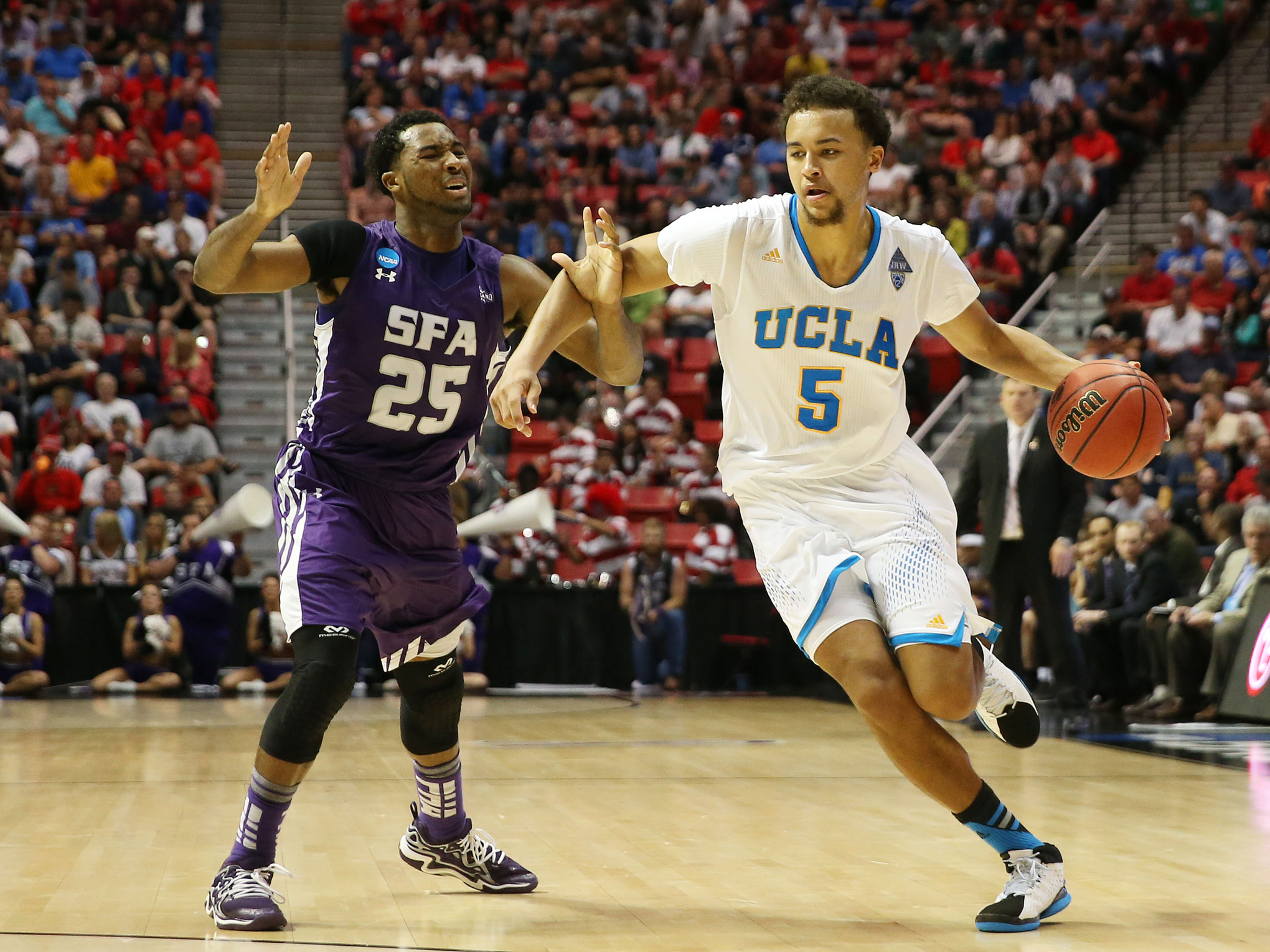 18. Phoenix — Kyle Anderson (UCLA): Most polished scorer from a high-scoring UCLA team. Should be able to fill in with a role, but let’s see what happens when he does not have the ball in his hands.

19. Chicago — Tyler Ennis (Syracuse): One of the best college point guards in the nation who put up a solid freshman campaign. Chicago is always looking for a spark from the position. Could easily learn under Derrick Rose.

20. Toronto — T.J. Warren (NC State): Great scorer at the college level, but did so as the star of the team. Needs to improve his 3-point shot and expand his offensive game without the ball.

21. Oklahoma City — Jusuf Nurkic (Cedevita Zagreb): Nurkic is a big man in the mode of Nikola Pekovic. A bit grounded, but tough and solid on the inside. Nurkic may spend a few more years in Croatia improving his skill before coming over.

22. Memphis — P.J. Hairston (Dallas D-Fenders): Gifted scorer for his size and played well at North Carolina and in the D-League. Off-court issues led him to leave school early and enter the D-League.

23. Utah — K.J. McDaniels (Clemson): McDaniels is a slasher who can cut and get into the paint and score in traffic. Going to have to really work on his jumper and become more efficient.

26. Miami — Shabazz Napier (Connecticut): Heat value shooters and need a point guard who can pump fake and attack. Napier is a natural-born scorer and leader. The perfect kind of guard to pair with the Heat’s stellar crew.

27. Phoenix — Jerami Grant (Syracuse): Bit of an undersized power forward. A definite project for this late in the first round, but has solid talent and athleticism to be worth the investment. This would be the perfect pick to stash if the Suns did not end up with Saric already.

28. L.A. Clippers — Mitch McGary (Michigan): Set the world on fire in the 2013 NCAA Tournament with his mix of size and shooting ability. He is a true stretch-4. But a back injury knocked him out of the 2014 season and off-court issues (a failed marijuana test) brought him to the NBA early. Still a very talented player.

29. Oklahoma City — Jordan Adams (UCLA): Another one of those combo guards the Thunder seem to love. Could easily put him in a backcourt with Russell Westbrook or Reggie Jackson and allow him to ease the ball-handling pressure off of them.

30. San Antonio — Glenn Robinson III (Michigan): A very solid college player who always faded to the background with the stars — Trey Burke, Tim Hardaway Jr. and Mitch McGary. But Robinson is a great athlete in his own right who is still putting all his skills together.