Everyone at Crossover Chronicles is really excited for this upcoming NBA Finals rematch between the Heat and the Spurs. Game One tips off tonight at 9 p.m. ET on ABC. But there are a lot of questions that need answering beforehand and a lot of storylines to watch.

Yesterday we took a look at the rematch and what 2013 will mean for the 2014 Finals. Now we move on to the impact this Finals will have on the legacies of two franchises.

Philip Rossman-Reich: So going back to what Matt was saying about the Spurs doing something they have not done yet — reaching back-to-back Finals. What does this series do for San Antonio’s legacy as a franchise? How about Miami’s? Can we call them among the elite franchises in the league history yet?

Matt Zemek: Referencing Bill Clinton, “It depends what the meaning of ‘elite’ is.”

That said, Finals rematches between highly accomplished organizations certainly do a lot to enrich their reputations, thereby enabling the winner to claim a larger piece of stature in the long run of NBA history.

If you look at NBA Finals history, two-thirds of a century have come and gone. The Lakers and Celtics occupy the overwhelming share of historical real estate in the NBA. The Bulls and Jordan won their six titles, but they haven’t been a significant presence in any decade other than the 1990s. San Antonio and Miami don’t have Chicago’s title haul, but they’re rapidly accumulating a broader and more expansive historical reach than the Bulls. If San Antonio wins this series, the Spurs — with a fifth title — should definitely be seen in the same light as the Bulls. If Miami wins — bringing the Heat a fourth title alongside the Spurs — the “elite” conversation becomes more complicated. 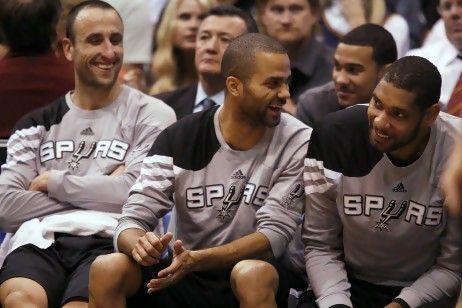 At any rate, if the Heat and Spurs produce (let’s say) three more years with a couple of Finals appearances and one title before this decade is over, they deserve to be seen as all-time elite franchises. If you go through the whole list of NBA champions, it might surprise you (as it surprised me) to find just how few franchises have won as many as three titles.

The Detroit Pistons and Philadelphia/Golden State Warriors, for instance, have more titles (3) than the New York Knicks and Philadelphia 76ers (2). If you had told me that before I looked it up, I would not have believed you, especially in the case of the Warriors.

Josh Burton: Another Finals win — the 4th overall for the Tim Duncan, Tony Parker, and Manu Ginobili version of the Spurs and first since 2007 — would cement San Antonio’s legacy for sure. This title would officially, in my opinion, clump them somewhat near the Jordan Bulls in terms of a consistent winner not just of regular season games but also of titles. Most people already view the Spurs as the league’s elite franchise and another championship would just elevate them that much more into the historical stratosphere.

Meanwhile, for the Heat, a win would put them on the proverbial edge of all-time eliteness just because of the possible dynastic potential. Already, this incarnation of the Heat is viewed as one of the more dominant teams in recent memory, and back-to-back Finals wins over a team like the Spurs would seem to finalize that viewpoint among most NBA-watchers.

Philip Rossman-Reich: Certainly the Celtics and Lakers belong in that all-time elite franchise discussion. The thing that separates them from modern-day “elites” like the Bulls, Spurs and Heat are that they have multiple generations of great teams. The Lakers won titles with George Mikan, Jerry West, Magic Johnson and Kobe Bryant. The Celtics won titles with Bill Russell, Dave Cowens, Larry Bird and Paul Pierce.

But many of those earlier generations of Lakers and Celtics did not have to deal with expansion watering down some of the talent in the league or the salary cap which makes it harder to keep a team’s best players for extended periods. Teams nowadays form and break up pretty quickly. The window to win a championship is short. There will not be many teams like the Pistons that could go to the conference finals and fail two or three times before breaking through to win.

This is why I think we have to consider the Spurs among the elite franchises. Certainly what they do after Tim Duncan retires will go a long way to setting their legacy. But the 15-year run that organization has had starting with their 1999 championship has been nothing short of incredible with the way the league is currently set up. No other team has had this much sustained success with the same core in recent memory. Especially with so much time between titles. The argument against the Spurs is that they have never won consecutive titles (nods at Phil Jackson). 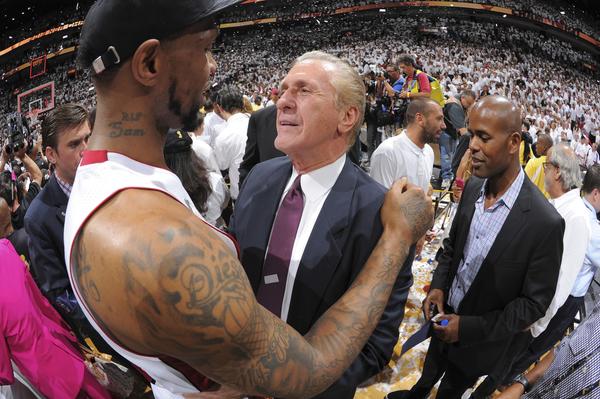 Pat Riley is hoping to celebrate another title and push the Heat into elite status. Photo by Andrew D. Bernstein / NBAE/Getty Images

The Heat meanwhile have two straight titles. That is not easy to do either. And Pat Riley did a masterful job building the roster and re-tooling after the 2005 and 2006 title pursuits. Longevity is still their key as things could fall apart pretty quickly. Riley’s teams have relied on building through free agency which is always shaky. So it is hard to call them an “elite” franchise right now. Miami has had some good teams dating back to the Tim Hardaway/Alonzo Mourning days in the late 1990s.

Stay tuned later in the day as we discuss the Finals’ impact on a specific player — Tim Duncan.