Everyone at Crossover Chronicles is really excited for this upcoming NBA Finals rematch between the Heat and the Spurs. Game One tips off Thursday night at 9 p.m. ET on ABC. But there are a lot of questions that need answering beforehand and a lot of storylines to watch.

The first storyline to watch is the rematch aspect. For the first time since 1998, the NBA Finals feature a rematch from the previous season.

We have been spending the last few days e-mailing each other prepping for this epic rematch.

Philip Rossman-Reich: Obviously the talk of this series is going to be remembering last year’s classic seven-game series — specifically Game Six. Tim Duncan has already noted that the team thought about what they left on the floor in Miami those final two games. What role will those memories have on the Spurs? Can you truly move on from that defeat? How much like last year’s series will this year’s series be?

Matt Zemek: Let’s answer that last question first. This year’s series should be noticeably different from last year’s — maybe not in terms of the final outcome, but in terms of the supporting casts and the paths these teams took to get back to the Finals.

First, the supporting casts: Rashard Lewis immediately comes to mind as a role player who will have to come up big for Miami if the Heat are going to make this a long series. Marco Belinelli knows the Heat well, due to his experience with the Chicago Bulls in last season’s playoffs. 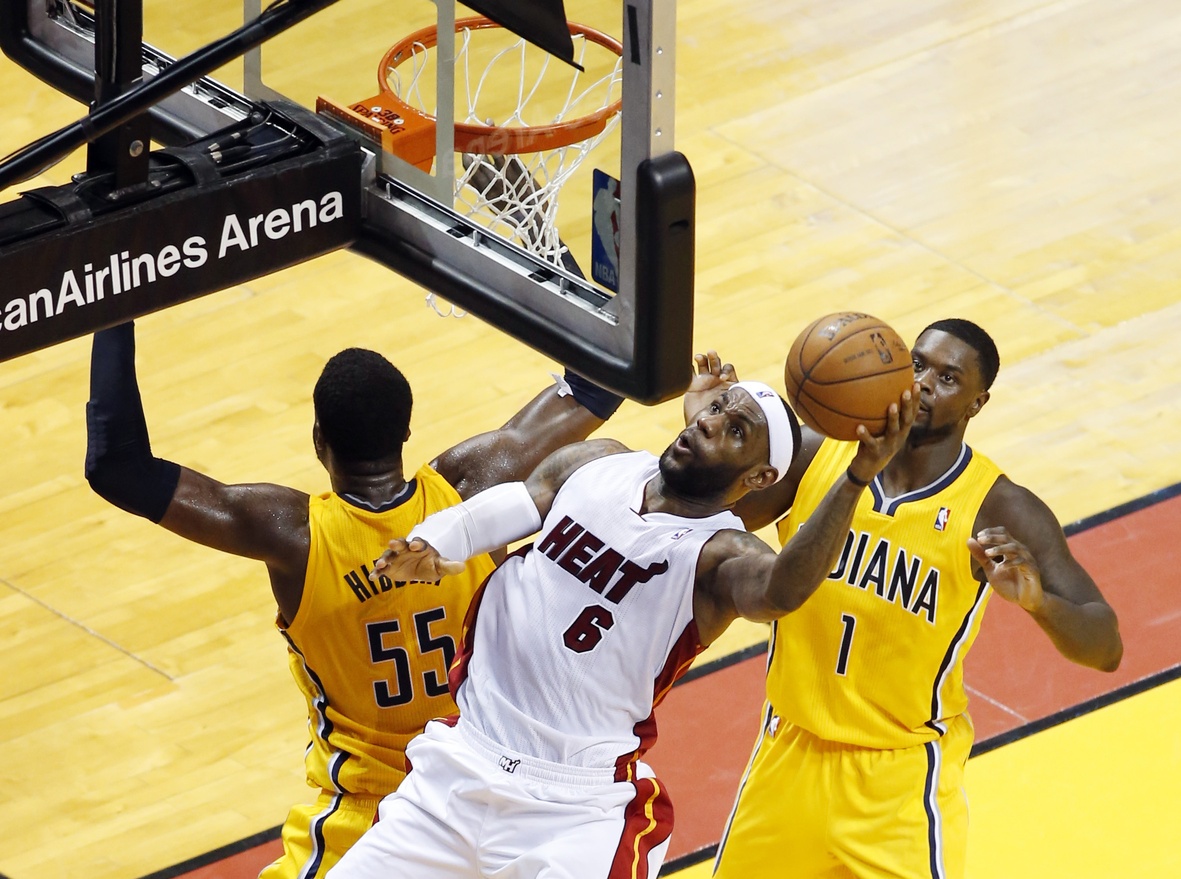 In terms of the roads these teams traveled to get to the Finals, Miami wasn’t pushed by Indiana the way it was last year. Miami entered the Finals battle-hardened in 2013, and that resilience (plus the Spurs’ missed foul shots late in Game 6) enabled the Heat to avoid buckling when on the brink… though Miami came close to doing so. San Antonio swept through Memphis in last year’s West Finals. The Spurs met pushback from Miami at home in Game 4 when they had a chance to land a kill shot, and they didn’t respond properly. This year, San Antonio received the much tougher conference finals test. When one compares the quality of Indiana’s passing to the quality of San Antonio’s passing, Miami’s defense will be challenged to a much greater level… and that’s without Danny Green hitting everything.

Now, as for the memories of the 2013 Finals and their presence in this series: The short answer is that in many ways, the Spurs already HAVE moved on from that defeat. Why? Because they’re back in the Finals, something few thought they’d do. It’s rather remarkable that this Spurs team, with Duncan-Ginobili-Parker at advanced stages of their careers, is the one that has achieved back-to-back Finals appearances. The act of getting back to the Finals shows that the Spurs have already triumphed to a certain extent. The fact that the Heat are their Finals opponent should only make San Antonio more relentlessly focused.

Josh Burton: For a veteran team, like the Spurs, the brutal memories from last year’s Finals loss to the Heat won’t make that big of a deal. However, I could see them as being beneficial, as San Antonio’s stars–Tim Duncan, Manu Ginobili, and Tony Parker–remember just how crushing that defeat was which makes them all the more motivated to not feel that way again. Obviously, the rest of the team feels the same way, but for those three guys, approaching the twilight of their careers–as far away as that is–they want to beat the Heat at least once in a Finals.

Yes, they certainly can move on from this defeat and aren’t going to let their past memories weigh down how they attack Miami in the upcoming series. The Spurs, more than probably any team in the NBA, know the importance of looking ahead to the next game and not dwelling on past ones and this is a quality that is going to help them a lot this Finals.

Finally, I really don’t think the series from last year is going to have much in similar with this year’s, if anything at all. First off, the Finals have now moved to a 2-2-1-1-1 format after it was 2-3-2 last season, a format which allowed the Heat to win Games 6 and 7 at home. Now, with San Antonio having home court advantage, the Spurs have a potential Game 7 on their home court should the series last that long. They also have Games 1 and 2 at home, where they are 9-1 this postseason and 32-9 during the regular season. If they can take both opening games in San Antonio, the Spurs would have control of this series and would have Miami playing catch-up. San Antonio couldn’t get that two-game advantage in last year’s Finals, which made them vulnerable to the Heat with the series’ last two games at home. 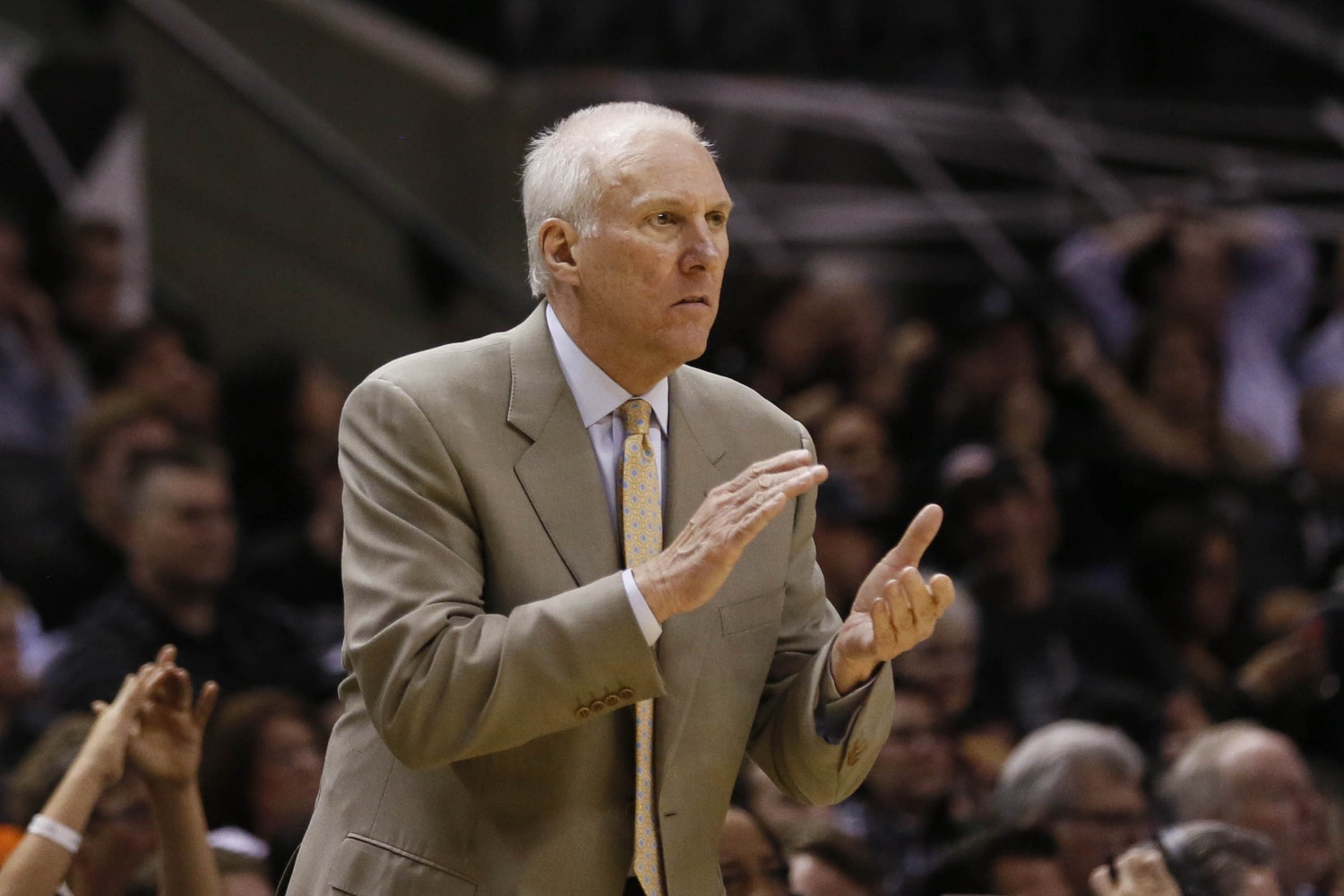 Gregg Popovich motivated his team by showing them their failure in Game Six. Photo by Soobum Im-USA TODAY Sports

Jeff Garcia: [Last year’s Finals will loom] extremely huge. The Spurs have not forgotten last season’s Game 6 debacle and how it cost them title No. 5. In fact, Gregg Popovich showed them the crushing loss to Miami at the start of training camp. Talk about motivation huh?

This Spurs team is looking for redemption which was apparent after their win in Game 6 against OKC when Tim Duncan (who isn’t one for smack talk) said the Spurs WILL win it all.

Talk about some locker room material for Miami.

The Spurs were seconds away for winning it all and the memories of coming up short is all the motivation they need.

[But] we’re talking about the Spurs here. If any team in the NBA that can forget and move on is this team. Pop was the group razor focused, and Duncan isn’t going to let that elusive title No. 5 slip his fingers (or rim out as in Game 7 of last year’s Finals) again.

[This series will be] very different. The Spurs are deeper, have home court while the Heat lost some punch off the bench and rely heavily on their Big 3. Face it, San Antonio has the edge in most of the matchups from point guard, power forward, bench, coaching, and can throw one of the best defenders in the league, Kawhi Leonard, at LeBron James. They have the shooters (Danny Green, Patty Mils, Matt Bonner), the size (Boris Diaw, Tiago Splitter, Duncan, Aron Baynes) and their youngers players have growm from the loss to the Heat last season.

Add all of this up and Miami will finally get challenged in this postseason.

Philip: I think Matt brings up a really good point. It is really surprising that THIS is the Spurs team that finally achieved back-to-back Finals appearances. This was the group, after all, that has been dead and buried and heading out to pasture for so long now. Gregg Popovich is just a master at managing his roster and his players to get the best out of them.

I do think this is a veteran team that has used the loss last year to drive and motivate them throughout the season. But when it comes to this actual moment, they are more than capable of recognizing this is an entirely new series and not play against the past. The hunger and drive should already be built in at this point. And you would expect nothing less from the Spurs.

This series should be pretty different from last year, only in that the Heat are not as deep as they were last year. They will rely a lot more on LeBron James and Dwyane Wade to carry them offensively than they did perhaps last year. Miami should, like Oklahoma City, force San Antonio to go small with Boris Diaw getting a lot of time at power forward. It will be interesting to see how the teams adjust. And the Heat showed an ability to just turn it on in getting through the East.

Next up, we will discuss the legacy impacts this series might have.