Following Wednesday’s blowout victory over Dominican Republic, there are still some rough edges around this Team USA that have to be figured out.

Yes, the U.S. destroyed the Dominican Republic in a somewhat hostile crowd at Madison Square Garden, but the Americans were more talented and far deeper than their upcoming Group C opponents. Some of the struggles in half-court offense showed up and a tougher opponent is going to test them.

That makes the next few days for coach Mike Krzyzewski all the more excruciating.

His roster pool of 16 has to be cut to 12 before the beginning of the FIBA World Cup on Aug. 30. Team USA plays one final exhibition game at home in New York City against Puerto Rico on Friday before taking off for Spain for a single warmup against Slovenia (a much tougher opponent than the ones they will see in Group C).

You would imagine Team USA would have everything figured out roster-wise before heading to Spain for that friendly.

The U.S. will not make cuts before Friday’s game, making the next day of practice and the next friendly incredibly important for those on the fence (see below).

At his postgame presser, Coach K just announced that there will be no players cut before Friday's game. So 16 make it to Thursday's practice

So four players are out for Team USA on the current roster. Who should feel safe on Team USA? Our projected depth chart and explanation should introduce you to Team USA:

DeMarcus Cousins: The big intrigue on this team is just that — big. Team USA is down some size for this tournament with Kevin Love, LaMarcus Aldridge and Blake Griffin withdrawing before training camp opened. Anthony Davis has firmly established himself as the starting center, but everyone knows foul trouble is right around the corner.

Cousins provides some solid low post play and has continued to play better and better when the lights come on. He fits this team really well offensively.

However, there are still some perceptions that his attitude is a problem. There are still questions about what he can do defensively too.

Mason Plumlee: A week ago it seemed like Plumlee was a lock to make the Team USA roster. Krzyzewski loved his ability to play defense and his selflessness. The problem is he provides almost nothing offensively and is complete non-threat with the ball in his hands. That could spell trouble for his playing despite any athleticism or defensive capabilities he has.

The last two friendlies have seen him really struggle though. His hands are not great yet and his offensive shortcomings make it really difficult to have him on the floor for long stretches. That could mean trouble if Anthony Davis were to get into foul trouble.

Andre Drummond: Drummond is probably the midpoint between Cousins and Plumlee on the offense/defense scale. He obviously provides a huge boost on the defensive end. That is where he is best in the NBA. His offensive game is still very very raw though. That could leave defenders hanging off him or zoning him and forcing the U.S. to trust him.

Drummond has struggled in the friendlies and reportedly in practice. It was only in recent days and the Dominican Republic game that Drummond really began to find his footing. That might be too late to make the team.

At this point, among the three centers, it feels like Cousins is the best fit for this team. He still has to improve defensively, but his offense is so good that it could make up for any defensive problems he might have. He can recover and make those plays. 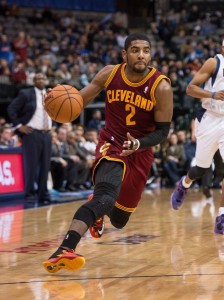 Kyrie Irving: Team USA seems to be suggesting that Irving is an integral part of the Team USA program. His spot should not be so locked in though. Aside from the intrigue at center involving the three players above, there seems to be some intrigue at point guard.

Clearly Team USA is favoring some versatility at this position. Stephen Curry, Kyrie Irving and Damian Lillard can each play point guard or shooting guard. They seem to imitate a lot of their skills.

The U.S. might need the help at point guard with Rose’s health somewhat in question. Irving is the best pure point guard remaining on the roster.

Damian Lillard: It is very likely that Lillard and Irving both make the roster. Both are solid players and provide a lot from the point guard position. Even if Lillard and Irving are virtually the same players. At least for Team USA.

Lillard might be behind Irving at this point because Irving is the more natural point guard. Lillard is more shooting guard. And the U.S. has plenty of players to fill that role.

Chandler Parsons: I cannot really get a good peg on where Parsons fits into this roster. Team USA needs a true stretch-4 and Parsons is really the only one that fits the bill on his roster.

When you watch him on the international friendlies, it is hard to point him out. Parsons just has not made much of an impact. He is young and does not have a ton of experience yet. Parsons would fit this team well, but he might be the odd one out.

Derrick Rose: Rose will make the team. He appears set to play in Friday’s friendly after missing most of the practices this week. There has to be some concern about his chronic knee injuries and soreness. Team USA is relying heavily on him to create offensively and get some space for the shooters.

Kyle Korver: Tough to cut a great shooter like Korver. Especially on a team that will need great shooting. There are already a lot of great shooters though. Korver seems the odd man out.

Gordon Hayward: Probably thought of as a shooter on this team. Was always going to be one of the first players cut unless he really impressed from beyond the arc.

Anthony Davis will likely be the featured player for the U.S. at the FIBA World Cup. Count him in. David Banks/USA TODAY

Anthony Davis: Probably the best player on the team. Expect him to be the defensive linchpin and also a really key player on offense. His ability to step out on the perimeter and defend will also be key internationally.

James Harden: Harden has Team USA experience and plays better defense for the national team than he does for the Rockets. Meaning, he plays some defense. Probably the best pure scorer for the team. Must be a creator.

Stephen Curry: He is your likely shooting guard. Obviously the best shooter on a team that will rely on its 3-point shooting.

Rudy Gay: A late addition to the roster pool, Gay has Team USA experience and clearly some trust from the coaching staff. He will probably be a power forward for the World Cup and could be a nightmare for defenders chasing him around the perimeter.

Kenneth Faried: The guys works hard and is defense-first. Team USA needs guys, especially protecting the paint, who can protect the rim and clean up defensively. Faried’s athleticism is a lot to have for this team.

DeMar DeRozan: Could really find his stride in this tournament as an in-between player. I really like his ability to hit mid-range jumpers and also focus on defense as a secondary piece.

Klay Thompson: He is a great shooter. Team USA loves having great shooters. Thompson though provides a little bit more. He has played really well in the friendlies and should have cemented his spot on the roster.

There are five spots remaining after the seven guys mentioned above as “in.” I am already cutting Kyle Korver and Gordon Hayward. Who gets the remaining spots?

As I noted above, Derrick Rose, Kyrie Irving and Damian Lillard are probably all in. Rose for obvious reasons. Lillard and Irving are difficult to separate but they are probably the two best players on the list remaining.

That leaves a lot of question marks at center and who backs up Davis.

I would not have said this a week ago, but I think DeMarcus Cousins takes one of the spots. He has a more complete game that would fit the international game. Teams would not be able to ignore him on offense and he would provide some solid minutes off the bench. I think he has the inside track at the moment.

That last spot probably goes to Chandler Parsons. Team USA could use another bit of size on the perimeter. Parsons provides that. He can hit the shot and be a stretch-4. Can he defend at power forward and small forward? That is the question. Team USA is valuing versatility and that gives Parsons a bit of an edge.