The Donald Sterling saga will not end.

A few weeks ago, Sterling was in court fighting his estranged(?) wife for control of the trust which owns the Clippers. No decision was made as of yet and so Steve Ballmer and the Clippers are kept in limbo.

This delay and questions about the Clippers’ future, as well as the Sterlings’ involvement with the organization, are causing two major repercussions that everyone will be keeping an eye on.

That would be the Clippers may be desperate to sell and complete the sale to Ballmer despite any delusions Sterling might have over his ownership of the team.

The CFO of Clippers owner’s real estate business, Darren Schield, told the Associated Press that Sterling would have to sell a large portion of his real estate empire to cover $500 million in loans if he persists in trying to keep his interest in the Clippers, reportedly sold for $2 billion. Just think of how much Sterling is shooting his nose off to spite his face and make whatever statement he thinks he is making against the NBA and its owners.

The continued fight is going to be very bad for Sterling’s business. And the one color Sterling has consistently worried about and catered to in his time as Clippers owner is: Green. 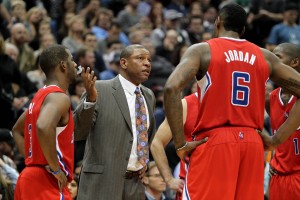 On the court, the continued battle could really do a number on the Clippers’ basketball staff — namely the guy who is in charge of basketball operations.

Doc Rivers told Clippers CEO Richard Parsons he would not want to return to the team if Sterling remains with the Clippers after this whole ordeal, David Leon Moore of USA TODAY reports.

Rivers became the de facto spokesman for the team through the whole initial fallout. The players decided to focus on the Playoffs (kind of important) and let Rivers address the issues. He did so eloquently and did a great job taking pressure off his team.

Add in that he is a fantastic coach and players were lining up to play for him and Rivers is an incredible asset. He is as much a reason the Clippers sold for $2 billion and are a contender to win the title in 2015 as Chris Paul and Blake Griffin are. This is a very different team without Rivers running the ship.

Parsons characterized Rivers’ potential departure as a “disaster” for the team.

It certainly would be.

Sterling’s continued fight for the Clippers is clearly hurting the brand and its potential value. In fact, much of the Clippers’ worth and value comes from Sterling NOT being there. His hanging around just makes things worse for the organization. It did not take a genius to figure that part out though.

There are now actual consequences for Sterling’s fruitless fight for the Clippers. He could lose his star coach (and president of basketball operations) and then could lose a very significant set of change.

Time to throw in the towel, methinks. No sense dying on principle (no matter how skewed they may be).