Tanking is a perceived problem this time of year in the NBA. Everyone seems to accuse the teams at the bottom of the standings for the race to the bottom and the quest for more ping pong balls.

Adam Silver has come out saying he believes tanking does not exist, calling it rebuilding. Mavericks owner Mark Cuban pretty much said tanking exists and it is undeniable — its effectiveness is in question. The Sixers do make you wonder.

The NBA media seem to make it matter. They have brought it up for the past few years as the Bobcats and other teams (sorry to single you out Charlotte) have seemingly gotten worse and worse records. Statistics show this is not quite the case. 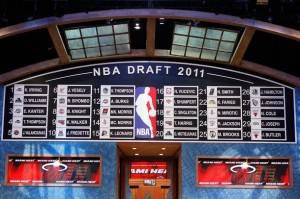 It could be worse.

The old system before the Lottery was decided strictly by record with a coin toss possibly deciding the top pick between the worst team from each conference. The Lottery actually creates a disincentive for losing by not guaranteeing the top pick to the worst team. The calculus general managers have to weigh have not shifted enough to fully prevent teams from sinking to the bottom.

Fans, riled up by Twitter it seems, have had enough and a group of them — sponsored by FansRising — are preparing an online petition for commissioner Adam Silver urging change to the current draft system.

Yes, it is called NBArassing (although it hardly is in a league where having the best player in the world tips the scales more than in any of the other major American sports).

Ideas have been floated around to try to change the system from The Wheel idea that was floated around in the middle of the year to the V Plan, which rewards the team that wins the most games after being eliminated from the Playoffs the top overall pick. Each has its own problems. The Wheel allows teams and draft prospects the ability to plan out their futures with certainty but leaves a lot to chance for the really bad teams. The V Plan only shifts the time when teams would focus on losing while keeping some incentive to win.

There seems to be momentum however to try something new and re-visit this issue. It appears something is going to happen.

And fans are trying to do something about it through this initiative. Whether the commissioner will listen is another issue.