Shooting guard/small forward Jimmy Butler for the Chicago Bulls will officially be a restricted free agent this summer. The deadline for contract extensions passed on Friday, and the Bulls decided to take their chances when Butler heads to free agency in the summer of 2015.

This year will be the highest paying of his career at just over $2 million for the season. But isn’t he worth more than that?

Most people who have only even watched a playoff series or two with him in it, would say yes unequivocally. That would be the answer, but then the question becomes exactly how much is he worth?

You can look at guys like Chandler Parsons, Lance Stephenson, and Gordon Hayward who all play a similar position to Butler. However, he should not be expecting to get as much money as those guys if only for the sole fact his name is not as sexy. 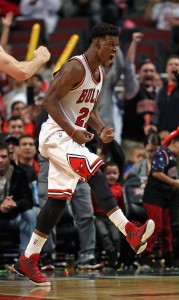 Jimmy Butler has a penchant for making big shots. Will he still be doing them for the Bulls? Photo by Jonathan Daniel/Getty Images

Jimmy the Butler has always been a solid player for coach Tom Thibodeau and he especially shines in the playoffs when Derrick Rose has been absent the past couple of seasons. He does a lot of things for the Bulls, especially without a true point guard running the show. He can handle the ball well enough to get it up the court and initiate an offense and has also shown a penchant for hitting some clutch shots. Last season he averaged more than 13 points in the regular season and playoffs while playing some good defense as well.

Now it is his time to show the Bulls brass that he is going to be worth keeping no matter what he is offered in free agency next summer. Derrick Rose is back and Butler will finally be able to play off the ball more and be a part of a real offense and not one run by “Captain” Kirk Hinrich.

Butler thinned down and got stronger this offseason so hopefully that will help him make his case, but he will fall in the $10-12 million a year range if he plays like he has been.

For his sake and for the Bulls’, I hope no one goes after him because the Bulls could really use his versatility on the floor for them rather than against them.

A University of Florida grad, Ben likes basketball way more than he should. He gets excited about a Timberwolves-Kings game so that should tell you how intense the passion is for him. His favorite teams are the Spurs and Magic because he likes to be on both ends of the winning spectrum.