The Lakers had such dreams for the offseason.

Even with Kobe Bryant coming off a season where he played all of six games before injuries to his knee forced him out for the remainder of the season. He still signed a two-year extension worth $48.5 million. That will tie the Lakers cap up somewhat to Bryant for the foreseeable future.

When it came time to hitting free agency this summer to help the Lakers improve off a disastrous 27-55 season. The whole organization is in complete upheaval as the team tries to find its footing after Dr. Jerry Buss’ death and still does not have a coach (although Byron Scott is reportedly coming in for a third interview and remains Bryant’s favorite). This is as shaky as the Lakers have been in a long time.

So with the funds the Lakers had to attack free agency, what could they do?

For this team, out is Pau Gasol, Kendall Marshall and Chris Kaman. In come Carlos Boozer, Jeremy Lin and Julius Randle. Sorry if Lakers fans are not jumping out of their shoes at that haul. There were dreams at one point of getting in the LeBron James conversation or even in the Carmelo Anthony conversation. This is the Lakers after all. They have to shoot big.

But ask Kobe Bryant and he would say the Lakers did all right:

Kobe: "I can sit here and tell you with 100 percent honesty that I'm happy with the effort the organization put forward this summer"

Bryant has high standards — championship standards. He is not going to want to spend his final two years near the bottom of the standings. The Lakers are not an organization that gets an A for effort.

Did Los Angeles accomplish what they needed to do? Let’s take a look at their depth chart from last year compared to a projected depth chart for this year:

In essence, the BIG changes came in the front court where Chris Kaman and Pau Gasol are being replaced by Carlos Boozer and Julius Randle. It is very hard to tell exactly what difference Randle will make. He is pretty refined for a player with just one year of college experience. Big men usually take a bit longer to develop.

The better direct comparison is between Boozer and Gasol. They are about the same age and have the same accolades — and similar baggage.

Last year, Gasol averaged 17.4 points per game, 9.7 rebounds per game and shot 48.0 percent from the floor. It was a major bounceback from a rough season paired with Dwight Howard. He definitely worked better with a center who did not demand the ball as much and could even step out and hit a jumper if left open (hello, pass-happy Joakim Noah). 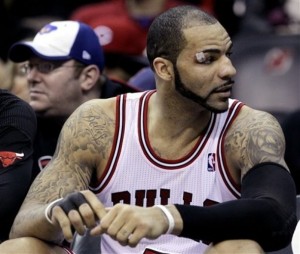 Carlos Boozer spent a chunk of fourth quarters on the bench last year for the Bulls. Kobe will not like that. Photo by AP Photo/Julio Cortez

Boozer’s stat line was more modest at 13.7 points per game and 8.3 rebounds per game on 45.6 percent shooting. From a pure numbers standpoint (and that does not even get into individual defense), Boozer seems like a clear downgrade.

Now, something should be said for the way Tom Thibodeau used him. Boozer played 28.2 minutes per game last year, his lowest since his rookie year. Thibodeau took to leaving Boozer on the bench for the entire fourth quarter, preferring the defense and athleticism from Taj Gibson.

Just based on those observations, it feels Boozer is a downgrade from Gasol. All he does is provide a cheap-ish veteran that can provide maybe some of the same offensive numbers and little else. Lin will have to make more of an impact.

In reality, Bryant may be saying publicly that he approves of the Lakers offseason, but the team seems no closer to winning a title. They still feel like a team that will miss out on the Playoffs barring Bryant returning to full health and simply willing them into Playoff contention. Home court seems out of the picture — especially since the Lakers have yet to hire a coach.

No, the purpose of this offseason was keeping cap flexibility for the summer of 2015 and the 2016 season. The Lakers have no cap room this summer, but are expected to have significant cap room next summer with just $35.1 million committed in guaranteed salary for next year. Bryant makes up $25 million of that.

Los Angeles will be players in free agency once again. And they could have another high lottery pick to play with as well.

As always, the Lakers will not be down for that long. Although this year might be particularly tough with the roster the team appears to have put together and the mystery surrounding Bryant’s health.