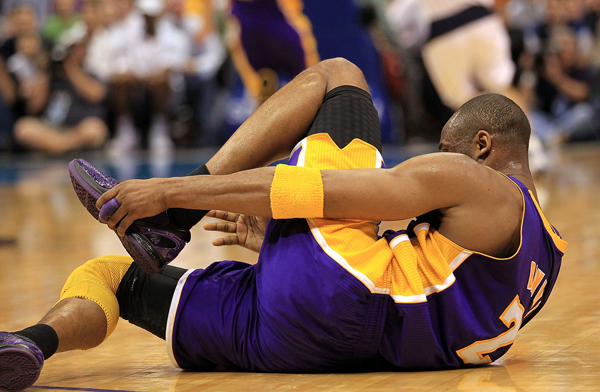 The Lakers announced Wednesday that Kobe Bryant will miss the remainder of the season as he recovers from a knee injury sustained in December. Bryant, recovering from a ruptured Achilles tendon suffered late last season, suffered a left tibial plataeau fracture in mid-December.

Bryant had hoped to return at some point this season. But as the Lakers have fallen to last place in the Western Conference, there seems to be little reason to play the 17-year veteran. Especially considering the extension he just signed.

"It feels all right," Bryant said during a press conference Wednesday. "It’s still a ways to go, not as far the last time I spoke to you guys. I’ve stepped up the intensity a little bit. I’ve started moving from the bike to doing some elliptical, looking to do the treadmill in a week or so. Just continue to go from there."

Bryant said his timetable for returning will not change and he still hopes to be back in time for the start of next season. Bryant said he did not believe he would be done for the year until yesterday. He said he did not see the necessity to try to come back and see where he was at before the season ended.  He seems to know his body and what it needs to be ready for next season.

Theo ne thing Bryant does not seem to be cool with is the losing. He estimated the team is "like 100 games under .500." The reports have already surfaced that Bryant does not want Mike D'Antoni as the team's coach next season. There will have to be changes in Los Angeles as Bryant has become accustomed to a certain way of playing and living in his career.

It appears Los Angeles' trip to the bottom of the league and the top of the lottery board is complete with Braynt on the shelf for the year.