An optimist, a pessimist and a realist walk into a bar… to watch a Lakers game.

It does not matter how you slice it, the Los Angeles Lakers’ 0-4 start is bad – Ryan Reynolds as the Green Lantern kind of a bad.

And domino after domino, the problems keep coming.

Steve Nash kissed his season, and probably career, goodbye and should be looking into trading in his sneaks for some orthopedic shoes.

Julius Randle, well, he tasted the NBA for a millisecond before breaking his leg. Seriously, I have had pieces of Double Bubble with flavor lasting longer than Randle’s rookie season did.

It is a shame. Honestly, it is.

You either love or hate the Lakers, but even if you hate them, it is never fun to see a team drown like they are.

At the same time, it is exhilarating, yet worrisome, that Kobe Bryant is single-handedly carrying a franchise when the window of opportunity is not just closed but locked, boarded up, and prepared for hurricane-force winds.

Yet, like a devoted husband, Bryant is choosing to honor his vows. He said he does not want to leave L.A., and he wants to retire a Laker.

Despite the troubles they once had, it has been a good run. It only makes sense to see it through, right? 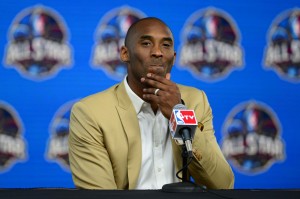 But is it fair to Bryant?

Here is a guy whose career has been a roller coaster of sorts. He went from being Michael Jordan’s heir to the league’s villain and onto becoming the omnipotent oracle of the NBA.

Is it fair for him to sit back and watch his chance for a sixth championship circle the drain?

The optimist says there is still time. Bryant may be 36, but he is in phenomenal shape, and crazier things have happened.

Maybe Jim Buss can come up for air, from his own you know what, and surround his living legend with a few more pieces to make a title run. Mitch Kupchak can pull it off – if given the opportunity.

Hell, he is the man who traded Kwame Brown and Javaris Crittenton for Pau Gasol. Granted Marc Gasol was in the deal, but two rings, people, two rings.

There is always a chance the Lakers could land a big-name superstar or two in free agency next year. Rajon Rondo could shift time zones and bring “Show Time” back to L.A. – like Buss wants.

Greg Monroe could be the next big, low-post scoring option for Byron Scott to utilize.

Speculation feeds the fire. And oh my, is it fun to watch it burn.

The Western Conference is loaded with talent and depth. There is not a snowball’s chance in hell they make it to the playoffs – let alone the NBA Finals.

It is time to finally trade Bryant. Let him go to a contender and finally capture the majestic sixth title, so that for one instance in time, 23 and 24 can be equivalent.

Imagine what New York could do if they put Bryant next to Carmelo Anthony. Derek Fisher would hone the triangle like his Zen Master did if he had his old running mate alongside him. And who better to teach Melo the ways of the triangle than someone who has grown up in it?

Gregg Popovich would not mind plugging Bryant into the go-to scoring role when his big three are rebooting for the postseason.

It is not only conceivable, it is the wise choice. Los Angeles can rebuild around Randle and draft picks, and Bryant can maximize his final minutes.

Sitting quietly next to the glowing optimist and the bursting pessimist is the realist – quietly sipping his drink.

He watches Bryant go to work… night in and night out.

And after each loss, all he can muster is, “A captain goes down with his ship.”