Yes, this NBA Finals series has been an embarrassment.

Absolutely right. No doubt about it.

It’s just not the Miami Heat.

Yes, it’s unmistakably disappointing — that’s the right word — that what seemed like a seven-game heavyweight bout after Game 2 now looks like a five-game quickie. It’s also disappointing that the Heat — reduced to stunned bystanders in this series, as shown in the photo above — were not able to come up with a better showing on Thursday night in Game 4, precisely at the point in time when they needed to get off the deck. However, for all the things the Heat did poorly, these Finals are far more about all the things the San Antonio Spurs are doing properly… and exquisitely… and with no one man hogging the ball or the credit.

The Spurs are the embarrassment at the heart of the 2014 NBA Finals… an embarrassment of basketball riches. With two full days off until Sunday’s Game 5, hoops fans should be busy appreciating what San Antonio achieved this past week in Miami, instead of thinking — mistakenly and uncharitably — that the Heat have embarrassed themselves.

In order to make this central thesis clear, start with this tweet and then recall the legacy of one of basketball’s greatest teachers, who left these earthly bounds during the playoffs… but did not gain as much media attention as he should have, given the emergence of the Donald Sterling story at the time.

Indeed, as Kevin Flaherty said in the tweet linked to above, the San Antonio Spurs are moving their bodies and the basketball the way the 1977 NBA champion Portland Trail Blazers did. Everything that coach Jack Ramsay wanted basketball to become was embodied and actualized in those ’77 Blazers and in the 1978 team that destroyed the NBA through 60 games until Bill Walton suffered the foot injury that snuffed out the life of a budding dynasty before it ever had a chance to grow.

Ramsay, who died in late April — just as his beloved Blazers were in the process of winning their first playoff series in 14 years — was overshadowed by Donald Sterling. Timing can so often be unfortunate in life and death; on a slower newsday, many Americans would have been much more aware of Ramsay’s presence and what he lent to this sport over decades as a foremost teacher and mentor to players and coaches alike. Yet, the Spurs’ clinic in these Finals allows for a perfect occasion in which to magnify what Ramsay brought to basketball: chiefly, a generous heart. 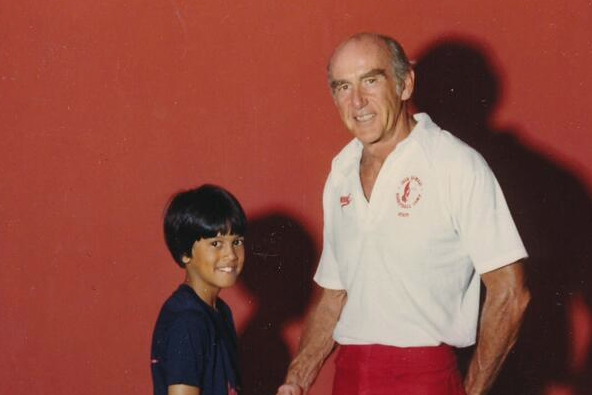 Miami Heat head coach Erik Spoelstra grew up in Portland and knew Jack Ramsay since he was eight years old. Spoelstra then had the great fortune of being able to talk to Ramsay when he became coach of the Heat. Ramsay worked as a Heat TV analyst for some time and still enjoyed close proximity to the organization when he moved from his Heat role to ESPN. Ramsay spent the later years of his broadcasting career as a radio voice more than a TV presence, but that reality didn’t diminish his impact on the sport or reduce his willingness to help modern-day NBA coaches and players. (Photo courtesy of Bleacher Report.)

Ramsay, as noted in the photo caption above, knew Miami Heat coach Erik Spoelstra for quite some time. Ramsay also worked for the Heat as a broadcaster for nearly a decade before moving to ESPN. Yet, the size of Ramsay’s heart knew no bounds. Generous with his time to anyone and everyone interested in learning about basketball — and how to grow both in it and from it — Ramsay established a bond with San Antonio Spurs mastermind-cum-architect Gregg Popovich as well. He was that sort of person, one who gained respect and admiration from people throughout the sport.

Viewed strictly through the prism of his long(er) association with the Heat, it would stand to reason that Spoelstra and Miami would have benefited more from Ramsay’s accumulated wisdom. However, if we’ve seen an NBA team come close to actualizing Dr. Jack’s vision and matching the standard of the 1977 Portland team which first brought it into existence, the 2014 San Antonio Spurs have laid down their marker. On Tuesday in Game 3 and Thursday in Game 4, the Spurs have caused basketball lovers to gush with due admiration, all while relegating the Miami Heat to the shadows… which is never a very easy thing to do.

If you want to make yourself look foolish, there’s only one thing you have to do at this stage of the NBA Finals: Insist that this series is an embarrassing effort from the Miami Heat more than an exalted, vintage performance by the San Antonio Spurs. If you make this about the Heat and not the team that has carved them up like a Thanksgiving turkey in consecutive Finals road games, you’re losing sight of what brilliant team-oriented basketball looks like. You’re also losing sight of what happens when a team makes four consecutive NBA Finals.

Let’s tackle that latter point — about making four straight Finals — first. The 1984-1987 Boston Celtics and the 1982-1985 Los Angeles Lakers were the last two teams to make four straight Finals. Neither one of those teams captured a majority of those consecutive championship series; they both split the four. The moving parts of any professional sport will normally create small but crucial differences at the highest reaches of elite competition. Making four straight Finals and winning two against determined opposition? That’s not failure; that’s success.

Failure? Try Chris Paul and the Los Angeles Clippers, both still without a conference finals appearance to this day.

Failure? Try the Indiana Pacer team America wanted to move on from and forget about.

Failure? Far more than the teams which make the conference semifinals or finals, how about identifying the Cleveland Cavaliers and Detroit Pistons as teams that, as shown by their inability to make the playoffs in THIS YEAR’S Eastern Conference, truly slipped on the banana peel and fell into a pit of mud.

Failure? Try the Minnesota Timberwolves, who have squandered many years of Kevin Love’s career. Try the Houston Rockets, who — like the Clippers — have no excuses as they enter the 2014-2015 season, and must live up to their immense talent… or else.

The Miami Heat have failed to be better than only one team this season. If it’s failure, it’s only in the narrowest and most technical sense, certainly not in any larger and more expansive context… especially when you’ve made four straight NBA Finals.

In many ways, what you saw last night in Game 4 — namely, the end of the Heat’s 13-game playoff winning streak following a loss, dating back to Game 6 of the 2012 Eastern Conference Finals against the Boston Celtics — represented the laws of averages finally whacking the Heat in the face. For two years, this team always responded to postseason adversity in the proper manner. Instead of allowing the Game 4 wipeout to diminish your appreciation of the Heat, the fact that this team fended off all comers for two years should allow you to recognize just how much Miami has accomplished in the Big Three era.

But enough of the Heat — the story of the 2014 Finals, the story of how basketball has come oh-so-close to Jack Ramsay’s vision for the sport, is found in the San Antonio Spurs. What’s particularly impressive — and moreover, enjoyable — about these Finals is that they have so clearly conveyed to viewers how devastatingly effective a blended team game can be. 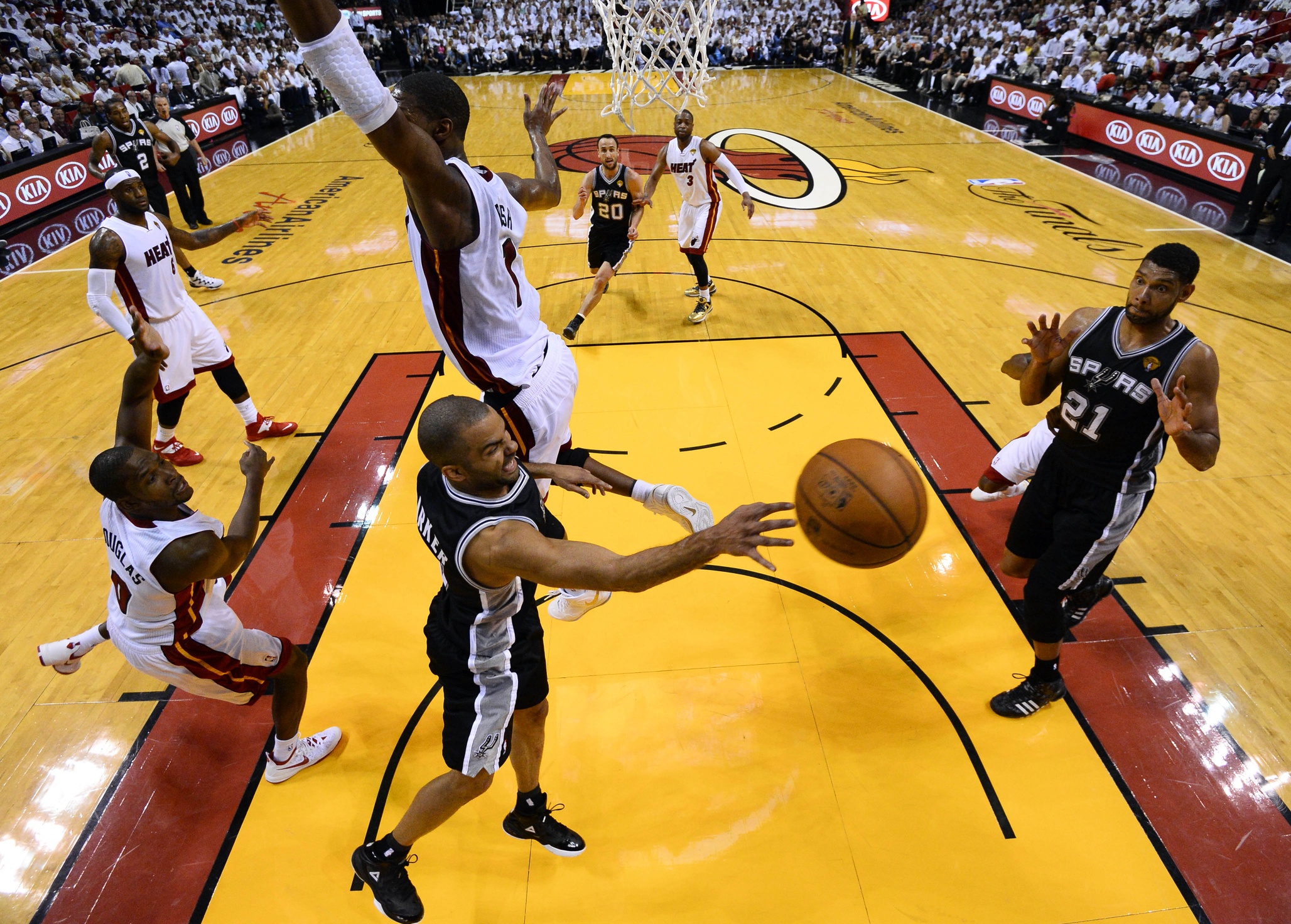 If you’re an opponent, this is what the Spurs do to your defense. If you’re a fan of great basketball (and not a Heat partisan), the Spurs make your insides tingle with ecstasy when you see tic-tac-toe passing such as this.

Look at that photo above. Look at the Spurs’ ball movement and instincts take over. This is what you’ve been seeing the past two game nights in Miami on Tuesday and Thursday. From this symphonic harmony, just exactly who is going to be the NBA Finals MVP if indeed the Spurs close down the show on Sunday in Game 5?

Tony Parker will probably get the nod, if only because he’s been this team’s best, most central, and most important player over the course of the full season. He made solid contributions in Game 1 and was terrific last night in Game 4. Yet, if viewed purely on merit and not on the politics of MVP awards, you could just as easily give the MVP right now to several other members of the Spurs.

Kawhi Leonard, after this series stood at 1-1 and was very much a question mark to all who tried to analyze it, busted loose and changed the entire tenor of the Finals. After a combined total of 49 points and 18 rebounds in Games 3 and 4, Leonard has been the Spurs’ best player in the two games that have mattered most in the series.

Danny Green unfurled the shooting flurry that won Game 1 for the Spurs. He joined Leonard as a central co-creator of the surge that overpowered the Heat in Game 3. His defense has been terrific, and he continued to land haymakers with his three-point shot in the first half of Game 4. He’s been as central as any other Spur to the demolition work done against a great opponent through four games.

Boris Diaw, who can’t begin to compete with any of the three teammates just cited in terms of quickness or footspeed, has nevertheless made himself and the Spurs immensely comfortable in the Finals with uncanny court sense and a finely-honed ability to read what defenses are doing. Diaw’s passing is a central, not peripheral, part of what the Spurs are doing.

If you wanted to give Diaw the MVP award right now precisely because of the extent to which he is exposing and distorting the Heat’s weary defense, you would not be out of line. You would also be making a powerful statement in line with Jack Ramsay’s vision of what basketball is supposed to be about: no, not numbers, but the blended game, with five players owning one mind and a larger flow which — when harnessed — is too much for one or two superstars to overcome.

Indeed, as an appropriate concluding note, it is worth mentioning that when Ramsay’s Trail Blazers — the aesthetic and methodological inspiration for the 2014 Spurs — defeated the Philadelphia 76ers in the 1977 NBA Finals, the nature of the battle was similar to this series with the Miami Heat.

The Heat entered this 2014 clash as the team with more superstar power in this series, at least in terms of having the best player on the floor. Similarly, in 1977, Julius Erving was the best player on the floor and a reigning colossus in his sport. It’s true that Portland’s Bill Walton was rounding into form as an elite center, but Walton — much like Tim Duncan under Popovich these days — attained greatness to the extent that he worked in concert with his teammates under Ramsay’s principles. Erving was the LeBron-like individual artist and performer who gave his team a good chance of winning the Finals.

After two games of the 1977 Finals, Philadelphia — with Doctor J not cramping up — took a 2-0 series lead. It appeared that “The Soloist” was going to trump the team concept. However, after a few games, the team finally learned how to counter the superstar, and Portland reeled off four straight wins to take the series in six, 4-2. We’ve seen something close to that pattern here. The Spurs, nothing if not inconsistent at home in San Antonio, ironed out all their rough edges and floored the Heat with flawless team play in South Florida. These Finals are occurring 37 years after the 1977 series.

Hopefully, it won’t take another third of a century (plus a few more years) to see the NBA Finals captured with a team game as fluid as the one the San Antonio Spurs are bringing to American television sets.