Clint Capela joined the team in Las Vegas a week later. He was not expected even to sign, stashed away in Europe as the Rockets cleared cap room to make a run at big-name free agents. This was exactly why the Rockets sent a bare bones squad to Orlando that week. No one was expected to have much of a chance.

Maybe one guy did. And he made his presence felt on that very first day.

“That was an exciting one play,” Johnson said a few days later. “It’s been a fun time, a bunch of people coming up to me and tweeting me.”

Eventually the Rockets struck out. They did not get Carmelo Anthony or anybody else of note. And they traded away Jeremy Lin and Omer Asik, holding the bag on trying to swap them for virtually nothing to make cap room. That left an open spot for Johnson.

The 42nd overall pick joined Capela, Houston’s first-round pick, in signing contracts with the Rockets. He is not the team’s only rookie anymore. But he is one that could make a very surprising impact.

Johnson was a super athletic player at Arizona, where he averaged 16.3 points per game playing largely in Aaron Gordon’s shadow (yet keeping pace with him scoring wise). Johnson was not quite a point guard at 6-foot-3 but not a great shooter either. He shot only 43.2 percent from the floor and 36.8 percent from beyond the arc.

It was no surprise to see him slip into the middle of the second round.

Johnson though is obviously athletic and in the right role he could really be an interesting player.

He was the only player at Summer League to record a triple double — a 15-point, 10-rebound, 10-assist performance in the Rockets’ finale in Orlando.  He averaged 13.8 points per game and shot 41.1 percent from the floor. He scored in double figures in every game except for one. His 3-point shooting remained suspect, but he was effective getting to the rim and could clearly finish.

He was also a bull, playing 13 games in the span of 17 days. Very impressive. 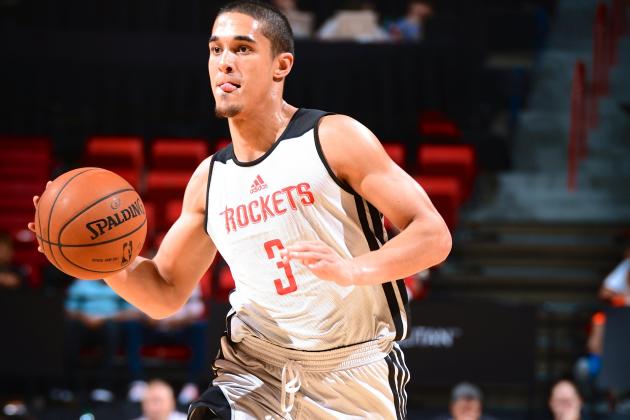 Nick Johnson earned his way onto the Rockets roster, even if their plans had come through. Getty Images

Through it all, Johnson continues to have to prove himself. Dunking is easy for him. He has been doing that since he was 12. He knows how to finish.

This is a new beginning for him though. He has several skills that are not commonplace on the Rockets’ roster. But he has to find a way to fit. His approach throughout Summer League as he tried so hard to make the roster was to be committed to the team.

“I have always been more of a team guy,” Johnson said. “Showing my individual skill hasn’t really been going one on one. It is more about making the right passes, playing hard on defense, getting in help, stuff like that.”

It was easy to be anonymous this summer. No Houston media traveled to Orlando and the team barely avoided finishing out of last place. This was a roster, the Rockets probably were not paying a whole lot of attention to.

That plan quickly changed. Now Johnson gets a chance to show his worth. Another change to explode onto the scene, just as he did earlier in July.