The FIBA World Cup is nearing the end of the group phase as the teams wrap up their five games in six day tour of their groups. The knockout stages will be starting soon and the pressure will ratchet up. At that point, only the best teams and the best players remain. A lot of the names we would be familiar with.

These early games are big for the scouts. It is time to find untapped pipelines and unknown players that could get on NBA or Euroleague radars. Every major international tournament has them.

Who are the rising stars coming out of the first round of play in Spain? There are quite a few: 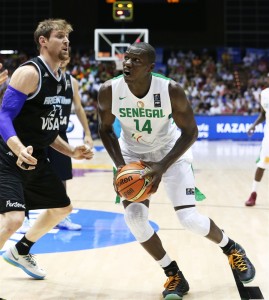 It took Dieng a little while to find his footing in the NBA. The Timberwolves did not play him regularly until March. In his final 19 games of his rookie season, he averaged 11.5 points and 10.8 rebounds per game in 29.3 minutes per game. He added 1.4 blocks per game for good measure. He made a difference defensively, just as he did at Louisville.

If Dieng had consistent minutes throughout the season, it seemed certain he would have been an All-Rookie first team selection (he still finished on the second team).

The strong finish to the season carried over to his play in Spain for Senegal.

Dieng’s performances have been impressive too. He scored 21 points and grabbed 14 rebounds in the opener against Greece. He had 27 points and made 11 of 12 free throws against Croatia in a landmark 77-75 win for Senegal. He only crashed back to earth some Wednesday against Argentina and their veteran big men.

Senegal finished group play 2-3 after a somewhat stunning loss to the Philippines. The loss ended up knocking Senegal into fourth place in Group B, setting up a matchup with heavy tournament favorite Spain in the Round of 16. Dieng will get a taste of the Gasol brothers.

Ayon remains a free agent after spending last year with the Hawks. He has never been a stellar NBA player, noted more for his adept passing ability and maybe for a little too much fouling (4.4 fouls per 36 minutes in his career). He is a quietly skilled player with the Spurs among teams chasing him.

If the World Cup was going to be his audition, he is putting on a good show as he typically does for his national team.

Ayon averaged 15.8 points and 7.5 rebounds per game as Mexico advanced out of Group C to set up a date with the United States on Saturday in Barcelona.

Ayon had 23 points against Slovenia in a 21-point loss and followed it up with 17 points and 13 rebounds against Angola. He got the day off Thursday with Mexico already securing passage to the knockout round.

If you include his play at last year’s FIBA Americas, it was pretty clear Ayon is “the guy” for Mexico. He will be on a NBA roster very soon after this tournament ends.

NBA fans hoping to get a glimpse of Dante Exum for really the first time have not been disappointed. But it has been another Aussie that has stolen the NBA headlines. Joe Ingles has generated more buzz of any non-NBA guy at the first round of the FIBA World Cup and it feels almost certain he will make his NBA debut in the near future.

Ingles is averaging a modest 11.8 points per game but take out his 0-point, 32-minute performance against Mexico, and he is averaging a much gaudier 15.7 points per game. The Maccabi Tel Aviv veteran is almost certain to get an NBA look now, which is really incredible for a 26 year old that was previously on no NBA radars.

Ingles struggled this past year at Maccabi Tel Aviv but has plenty of fans in and around the NBA, including his former coach David Blatt now with the Cavaliers.

Expect to see Ingles build off his strong World Cup with an NBA training camp invite and likely contract.

It is hard for Team USA guys to stand out. Most of these guys are the stars on their respective teams and have to limit their individual greatness to fit the team. Kenneth Faried is one star though who does not need the ball to be successful and make an impact. His work and effort has already saved the U.S. as the team has gotten off to slow starts and struggled to shoot the ball.

This comes from a power forward that some did not even have making the team. He might be the team’s MVP right now.

Team USA opted to eschew the small-ball lineups everyone expected and loaded on bigs. The Americans kept a traditional power forward in Faried in the lineup and have gotten a big boost from him.

Faried is versatile enough to get out and guard on the perimeter. His rebounding and activity around the rim has also freed Anthony Davis to run the floor — and vice versa. Faried’s presence has provided energy and freed up the floor for other players. Team USA might be in trouble without Faried on the floor.