The NBA Playoffs continue at 10:30 p.m. on TNT as the Warriors host the Clippers to break a 1-1 tie in the Western Conference first round. Before each game, we will have a quick preview of the upcoming game with a matchup to watch and a stat to chew on as you watch the game.

Not much to say about this game. While the rest of the nation was enjoying overtime of the Thunder and Grizzlies, the Clippers already seemingly had this one in hand and made the Warriors look awful. Blake Griffin came back to the lineup with a vengeance and neither Klay Thompson nor Stephen Curry could get going.

Playoff blowouts happen. Golden State did what it needed to do in getting the split. The Warriors had a reason to feel satisfied as the lead got too far away from them. Not a good reason, but a reason nonetheless. The trip back to ORACLE Arena puts the pressure back on Golden State to take care of home court.

The key to the Warriors winning Game One really was the absence of Blake Griffin from the lineup. When Griffin was in the lineup, the Warriors had a handful to deal with as the Clippers’ pick and roll game was that much more effective. Lee has never been the greatest defender and in Game Two, Griffin took advantage of that fact.

Lee is a very skilled offensive player though and someone who can spread the floor some and force Griffin or DeAndre Jordan away from the basket. Lee has to be aggressive though and cannot rely wholly on the jumper. If Golden State can put some pressure on Griffin and make him at least think about his foul situation, it might put Los Angeles in a more difficult situation.

This is the matchup where both players can be successful against each other and where both teams need that to happen every night. 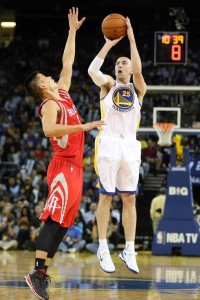 Stat To Chew On: R-ORACLE

The Warriors have a vaunted homecourt advantage. The crowd at ORACLE Arena in Oakland, Calif., is loud and boisterous. They made the Believe team of 2007 absolutely legendary. Teams are somwhat afraid of the effect this crowd can have especially when Golden State gets rolling.

Then again, the Playoffs are a different animal.

Atma Brother One of Golden State of Mind: It was indeed frustrating to see super star Stephen Curry get non-super star treatment from the refs. Those drives in the 3rd quarter where he got a lot of contact and ended up with no calls were surprising. Shoot even Steph was surprised and got an extremely rare technical foul.

Steve Perrin of Clips Nation: After losing Game 1 amid foul trouble for Blake Griffin and a blown call by the officials, the Clippers stormed back in Game 2 and humiliated the Warriors by 40 points. It was the largest margin of victory for the Clippers in the postseason in franchise history (by 15 points in fact). It was the largest margin of defeat in the postseason for the Warriors in over four decades. But even though the Clippers have a net advantage in the series of 36 points, it the games, split 1-1, that really matter. Then again, Game 1 felt like an outlier, and while the Clippers won’t win every game by 40, they certainly have the talent advantage in the series. Golden State mostly won on their defense during the regular season — and the Clippers just hung a buck thirty eight on them — in the playoffs.

Philip’s Running Prediction: I doubt we will see a game like Game Two again. Especially with Golden State coming home. At the same time, it felt like Game One was not quite what these teams are either. So we really have not seen these two teams playing at their best against each other. That is pretty tantalizing. No reason to change the prediction. The Warriors might win tonight, but it sure feels like the Clippers are the better team in the long run. Still Clippers in seven.