The NBA Playoffs continue at 8 p.m. on TNT as the Thunder host the Grizzlies, searching for a 2-0 lead in the Western Conference first round. Before each game, we will have a quick preview of the upcoming game with a matchup to watch and a stat to chew on as you watch the game.

The Thunder looked simply unstoppable for a good chunk of this game. Kevin Durant and Russell Westbrook got wherever they wanted on the floor and scored at will. They built that 25-point lead and it looked like they were ready to coast to victory.

The Grizzlies flipped that script with an incredible third quarter where they forced the Thunder into more jump shots, away from transition and into the isolation ball that the Thunder sometimes fall in love with. That 25-point lead was cut to two. Then Kevin Durant woke up and that was that.

It looked like the Grizzlies were trying to do much of the same things that led to their victory in last year’s series. They tried to bottle up the paint and keep Kevin Durant from scoring or getting easy looks. The key difference, of course, is that Westbrook is in this series.

Westbrook had 23 points and 10 rebounds to go with five assists and 19 field goal attempts. It was hardly a perfect game for the Thunder’s sparkplug of a point guard. Memphis needs to see the inefficient Westbrook of the second half more than the efficient one of the first.

That responsibility falls first on Mike Conley. Conley did a good job challenging Westbrook on the offensive end, scoring 16 points and dishing out 11 assists. But he too struggled with his shot and he is going to have to be smarter with his possessions to make Westbrook work on defense and make his job that much more tougher. 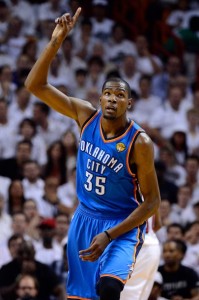 Stat to Chew on: Durant’s streak

Kevin Durant’s streak of games with at least 25 points or more ended, but he is still pouring it in with a 33-point performance against the Grizzlies in the first game of this series. Durant was sublime and was the key to putting this game (finally) away.

Durant scored 33 points, dished out seven assists and grabbed eight rebounds while shooting 13 for 25 from the floor. Memphis may not want to put him on the line a whole bunch, but the team will have to be more physical with him to end this hot streak and this offensive scoring onslaught Durant has put on these past few months.

Durant still has a long way to go to match his best streak of 25-point games in the Playoffs. He scored 25 points or more nine straight times in the Postseason during the 2013 Playoffs. Only the Game Five loss to the Grizzlies last year, where he had 21, stands between him and an even longer streak.

Royce Young of Daily Thunder: The Thunder played roughly 34 minutes of terrific, dynamic basketball, but a third quarter slip allowed the Grizzlies to not just get back in the game for a brief moment, but affirm to themselves that they can play with OKC.

Johnson Ko of Grizzly Bear Blues: There are currently only two teams in the NBA that forces Zbo into playing frazzled basketball, they are the Spurs and the Thunder. Ibaka and Collison were able to soak up all the physical contact dished out by Zach in the post, while being athletic enough to be right there to challenge Zbo’s shots every single time. This resulted in ill-disciplined shots, rushed shots, rushed tips, poor FT shooting and general ineffectiveness by Zbo overall. The Thunder were also able to bait Zach into several ticky-tack loose ball fouls which added to the frustration. Rather than doing things faster, Zach will instead need to slow things down, be more pedantic with his offensive moves, grab the loose balls instead of tipping them, and focus on the fact that he isn’t going to out-quick or out-jump anybody, he will need to out-compose his defenders in order to finish shots that he normally makes against everyone else.

Philip’s Running Prediction: I originally had the Thunder winning this series in a difficult six or seven games. There is nothing here to change that. Memphis got punched in the mouth hard and looked down on the mat. Then the Grizzlies roared back. Maybe they spent too much energy in that comeback. So there is no reason to think anything has changed. This will be a great series that has the Thunder in seven.