The NBA Playoffs continue at 1 p.m. on TNT as the Spurs host the Mavericks in the 1-8 matchup of the Western Conference. Before each game, we will have a quick preview of the upcoming game with a matchup to watch and a stat to chew on as you watch the game.

In this last meeting, Patty Mills stepped in for Tony Parker and scored 26 points. It clearly did not matter who was in the lineup, the Spurs just had the formula. Tim Duncan had 20 points and 15 rebounds. It was a beat down that the score, frankly, did not reflect. The Spurs just deconstructed the Mavericks. Dallas has its work cut out for them.

The point guard battle is going to be key throughout this series. Parker drives the bus for the Spurs and will be the central focus of the Mavericks defense. It is going to take more than one guy to handle Parker though because Jose Calderon is not necessarily known for his defense.

Calderon has a career defensive rating of 112 and that is the number he had this year for the Mavericks. Calderon is not a great defender and he will draw the first assignment on Parker. Shawn Marion likely will get Kawhi Leonard or Manu Ginobili, but he will switch on to Parker at times too. But when push comes to shove, Calderon is the guy that has to handle Parker. Good luck. 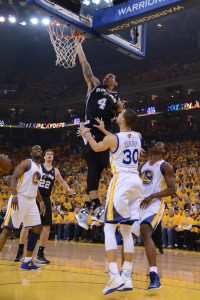 Stat to Chew on: Coming up Green

Danny Green could be in for a big series against the Mavericks if they do not change their defense on him. In four games this season, Green averaged only 12.3 points in 25.8 minutes per game. But it is how he got those points that should worry Dallas. Green made 60.0 percent of his 3-point attempts and was a +27.3 points per 100 possessions in the four games this year.

Sure, Green is playing with the starters, but how much is that going to change this time around? Not much. And in the Playoffs, those fourth and fifth options are the ones that open things up for the stars. Green has already shown he can make open jumpers when given to him and that could spell a whole lot of trouble for the Mavericks unless they stick someone to cover him at the 3-point line.

Jeff Garcia of Project Spurs: Defensively, Dallas will throw Jose Calderon, Monta Ellis, Devin Harris and Shawn Marion. All of who won’t likely stop Parker. Calderon has never been known for defense (but is deadly offensively if he starts hitting three-pointers), Ellis is one-dimensional and is a scorer, Marion is past his prime and Parker can run all over him which leave Harris as the Mavs only viable player to slow down Parker.

Josh Bowe of Mavs Moneyball: To me, that’s what Mavs-Spurs is. It’s a rivalry for all the right reasons — great basketball teams, easy to hate players on each side, great coaching and two cities from the same state, yet both distinct in their own way. It also turns you into a madman.

Philip’s Running Prediction: This is a really bad matchup for the Mavericks. San Antonio is a team that dials in and does not dial back. This is what the Spurs live and prepare for . The Mavericks have little answer for what the Spurs can do. The only reason I give the Mavericks a game is because of my respect for Dirk Nowitzki. The Spurs should win this easily in five.