They are here! The Playoffs are here!

The NBA Playoffs get started at 12:30 p.m. on ESPN as the Raptors host the Nets in the 3-6 matchup of the Eastern Conference. Before each game, we will have a quick preview of the upcoming game with a matchup to watch and a stat to chew on as you watch the game.

The Nets and Raptors played four extremely competitive games during the regular season. Three of the four games were decided by a total of seven points. All were played within one possession. The fourth game was a 96-80 victory for the Raptors at Air Canada Centre.

In the last game over at Barclays Center, Kyle Lowry turned in a near triple double with 21 points, eight rebounds and seven assists, but the Nets won the day with a continued strong effort as the season came to a close. Paul Pierce drained a 3-pointer late in the game that gave the Nets the necessary cushion and had 10 of his 15 points in the fourth quarter for Brooklyn to eke out the win.

Lowry should have been an All Star this year. If he did not have such a bad reputation around the league, he probably would have been. But in any case, Lowry has been fantastic all year as the driving force for this surprising Raptors team. He has given them a sense of toughness that they lacked before and has been the perfect piece for Dwayne Casey.

Deron Williams has lost his star status. Even with all the talent around him now, Williams has struggled to stay healthy and regain the status that had him whispered in the same breath as Chris Paul. The Nets have to see the good Deron Williams to advance deep in the Playoffs with no one quite sure what the Nets can get from Kevin Garnett on a night-to-night basis or even from Paul Pierce. 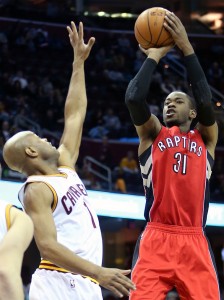 Stat to Chew On: Catch and Shoot

The Raptors have nine players who shoot better than 40 percent from beyond the 3-point line in catch and shoot situations, according to NBA.com’s player tracking stats. A catch and shoot situation is defined as any jumper beyond 10 feet where the player takes a shot within two seconds without taking a dribble. That effort is led by solid shooter Steve Novak, but surprisingly there are a lot of other regulars in there too.

So watch out for drives from Kyle Lowry and DeMar DeRozan and the dish out to the 3-point line. Toronto has a lot of shooters and can spread the floor. They also have guys who can both shoot and drive. The Raptors will test the Nets defense.

Josh Burton of Brooklyn Balling: Still, if the Nets were to lose–for the second season in a row–in the opening round of the postseason without advancing any further, it would be a major disappointment. General manager Billy King constructed the team with the highest payroll in league history this summer, and for it to fail to win a single playoff series would be worse than an embarrassment: It would be a nightmare.

Philip’s Running Prediction: I have the Raptors winning this series in seven games. These teams are very close and the Nets experience should show at some point. But the Raptors have too much athleticism and they have bought in defensively. Home court is the difference and I like the Raptors to advance out of the first round for just the second time in franchise history.