The NBA Playoffs continue at 10:30 p.m. on ESPN as the Trail Blazers host the Rockets looking to finish off their series in the Western Conference first round. Before each game, we will have a quick preview of the upcoming game with a matchup to watch and a stat to chew on as you watch the game.

It took James Harden a while to get going, but when he did it helped the Rockets stay alive in this series and really put the pressure on the Trail Blazers to finish the series off at home and avoid a Game 7. Portland was actually the last team to go down 3-0 and force a Game Seven. But more on that in a bit.

In this game it was Chandler Parsons getting things going early on and Dwight Howard pacing the Rockets through the rest of the game. Houston largely kept LaMarcus Aldridge in control and Damian Lillard struggled to make plays down the stretch as the Rockets finally pulled one out.

This Houston team was real close to being up 3-1 with all the overtime defeats. The Rockets are certainly a team capable of making this comeback.

This is a matchup I have been watching all series long. Parsons just feels like the wild card for this Rockets bunch. When he is playing well, Houston has a better chance of winning.

There really is no rhyme or reason to Parsons’ contributions to the Rockets in wins or losses. He has had 24 and 26 points in losses while his 20-point effort in the win earlier this week really stood out.

Batum is decidedly not a player who has stood out this postseason. He is averaging 17.2 points per game on 47.3 percent shooting. It is a really quiet 17 points per game that is. That is always how Batum has operated though. He is not incredibly flashy, but gets his work in and makes the plays his team needs from him.

They may need a bit more tonight against the Rockets especially with Parsons probably also needing another efficient and big game for the Rockets. 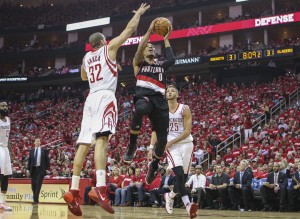 Stat to Chew On: On the comeback trail

Only three teams have ever forced a Game Seven after trailing 3-0 in the series. Houston aims to be number four tonight. It is obviously a very difficult thing to do. Especially considering the Rockets will have to do that on the road. But both these teams are evenly matched and Houston is not afraid of the Moda Center.

None of those three previous series were nearly as close as this one. The New York Knicks lost by 49 combined points to the Rochester Royals in the 1951 NBA Finals before storming back to force a Game Seven. They lost that by four points to cede the title.

Both Denver in 1994 (second round vs. Utah) and Portland in 2003 (first round vs. Dallas) were at home for Game Six after stealing Game Five on the road. That is not the case tonight. The Blazers certainly feel the pressure to close this one out tonight.

Rahat Huq/Red94: The difference last night was Jeremy Lin.  I don’t think it takes too much analysis to arrive at that conclusion.  Howard and Parsons, for the most part, repeated their series production; Harden too, while his point outputs have fluctuated, his overall efficiency (or lack thereof), has remained relatively consistent.  Jeremy Lin is the one other big gun on this team and aside from some stellar play in Game 1, he’s been relatively awful this series, before last night, with that point punctuated by some critical mental errors late in games.  The Rockets must have Mr. Lin active and engaged, especially when the other team is guarding him with a lesser defender.

Chris Lucia/Blazer’s Edge: Unlike the previous four games this postseason, Wednesday night’s contest never felt particularly close as the Rockets controlled the game from start to finish, including a 17-point lead in the second quarter. The Blazers got within a couple of points of Houston at times throughout the fourth period, but each time they threatened, the Rockets answered and eventually won the game by double digits.

Philip’s Running Prediction: This game will be close like every game in this series has been. So much though has to be right for the Rockets to win. Most of all James Harden. He has not been right this series. Wesley Matthews has done an incredible job. That defense remains the difference and why Portland has come out on top more often than not in these close games. It happens again as the Blazers advance in six.