The NBA Playoffs continue at 9:30 p.m. on TNT as the Rockets host the Trail Blazers in the 4-5 matchup of the Western Conference. Before each game, we will have a quick preview of the upcoming game with a matchup to watch and a stat to chew on as you watch the game.

Here is hoping Game One of this series is as entertaining as Houston’s 118-113 overtime win from early March. James Harden had 41 points and Jeremy Lin had 26 points as these two teams exchanged blows and went back and forth into the extra frame. Oh, and LaMarcus Aldridge had 28 points for the Blazers.

These two teams just feel like perfect foils for each other. Both do much of the same things and have the same kind of explosiveness on offense and determination on defense. They also are extremely flawed and among the West teams that could be title contenders with the right bounces and focus, but they are not quite all the way there. This is going to be fun.

Their arms go forever. Both of them. They are extremely athletic. Both of them. And they are going to either cancel each other out or one of them is going to decide this series.

Both Parsons and Batum are both capable of filling a stat sheet and taking advantage of the opportunities they create for themselves and the opportunities others create for them. Both have the physical skills to be solid defensively too. Someone is going to have to break through in this matchup and earn a victory for his team. These two guys could be the key to advancing. 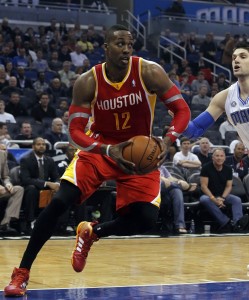 Stat to Chew on: Playoff Dwight

Dwight Howard for all his personal foibles and what-not steps his game up in the postseason. Starting with the 2008 Playoffs, his second Playoff appearance, Howard has put up insane numbers — getting 20/20s at ease it seems sometimes. It is no coincidence he was so key to the Magic’s run to the 2009 Finals.

Mitchell Felker of Red94: Neither team is especially good at forcing turnovers, and both are in the bottom-5 in TO ratio.  The Rockets were 23rd (13.4 per) in the league at causing turnovers, while the Blazers were dead last (11.6).  Portland, however, is much better at protecting the ball, finishing 6th (13.3 per) to Houston’s t-29th ranking (15.4).

Chris Lucia of Blazer’s Edge: Harden is going to be nearly impossible for Blazers coach Terry Stotts and his team to corral. Three-quarters of his scores against Portland this year came off the dribble, including almost half his threes. He doesn’t necessarily need the help of his teammates to create. Somehow, Harden also morphs from a decent outside shooter to a three-point sniper when facing the Blazers.

Philip’s Running Prediction: Like I said, I think both of these teams are very capable of competing to get deep in the West if they can put everything together. Neither was able to do that for the majority of the season. So these two teams feel very even and a pretty good match for each other. Dwight Howard remains a difference maker though. His ability to change the game defensively should give the Rockets the edge, albeit in seven.