The NBA Playoffs continue at 7 p.m. on TNT as the Bulls host the Wizards in the 4-5 matchup of the Eastern Conference. Before each game, we will have a quick preview of the upcoming game with a matchup to watch and a stat to chew on as you watch the game.

The Wizards actually won the season series 2-1, but the loss was a brutal one in April at Verizon Center. The Bulls won 96-78 and served some form of notice for the rest of this series.

Joakim Noah scored 21 points and grabbed 12 rebounds and D.J. Augustin scored 25 points off the bench for the Bulls in the rout. What was more impressive was Chicago holding Washington to 39.5 percent field goal shooting and just 12 free throw attempts. That is some defense. So too is winning a game by 18 points on 39 percent shooting yourself. Chicago is an experienced Playoff team that knows how to dial in for these games.

Wall is an incredibly interesting force at point guard. His speed is unparalleled in the NBA. So how do you slow that down Kirk Hinrich? Hinrich probably cannot and the rest of the Bulls defense will have to step up and slow Wall down. If any defense can, it is Chicago’s. But the initial assignment goes to Hinrich.

Slowing down Wall is really the big key to stopping the Wizards offense. And it starts on preventing fast breaks. There is not a better player at a full sprint than John Wall. A solid offensive effort and Hinrich leaking back on defense (and praying) will help the Bulls contain and slow down this matchup. 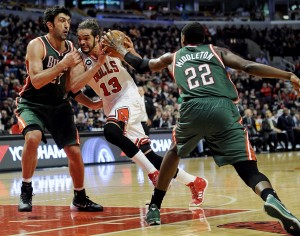 How rare is the season Joakim Noah just completed? His 12.6 points, 11.3 rebounds and 5.4 assists per game put him in rare territory, especially for big men. In NBA history, only 35 players have averaged 10 points, 10 rebounds and five assists per game. The last player to do it was Kevin Garnett in 2005. The luminaries among that 35 include Garnett, Charles Barkley, Larry Bird (five times) and Wilt Chamberlain. That puts Noah in some elite company.

As for his triple doubles, his four triple doubles were the most in a single season for a center since Chris Webber in 2004-05. Noah turned in some incredible statistical numbers this season to put himself in the MVP conversation.

Ricky O’Donnell of Blog-a-Bull: On the surface, this year’s Bulls team shares a lot in common with last year’s squad, the one that reached the second round of the playoffs before LeBron James and the Heat ran off four consecutive wins to end their season. No Derrick. Cheap signings saving the day, from Marco and Nate to D.J. and Dunleavy. The defense is great and the offense is among the worst in the league. This team won three more games than last year’s squad, and again no one is quite sure how they’ve managed to do it.

Thomas Pruitt of Bullets Forever: My heart says Washington, my head says Chicago. Yes, the Bulls are on paper the better team, and it would be foolish to discount their recent success. At the same time, Washington, with their shooting and ball movement, matches up very well with them. At the end of the day, I think that the Wizards are going to come out firing and we’re going to see a big game from Bradley Beal as the Wizards steal the opener.

Philip’s Running Prediction: I believe wholeheartedly that Chicago is likely the better team. They have experience and a defense that can choke out any opponent. The Wizards are still a very young team. This is the one area where I think experience really will matter. At the same time, I do not feel Chicago has the offense to blow out any team. So this should be a very competitive series. I still have to go Bulls in six to start off with. This one is subject to change.