The talk coming out of Sunday’s surprising Game Four win for the Clippers with the eye toward Game Five is Chris Paul’s defense on Kevin Durant. How could the 6-foot-9 Kevin Durant get stopped by the 6-foot Chris Paul?

The answer is not that simple. Paul had that nice swipe of Durant at the top of the key that led to an easy layup. But most of the work came from some great defense and help-side defense from the Clippers and some awful spacing for the Thunder. And Oklahoma City continually went to the well for the same awful play design and the same awful result.

Here is the typical setup from the fourth quarter of Game Four on Sunday: 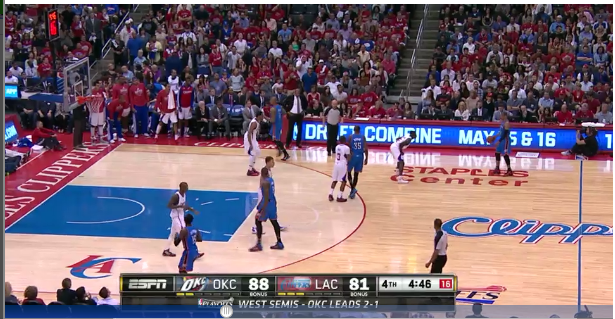 It starts off as a basic 1-4 high set. Reggie Jackson and Caron Butler take the wings with Serge Ibaka and Kevin Durant at the elbows. Durant is a little higher than normal and he is about to run a high screen and roll with Russell Westbrook. That is typically a very dangerous play because of what both can do and it makes the smaller Chris Paul and Darren Collison make interesting decisions.

Only, Durant and Westbrook only half-heartedly go through that screen and roll. Durant barely sets a screen and Danny Granger easily corrals any potential roll to the basket while Russell Westbrook drives to the top of the key without any change in his defense. Paul quickly recovers. 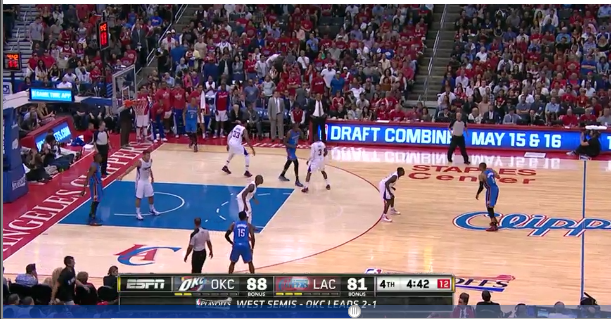 The thing to notice is that the ball never moves from one side of the floor to the other and we are already halfway through the shot clock. Even with a seven-point lead, Oklahoma City needs to run its offense. Making things difficult is the Thunder’s inability to space the floor. Granger can easily recover to Butler in the corner because Butler is not much of a driving threat and Jamal Crawford can easily cover the paint and help Collison should Westbrook decide to drive. Reggie Jackson is not much of a 3-point threat either — 33.9 percent this season. So the Clippers stay at home.

The Thunder decide to run the play again.

Durant actually slips the screen but it is a half-hearted screen and does little to impede either Collison or Paul. There is very little driving room for Westbrook. He is thinking of attacking the middle but the way is shut because the Clippers defense almost completely ignores Jackson on the wing to double Durant on the roll and Caron Butler is still trying to clear out of the corner and get to the other side of the floor to give Westbrook space to operate. As you can see DeAndre Jordan and Blake Griffin both are capable of covering the baseline to shut off Westbrook (who would have to go left to get to the basket anyway). 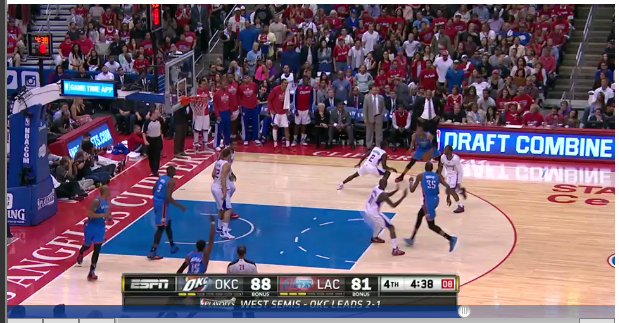 So what does Westbrook do? He opts not to drive and kicks it to Durant who does a standard UCLA cut to pop back out at the top of the key. By then Paul has recovered and Durant has seven seconds to work. Crawford stays close at around the elbow area, cutting off that driving lane.

Durant drives right after receiving the ball as Crawford is rotating back out to Jackson.

There is very little, if any, open space for Durant to drive to and absolutely no one open for him to pass. Even with five seconds remaining on the shot clock, Durant is forced to put up this hurried shot which misses.

The thing to notice though is the decision by Durant to drive into the teeth of the defense. Jackson is so close to Durant that Crawford is able to pressure Durant from behind as well. That makes the shot that much more difficult.

A few plays later came that great Darren Collison steal and dunk which gave the Clippers their first lead. The Thunder run virtually the same play and their poor spacing helped contribute to the turnover.

Here (the play is about a minute into the video if it does not start at the right time), they try the 1-4 pick and roll with Westbrook and Durant again. Durant halfheartedly sets the screen and posts up at the elbow. He does it from a stand still which makes it easier for Paul to poke him off his spot and pressure him some. He does not have a screen set for him to get him space. 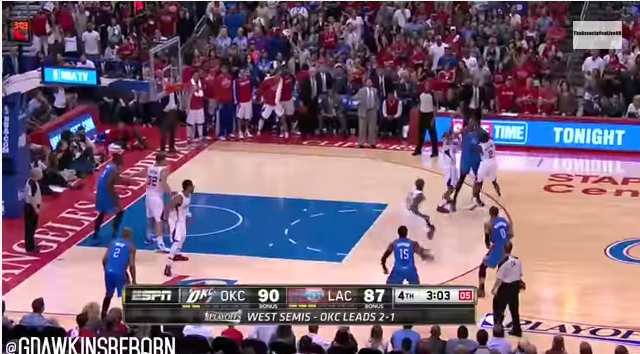 Westbrook feeds it to him and retreats to the other side of the floor. This is where the problem is. Westbrook and Jackson are in the same spot, enabling Crawford to in effect defend both of them as Collison leaves Westbrook to double. Someone needed to cut to that open corner to give Durant multiple outlets if this exact situation happened. Durant has no outlets here and nobody moves to get open.

So Durant attempts to throw it to Jackson, but Crawford easily defends it. If Jackson is closer to Butler, Crawford would be guarding Westbrook tighter giving Durant maybe a sliver of a driving lane and a path to make a pass out of the double team. That did not come however and Crawford stole the ball, found Collison and the Clippers won the game.

Miami tried a similar set to get Chris Bosh a 3-pointer in its Game Four win, using Dwyane Wade and LeBron James in the pick and roll.

Here, James gets a good rub screen and Paul Pierce goes with Wade to double the ball handler. Unlike Durant, James rolls hard and aggressively into the paint rather than standing still and posting up at the elbow. The Heat also are better able to stretch the floor with Ray Allen cutting to the wing to keep the defense occupied and Chris Bosh pulling Kevin Garnett to the corner while Mario Chalmers cuts through the lane to pop back out on the perimeter.

All this is happening while Wade makes the pass. LeBron James catches the ball with two feet in the paint and the defense collapsing around him. That is exactly what he wants. He has options: 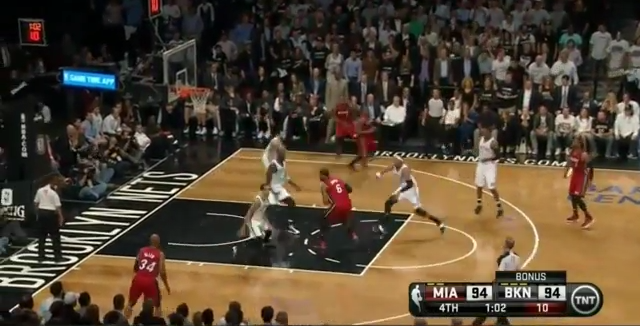 Pierce is trailing behind him, Garnett is in front of him, Livingston is in the paint in no man’s land between going for James and respecting Allen and Deron Williams is the low man in what amounts to a 2-3 zone, chasing Chalmers.

James takes one dribble and draws both Garnett and Pierce to him as Livingston recovers on Allen. Williams makes the right play and stays low to guard against Bosh in the corner. So James kicks it out to Chalmers who fires it quickly to Bosh as Williams tries to recover.

The rest is a Bosh 3-pointer that pretty much won the game. The defense simply cannot rotate fast enough.

That is the key difference between these end-of-game sets from the Thunder and Heat. The Heat can space the floor and cause the defense to think opening up space. At the end of the game Sunday, the Clippers were able to overload Durant and force him into difficult shots and bad passes. They struggled with that Tuesday as they allowed the Thunder to get out in transition and wreak havoc in the paint with Russell Westbrook. The game was not slowed down into a half-court game where Oklahoma City can really struggle.

Reggie Jackson, Caron Butler and Serge Ibaka have to make jumpers to release some pressure from Durant and Westbrook. And the two stars have to trust they can do this at the end of games.