Oftentimes in the NBA, players make dumb and controversial statements. Across all professional sports, that is the case and when players do say things that are ill-advised, coaches and executives are the people that have to backtrack those remarks and save face. Rarely, if ever, is it the coach saying something stupid, especially about a player.

Well, veteran coach Rick Carlisle of the Dallas Mavericks made waves a few days ago when he criticized prized free-agent acquisition Chandler Parsons — who went over to the Mavs from the divisional rival Houston Rockets — for being overweight heading into the preseason.

After a loss on Friday to the Thunder, the coach said that it appeared as if Parsons’ weight added in the offseason hindered him on the court. Obviously the star player did not take too kindly to that, jabbing back at his coach with a shirtless Instagram post showing off his physique.

Okay, maybe Parsons has let bygones be bygones at this point and has forgiven Carlisle for surprising and out-of-character comment. A few days after, he clarified himself, saying that he was in the wrong, putting the incident behind the two for good (hopefully, for Dallas).

But, that still does not mean he did not make a mistake that should teach him — and other coaches, in any sport, for that matter — to watch their mouths. Coaches are not above the proverbial law of sports in terms of what they do off the court, and many times, this fact is overlooked, which is unfair to players. 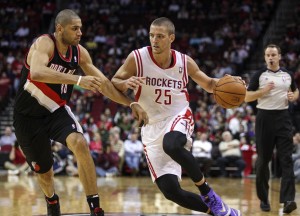 Chandler Parsons put on a little weight this summer. Is Rick Carlisle unhappy about this?

Even though he passed it off as a joke, Parsons was undoubtedly a little hurt and bewildered by having his weight pointed out by his coach as a reason for one bad game, which was in the preseason nonetheless. Maybe if Parsons did not do well in a regular season or postseason game — and his conditioning was clearly to blame — then Carlisle could get a pass.

That was not the case, though, and who knows if this will affect the relationship between the two going forward, as Parsons has not even appeared in a game that counts for the Mavericks yet. It should serve as a reminder to Carlisle and others around the NBA to think about what they say before they say it.

If it means anything else, Parsons said he does expect to lose weight during the season. Guess we will have to play and find out.