Once again, Jeremy Lin is finding himself getting pushed out of town by Carmelo Anthony.

As the Rockets have wined and dined Carmelo Anthony on Wednesday, they posted gigantic billboards in and around Toyota Center with Anthony in a Rockets uniform:

The Rockets will host Carmelo Anthony and have pictures of Carmelo in Rockets uniforms on Toyota Center marquis pic.twitter.com/2VfycvqlkN

There is only one problem with that. Jeremy Lin already wears number seven for the Rockets. And he is still on the roster.

I guess Carmelo Anthony could return to wearing No. 15, but the Rockets have already put on this big show-stopping number — including picking Anthony up in a limo and having him meet with all the Rockets luminaries including Dwight Howard — with Anthony wearing No. 7.

Then you get into the history between the two. 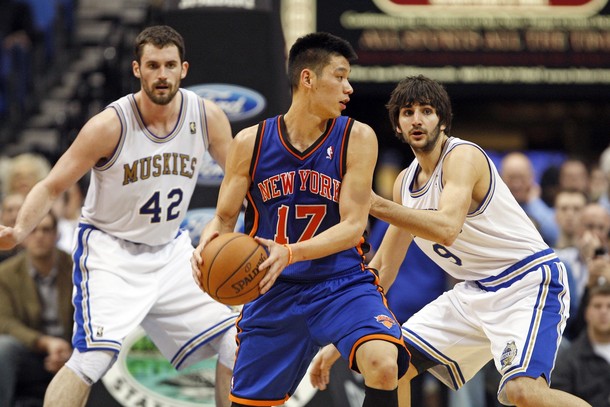 As Lin-sanity was picking up in New York while Anthony was hurt, there were plenty of reports that Anthony was perturbed by the love the Madison Square Garden faithful showed him over Anthony. Lin electrified the Garden and became a phenomenon. Most of all though, he did it his own way, proving to be a capable point guard for Mike D’Antoni. He was everything Anthony seemed not to be. And he was certainly not part of Anthony’s inner circle or the kind of player and person Anthony envisioned having around him.

This is unintentional on the Rockets part. They probably did not mean to dredge up all this history and handing Anthony Lin’s number was a marketing oversight not a slight against Lin.

Lin, as always, takes things in stride — not sweating the little things (he could always switch jersey numbers anyway, right?).

Luke 6:29 – If someone slaps you on one cheek, turn to them the other also. If someone takes your coat, do not withhold your shirt from them

The Rockets likely will have to trade away Lin and his nearly $8 million cap hit to get far enough under the cap to sign Anthony anyway. So the issue of his number quickly becomes a moot point.

Still, not a good look to ignore a player on your roster like this.