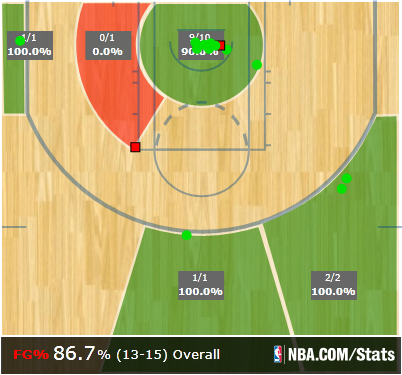 The San Antonio Spurs set an NBA Finals record by shooting 13 for 15, 86.7 percent, in the first quarter of Tuesday’s Game Three. That totaled 41 points, including this crazy 3-pointer from Manu Ginobili to end the quarter.

As you can see from the shot chart, the Spurs did a lot of their damage right in the paint — 10 of 15 shots at the rim. The Heat defense was opened up by the passing and hot shooting from beyond the arc. San Antonio just put on a clinic.

Just an incredible offensive display. And it has not stopped heading into the second quarter.