Outside of the fact that they are both highly successful NBA teams in the 2014 NBA Finals, there are not many similarities between the San Antonio Spurs and the Miami Heat.

The Spurs, led by the steely and ruthlessly smart Gregg Popovich, have long been a bastion of NBA success, winning four championships since 1999. The last three have come with their main core — Tim Duncan, Manu Ginobili and Tony Parker — whom the Spurs originally drafted and who have not played for a NBA team other than the Spurs.

The systematic construction of this elite team has been set up both by Popovich, who used to serve as San Antonio’s general manager, and R.C. Buford, who is the current GM. In 1997, Duncan was drafted with the the first overall pick out of Wake Forest. In 1999, Ginobili was taken in the second round out of his native Argentina and, finally in 2001, Parker was picked 28th overall out of France, where he was raised.

So, basically, every two years from 1997-2001, the Spurs drafted a future All-Star (not to mention potential hall of famer) who would go on to become a crucial member of their title-winning franchise. Not many general managers and coaches can proclaim that kind of success.

On the other hand, the Heat have built their winning roster through free agency mostly. Dwyane Wade was taken fifth overall by Miami in 2003 and has been with the Heat since. However, infamously, both LeBron James and Chris Bosh signed with the team in the offseason of 2010 after leaving the only franchises that drafted them (the Cavaliers and Raptors respectively).

This is what The Spurs vs The Heat is about. pic.twitter.com/snejaLwKb9

The builder of Miami’s formidable core is Pat Riley, who had experience with stars in his coaching tenures with the Lakers and Knicks. Riley has been team president of the Heat since 1995 and has also served as coach and general manager on-and-off for most of the seasons since then.

Buford’s team-building method utilized the draft as its main weapon, just like how the great teams of the pre-free agency era did. Even after free agency was created for the NBA in 1976, most star-laden teams of the era — the Jordan Bulls and Magic Johnson Lakers included — kept the elite players they drafted, and when they did not, said stars left via trade, not free agency, in most cases.

The Heat’s system could not be more different, as in the summer of 2010, they made one of the NBA’s first free-agent superteams by re-signing Wade and picking up both Bosh and James once their rookie contracts expired. 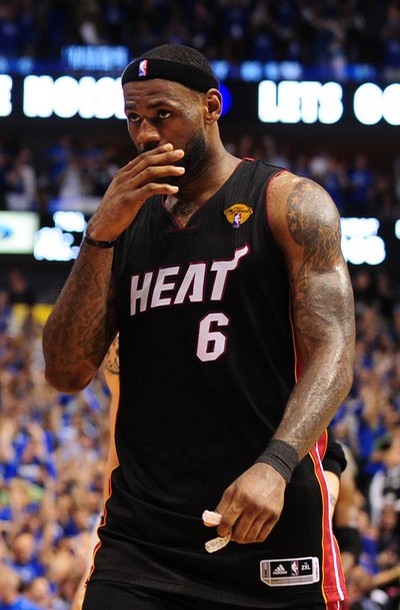 Especially with LeBron’s “The Decision” special announcing his new team, there was much derision for Pat Riley’s method amid concerns of salary cap manipulation with all three Heat studs taking less money to make the offseason moves fit under the cap.

Regardless of which team construction method you prefer, there is no denying that both systems have worked incredibly well for both the Spurs and the Heat. Miami prevailed, though, last season when they won the thrilling seven-game Finals from San Antonio. However, here in 2014, old versus new clashes yet again.

San Antonio is the old-age group of wily veterans who just seem to be smarter than most players they go up against. Put together via traditional means, the Spurs are the favorites of the older NBA, where loyalty to a team was just as paramount as setting the right screen or drawing a charge at a crucial point in a game.

Miami is the new-age squad of uber-athletic players who can take over almost any game when they get into the right mindset, as they are very hard to defend and score on. Free agency and some salary fixing got this bunch in Miami, but Wade, Bosh and LeBron could easily be doing this in Cleveland, Toronto or even Milwaukee had those been the locales the three agreed upon. That is why traditionalists revile them so much while younger fans and commentators laud them — their laundry does not matter, just the winning.

Now, if the Spurs win, it does not mean that the only effective way to compile a NBA roster is through the draft, vice versa if the Heat win.

There is no one magical and secret formula to construct a championship team. Key players on San Antonio such as Marco Belinelli (free agent), Boris Diaw (free agent), Danny Green (D-League call-up), and Kawhi Leonard (draft day trade) were all obtained by the Spurs without being drafted by them. They needed smart free agency to supplement their savvy drafting.

However, the true “best” way to build a title contender is through a mixture of the draft, free agency, trades, and even the D-League, which has been used more and more by teams in recent years. There is no absolute with roster strategy and neither Buford nor Riley is totally “right.”

Still, the matchup in this season’s Finals does provide an interesting comparison between two completely different ways to acquire players for an elite NBA team. It also demonstrates that just because a team is old, like the Spurs, does not mean it has no shot against a younger Heat team.

It may make the challenge more difficult, but that has not stopped San Antonio before, so why should it now?