It is better to have loved Love than to have never loved Love at all.

Of course, it is a lot harder for more than five million Minnesotans to rest peacefully at night knowing their beloved Timberwolves, who have not been to the playoffs since 2004, are back on track to defend their title of longest post-season drought.

Nearly 10 years after Kevin Garnett pulled the playoff parachute and booked it for Beantown, Kevin Love orchestrated his own exit and landed next to the king of Lake Erie.

All the jibber jabber and cooler conversations have orbited the new-look Cleveland Cavaliers for the past month or so. I am here to tend to the “wounded” franchise that emerged Love-less.

The T-Wolves are bad. There is no use dancing around the obvious. We might as well have Ricky Rubio no-look a pass at the elephant in the room and hope he can finish at the bucket like Love did.

But there is more story to be written here for the T-Wolves.

It starts with Rubio. With three seasons under his belt, the 23-year-old point guard is finally going to lead the pack – pun, most certainly, intended.

The guy averaged 9.5 points and 8.6 assists last year with a lottery-laden team. Rubio only took 133 shots from beyond the arc, but at least he hit about 33 percent of them. 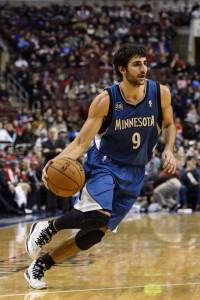 Without Kevin Love, the brunt of the attention in Minnesota falls on Ricky Rubio. Photo by Howard Smith-USA TODAY Sports

At 23, he is fine. There is plenty of time to improve. Remember when Jason Kidd entered the league? If he had aimed to spill a cup of water on the court then, it would have ended up in the lap of some blonde in the fifth row – point being he could not shoot.

The same could be said for Tony Parker and Rajon Rondo, who still isn’t the most reliable shooter.

Rubio’s defense may be suspect, but a lot of point guards are liabilities on the defensive end of the court. He can be helped out with certain defensive schemes to hide weaknesses.

It is a team game, after all.

And, speaking of team, here is where we dive into the rest of Rubio’s squad.

Nikola Pekovic has an opportunity to expand his role and skills now that he has lost his paint partner. He averaged about 17 points and about nine rebounds per game last season. Yes, he only played in 54 games, but at 28, he is entering his prime now. The only reason why he is not being mentioned as a top-10 center, which I truly believe he is, is because he plays in Minnesota.

Pairing Pekovic with Thaddeus Young, who actually provides more defense than his predecessor, could work out nicely. Young posted about 18 points and six rebounds per game last year with a struggling Philadelphia 76ers team. Plus, he is 25 years old, and he has been quite durable so far in his career. In fact, since he became a full-time starter in the 2012-2013 season, he has only missed nine total games.

Now comes the fun part of the conversation.

Has anyone gotten a chance to dub Zach LaVine and Andrew Wiggins with any sort of outrageous nickname? Honestly, I’ve barely heard any chatter about the two.

Picture this: Wiggins gets a defensive rebound and outlets to Rubio, who splits two defenders and tosses a no-look alley to LaVine for a high-rising slam.

Showtime in the Twin City will be a thing. 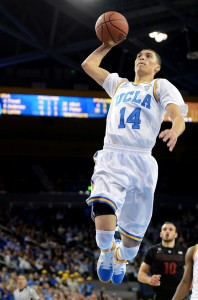 Not only can Andrew Wiggins fly, but Wolves first rounder Zach LaVine is also a gifted leaper. Photo by Jayne Kamin-Oncea-USA TODAY Sports

LaVine and Wiggins have freakish athletic ability, and in case you missed that, be kind and rewind to think about that one more time. LaVine and Wiggins are utterly weightless in the gym. Allow me to take a moment to knight the two of them the “Minneapolis Monstars.”

They might not see many wins out of the gate, but they sure will be brilliant to watch in the air.

This year will absolutely be another season ending in April for the T-Wolves. The Playoff-less streak will continue.

But there is a bigger picture. The nucleus is strong and filled with potential.

Realistically, Minnesota is a lottery pick away from making the playoffs. It could be a Jahlil Okafor or a Karl Towns Jr, who makes the difference.

We will not know until next summer.

Just do not lose sight of what is truly important here, Minnesotans. Beautiful things need time to grow – most of the time. If LaVine and Wiggins blossom into something more than a Twin City trapeze act, basketball in Minnesota might be fun again.

And here is one more pun for the road because I care: when it comes to the T-Wolves’ future, what does Love got to do, got to do with it?