On Thursday afternoon, in their semifinal game of the 2014 FIBA World Cup, Team USA destroyed Lithuania — with current NBAers Donatas Motiejunas and Jonas Valanciunas — by the score of 96-68 in yet another easy victory, the US’s eighth of the tournament. Kyrie Irving led the way with 18 points while James Harden and Klay Thompson contributed 16 apiece.

Meanwhile, the day before, in the quarterfinals, France stunned home favorite Spain, knocking the US’s biggest, and some say only, challenge right out. This set up a semifinal between Serbia and France, a game which is to take place Friday afternoon in Madrid.

Unfortunately, a potential Spain-US final would have been an amazing way to conclude an amazing tournament, but in that situation, a US win would be much less certain that it is in reality. 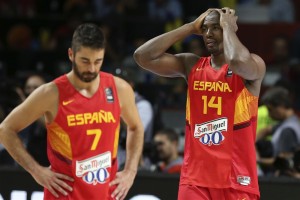 Instead of having the option to lose “honorably” against a top-notch Spaniard squad, Team USA’s final on Sunday afternoon is a complete must-win. You could reason a defeat at the hands of the Spanish team in front of a raucous crowd of Spanish fans in Madrid with notable NBA players Serge Ibaka, Pau Gasol, and Marc Gasol among others. But a loss to France without Tony Parker or to Serbia? That would be unacceptable.

No pressure or anything, of course.

Even though the best American players from the league are not participating in FIBA this year — namely LeBron James, Dwyane Wade, Paul George, Kevin Love, Kobe Bryant, to name a few — enough stars are present to make the Americans, by far, the most talented team remaining.

It is not the Olympics, but the FIBA World Cup is still an internationally known way for the US to exert its basketball dominance over the rest of the world, even as the sport becomes more popular abroad than it has ever been before. The U.S. has dominated international competitions since finishing third in the 2006 World Championships. They do not want to let go of the mantle.

Simply, regardless of whether its Serbia and Nenad Krstic or France and Boris Diaw that they end up facing in the championship game, the US has to bring home a title, and do it convincingly, to build some momentum for the 2016 Summer Olympics and represent our nation to the fullest extent.