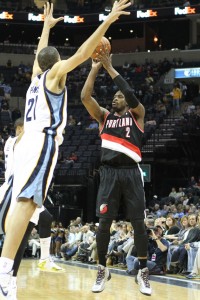 “If we were trying to get a sense for how stable three point percentage is after 100 attempts, a simple way to do it would be to randomly split the 100 shots into two samples of 50 and compare the percentage made in both samples. If it were stable, the percentage of makes in each sample should be similar. A better method would be to split the 100 shots into every permutation of two sample pairs of 50 and calculate the average correlation between the two pairs. This is what the Kuder-Richardson Formula 21 calculates. From here on I will refer to this number as the reliability. To find the point at which three-point shooting stabilizes we need to find out when the reliability crosses a certain threshold. A reliability of 0.7 seems to be the standard threshold used. After this point, the skill aspect will outweigh the noise.

“To gather a big enough sample of players with a sufficient number of attempts, I used the past seven season’s worth of three-point shooting data from NBA.com and I found that after roughly 750 attempts the reliability crosses the 0.7 threshold.”