Hoops Habit thought it would be cool to put out a list of under-25 guys to watch this season. Well, I decided it would be even cooler to make a list of top-10 guys meeting that one specification. There will be some guys you expect to see on this list like Lance Stephenson and Anthony Davis, but there might also be some surprises. You’ll have to read to find out.

The Unibrow is already garnering MVP talk and can definitely become the face of the league after Kevin Durant and LeBron James start to decline. He’s going to do freaky athletic, long arm things like he does in this awesome dunk compilation. His mid-range game is expanding and he even hit some threes in FIBA competition so we might see some more of that as well. What I really want to see is his post game improve this year with the weight he’s put on in the offseason.

Sir Lance-a-lot is an obvious choice here because he will now get to play on a team that should have some semblance of offense. Look for his scoring to go up and rebounding to go down because he had to do that out of necessity. He won’t need to worry about boards with Al Jefferson, Cody Zeller, Bismack Biyombo, and Noah Vonleh trying to grab all of them. He can be more worried about messing with LeBron or dunk ‘n’ dancing, which are really the main reasons to go watch him. 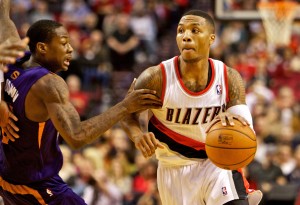 There is only clip you need here to understand why Damian Lillard will be worth the watch this year. THE BUZZER BEATER.  He is clutch, poised, and ready to lead this team to a place it hasn’t seen since 1977 – the championship. The kid does it all and it is going to be fun watching him become an elite point guard in the next couple years.

Everyone overlooks Drummond either because he plays in Detroit or because they are too busy giving Greg Monroe all the praise. Well, now it is his time to shine and he’s finally going to blossom because Stan Van Gundy is running the show in the Motor City. Van Gundy is going to put Drummond in a position to succeed and be an even more dominant force than he has been in his first two seasons. He will have the chance to stuff Melo again and do other awesome defensive things like Ben Wallace used to do.

Hayward just got a mega contract worth about $63 million over four years even though some of his numbers were low last season. He was improperly used though and had a ridiculous usage rate of 23.1 percentand that number should go down this year with Burke & Burks (Trey and Alec respectively) in action coupled with the drafting of Australian point guard Dante Exum. Hayward is going to be out to prove he deserves that contract and it’s going to be good television, even if the rest of the team won’t be any good.

His numbers were not incredibly strong last season, but that is because Boston was terrible and coach Brad Stevens was asking him to do just about everything. He was a forward, a center, a stretch 4, came off the bench, and was asked to play in the post. This year with a more defined role and Rajon Rondo back, Sully should be able to better his three-point shooting (and get it up from 27% last season) now that he knows he will have more freedom to take that shot.

Vucci Mane has always been under appreciated, but I am here to tell you to watch his games this year! He is going to be the only guy rebounding consistently on a fairly bad team and he will be counted on to score in the post…a lot. Grab him in your fantasy leagues in that mid round range because he will be a steal.

His points per game might go down this season, but you can expect everything to go up since he will not be the entire offense for the Cavaliers. He is going to be passing to guys like LeBron James, Kevin Love, Shawn Marion, an improved Dion Waiters, and Tristan Thompson so his assist numbers will look great and since he won’t have as much shooting pressure, his percentages will go up as well. Expect greatness and an Uncle Drew sequel because everyone wants it and if you don’t, then you don’t actually love life.

BOOGIE! You know he had to make this list. There was no avoiding it and you knew it. He’s still playing on a terrible Sacramento team and he’s going to be ALL the offense. You also have to watch him for his antics because that is what makes him so entertaining! Just let some BOOGIE into your heart, you won’t regret it.

I had to put him on this list because he’s going to be carrying the Wizards until Bradley Beal gets back. His mid-range game and decision making have improved each year he’s been in the league and coach Randy Wittman is the guy who’s been a big part of that. Wall is going to be an All-Star again this season and he might do it putting up even better numbers than last year.

A University of Florida grad, Ben likes basketball way more than he should. He gets excited about a Timberwolves-Kings game so that should tell you how intense the passion is for him. His favorite teams are the Spurs and Magic because he likes to be on both ends of the winning spectrum.