No, the two conference semifinal series that shifted scenes (and control) Friday night are not over. A 2-1 best-of-seven series is not a done deal. Moreover, too many plot twists have littered these NBA playoffs; offering a final verdict on a 2-1 series is plainly premature.

If history tells us anything in the NBA, the Oklahoma City Thunder and Indiana Pacers probably turned the corner in their respective series on Friday. The Los Angeles Clippers and Washington Wizards will get a chance to reshape the trajectory of these protracted battles in Game 4 pressure cookers, and they deserve the right to be heard. However, the Clips and the Wiz are now swimming against the tide of the NBA’s existence.

Go through the history of the NBA, especially over the past 40 years. Once in a while, you’ll encounter an instance in which a relative newbie managed to upset a more seasoned favorite, thereby shattering the conventional wisdom. For the most part, though, the NBA is a league in which teams must generally experience some postseason pain before they gain the glory. No other professional sports league in the United States offers quite the same dynamic, at least not to the same extent.

If you’re at least 40 years of age — old enough, therefore, to have grown up with the NBA in the late 1970s and early 1980s — you’ve seen the laws of the NBA jungle at work over an extended period of time.

The Seattle Supersonics lost to the Washington Bullets in the 1978 NBA Finals. They defeated the Bullets the next year to win the title. The Los Angeles Lakers beat the Philadelphia 76ers in two NBA Finals (1980 and 1982) before Dr. J turned the tables in 1983. The Celtics maintained their mastery of the Lakers over the long run of history in 1984. The Lakers had to stare down that green demon in 1985 and win a world title in Boston Garden.

The Celtics fought off the Detroit Pistons in 1987. Detroit had to absorb that defeat and process what it meant before besting Boston in 1988. The Pistons’ relationship to the Celtics in 1987 and ’88 mirrored their relationship to the Lakers in the 1988 and 1989 NBA Finals. The Chicago Bulls had to lose to Detroit before they could… hire Phil Jackson… and, of course, beat the Pistons handily in 1991.

You see how this works. It is how the NBA generally operates. In recent years, the law of the NBA jungle has remained firmly in place.

Even LeBron James, as talented as he was, had to lose in the NBA Finals — and not once, but twice! — before learning how to fully own the moment in June. Even Kevin Durant and Russell Westbrook could not impose their talent on an opponent in the 2012 Finals. They’re still in search of that first title. The Indiana Pacers took the Miami Heat to the limit… but they weren’t quite ready to finish the job in a Game 7 when everything fell apart for them.

This brings us to the present moment and Friday’s revealing pair of 1-1 Game 3s in the nation’s capital city and the nation’s plastic-surgery capital.

The notion of playoff experience is overrated. Plenty of teams return to the playoffs year after year without ever reaching their intended goal: the Atlanta Hawks in any decade; the early-1990s Cleveland Cavaliers; the Utah Jazz; the late-1990s Portland Trail Blazers; the 1990s Orlando Magic; the post-Chuck Daly, non-Larry Brown Detroit Pistons; the 1990s New York Knicks; the Denver Nuggets in any decade. Just because you’re there doesn’t mean you’re going to be better the next time around.

No, the NBA requires something more than mere “experience.” The Association rewards those teams that lose at a high level — painfully, in the latter stages of the playoffs, against elite competition — and therefore know exactly what is needed to take the next step. The NBA rewards teams willing to walk over the hot coals of pain and pressure, the teams that can feel the weight of failure crashing upon them but are able to calmly move forward in the face of such a realization.

In Friday, with two series feeling very much up in the air, Oklahoma City and Indiana lent powerful affirmation to the notion that they are ready to walk over some hot coals in the coming days and weeks.

The most striking aspect of Oklahoma City’s win over the Clippers in Los Angeles was that the Thunder brought a team to the court, whereas the Clips had their two superstars and nobody else. Oh, sure, Jamal Crawford scored 20 for Los Angeles, but that hollow total was the product of a 6-of-18 shooting performance, with key misses littering the stat sheet in the telltale fourth quarter. Matt Barnes, another veteran player with plenty of playoff experience, missed key shots late in the game, as the Thunder dared every non-Chris Paul, non-Blake Griffin Clipper to beat them. The Clippers have plenty of players with “playoff experience,” but Los Angeles has not gone through that rite of passage in the NBA, losing a memorably tough series in the conference or league finals. It’s not that OKC has more “experience” in general. It’s that the Thunder have suffered more in the past; they possessed an urgency which the Clippers couldn’t call forth, even with Doc Rivers (outcoached by Scott Brooks, by the way…) on their bench.

If Game 3 turned on the performances of two role players, it turned on the basis of what Caron Butler did… and what J.J. Redick didn’t do. Both men have plenty of experience, and Redick actually helped the Orlando Magic reach the 2009 NBA Finals. Yet, in crunch time of this game, Butler was the one pumping in three-pointers (finishing with 14 points) while Redick sat on the pine (finishing with 5 points). Butler lent the Thunder the difference-making presence that Redick was supposed to offer the Clippers. That, in many ways, gets to the heart of why the Thunder have forced the Clippers into a must-win situation on Sunday in Game 4. Los Angeles might be ridiculously talented, but the likes of Redick and DeAndre Jordan were bystanders in the face of a more focused performance from the likes of Butler and Serge Ibaka on a night when the four superstars — KD, Russ, CP3, and Blake — all dazzled and largely canceled each other out. 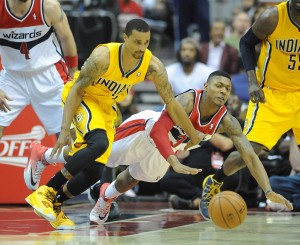 George Hill, not just Roy Hibbert, had to be a lot better for Indiana to win this series against Washington. Hill and Hibbert have both answered the call, even though Indiana’s offense is still not where it needs to be. Effort goes a long way, as the Pacers are re-learning at the moment.

For the Indiana Pacers, victory did not emerge with all that much difficulty on Friday night. The Washington Wizards laid an egg, and not just because their youthful backcourt of John Wall and Bradley Beal stunk up the joint. The Wizards’ veterans, chiefly Nene Hilario (3-of-14 field goals, 2-of-6 from the foul line), were mentally hijacked on a night when home court was supposed to provide a boost to a team searching for its first conference finals appearance since 1979. Washington felt weighed down by the reality of having home-court lightning in its own hands. Pressure made the Wizards sag, instead of enabling their immense talent to soar. That was part of the story.

The other part of Friday’s Game 3 in D.C. was that after two and a half quarters of absolute dreck, Indiana took that mucky mess and turned it into something beautiful. In the final one and a half quarters, the Pacers began to attack the rim instead of settling for the fadeaways and one-on-one plays that reduced their offense to a very hollow shell over the past month and a half. Roy Hibbert’s energy has been a central source of Indiana’s revival, but on a larger level, the Pacers saw the Wizards drooping their heads and slumping their shoulders as the misses — and pained expressions — piled up for a team that is unaccustomed to the May playoff spotlight.

When Washington collectively absorbed the frustration and depression of the moment midway through the third quarter, Indiana finished its screens and cuts, getting layups instead of settling for forced jumpers. Most of this game was an eyesore, but Indiana — thanks to a stellar 18-minute finishing kick — scored 51 second-half points. The Pacers didn’t use any magic tricks. What they did was so simple that commentators often forget to point it out: They competed.

Indiana’s larger problems over the past several weeks have been connected to psychology, and when a team isn’t psychologically right (the source of such dysfunction, not its mere existence, is what has evaded the grasp of pundits), it doesn’t play with maximum effort. Indiana still isn’t executing its offense at a high level — not over the course of 48 minutes each night — but in Game 3, the core of the Pacers’ identity was very much in evidence.

On Friday night, Indiana worked. It hustled. It closed down shooters. It didn’t take plays off. This snapshot of the Pacers at their blue-collar best was missing for most of the Atlanta series and in Game 1 against Washington. It’s back now. If it stays, and the Pacers can polish their offensive sets to the point that the ball keeps moving, the team everyone expected to see in the East Finals will actually get there after all.

Oklahoma City and Indiana haven’t merely “been to the playoffs.” These teams haven’t just failed to win championships. They’ve tasted defeat at a high level, swallowing bitter defeats against the Miami Heat. The Los Angeles Clippers’ full roster and the Washington Wizards’ veteran frontcourt own plenty of playoff experience, but on Friday night, the NBA showed once again that it takes a certain kind of pain to bring forth playoff maturity on the road. The Clippers and the Wizards saw how their opponents reacted in a pair of 1-1 Game 3s. If Los Angeles and Washington don’t learn quickly, these two series are going to end in five games.